BeerMetal Log: Monday, On the 8th day on April, 2013. I find myself really wishing the hours at work would go a lot faster. No, not because I had a case of the Mondays, but because the first kegs of Founders Brewing Company were tapped in San Antonio.

Destination: The Friendly Spot Time: 20:30. Finally, work was over and I headed straight to The Friendly Spot, arriving there around 8:30, ready to see what all the hype was about. Leading up to this day, there were numerous of beer sites hyping up the fact that Founders made their way to the Texas market. I personally, was really looking forward to this, as I had read about this brewery, and their beers, and heard nothing but great things about them. 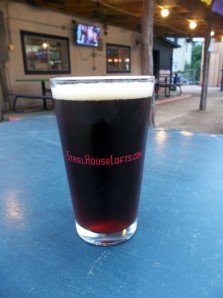 I started off this Founders Night with their strongest beer available in our market, Dirty Bastard Scotch Ale. Why, you ask? Well no scientific reason behind this, only the fact that I walked up to the front main bar there at Friendly Spot and this was the only tap of theirs they had there. The other two were in the new back bar.

Poured from a tap, served in a pint glass. The appearance of the beer is a dark, hazy, burnt brown color with a finger width cream colored foamy head which remained throughout, leaving a nice lacing.

The beer smelled of caramel like malts with an earthy, dirt undertone. I did pick up some butterscotch-ness here as well. There is also a very nice, sweet alcohol smell nostril burn, reminiscent of of a barrel aged beer. My senses were working heavy duty here, cause my mouth was watering in anticipation for the first drink.

First thing that hit me was the strong alcohol taste, but I did not get the sweet barrel aged alcohol taste as the aroma indicated would be there, it was just strong. Not complaining, by any means though, but that did throw me off a bit. This is definitely a malty one with big flavors of caramel, butterscotch, a little like raisins, as well.

This bastard has a heavy body and a surprisingly silky mouth feel. The aftertaste of this beer has a bitter bite with lingering alcohol in your throat and nose.

Overall I would say this is definitely a recent top beer for me. It was very enjoyable, and easy to drink, even for a strong scotch ale. Highly recommended. So with this beer being a bad ass, I went with a bad ass band, with a bad ass song. Dirty Bastard meet Bolt Thrower. The song, “What Dwells Within” is from their 1991 album, War Master, and has been a personal favorite ever since I first heard this song back then.

OK, here is my least favorite of the three Founder’s beers I had this night. Even though I say that, it doesn’t mean I hated the beer, by any means. It just happens that I really like the others a lot more, that’s all. I will drink this one again!

Appearance, the beer was an amber color with a white creamy head that remained, leaving nice lacing down the glass. Great look to this beer!

The smell of pine, citrus  mixed with a strong caramel malt aroma, bread like aroma lingers in the nose.

Taste wise, the hop dankness is first and overpowering. It just has a very strong funk to the taste. Within this dank flavor, there are hints of caramel, citrus, pine, and rye spice all mixed in there. Now despite the funk, this beer is really smooth on the throat, and has a very easily drinkable feel. The creaminess of the head as it hits your lips really help smooth out this beer.

There are a lot of good points in this beer, but one thing I just can not look past and that is that funk I spoke of earlier. Best way to describe this funk that is very dominate in the after taste is that is leaves a body odor like taste in your mouth. Some beer drinkers will beg to differ from my opinion, but I just simply do not like this character in a beer.

What I did here was take a band that has pretty much been awesome their whole career, but they did put put one album that is not liked by a lot of people. I liked the album, and I liked the song I chose, which is why I placed it with this beer. I feel like I’m supposed to like this beer, but I just can’t, almost like the metal fan not liking the album Force of Habit by EXODUS. Here is the song “A Good Day to Die.” 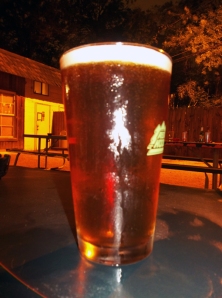 By this time, my buzz was kicking in pretty hard! Must have been the Scotch Ale I started with this evening. I was looking forward to this one the most, so I saved it for last, as I follow the “Save the best for last” philosophy.

This beer poured a very nice, clear copper color with a finger width cream colored bubbly head which quickly faded, becoming a thin ring on top of the beer, though, leaving a soap like lacing around the glass. Again, another impressive looking beer by Founder’s! These guys definitely got the appearance aspect down to a science.

Aroma is of strong citrus that hits you right away, and in fact that aroma seems to continue on. Orange and grapefruit aromas linger in the nose. This beer also displays a good mixture of malt aromas hidden behind the citrus, which for me gives it a spicy wood like smell at the back end. Very nice!

The taste of Centennial IPA could best be described in three words… Very Well Balanced! As with the aroma, there are flavors of citrus, mostly oranges, mixed with a malty background of caramel or toffee. There is a good bitter bite to this beer, which hits you at the tail end of the drink following a slick start. A medium body helps make this beer easy to drink, as it doesn’t feel so heavy in the beer keg of a belly. I can not wait to have another one of these guys!

Now here is a song by EXODUS that mostly all metal heads love, unlike the last song I posted above. I chose this song cause Founder’s redeemed themselves with me with Centennial IPA, and I hope to redeem myself with you all with this song over that last one. So grab yourself a good craft beer and do the Toxic Waltz, Mother Fuckers!

In closing, I will say that I am very happy that Founders Brewing Company made their way down to Texas, San Antonio for that fact. I really hope to one day get to drink their Breakfast Stout, All Day IPA, Devil Dancer Triple IPA, KBS Oaked Bourbon Barrel aged Stout….ah Hell, all of their line-up!

Slam your partner against the wall, BeerMetalDude!