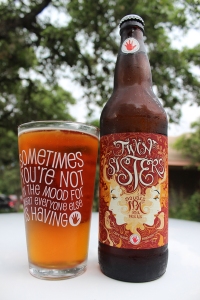 Left Hand Brewing Company out of Longmont, Colorado have been a go to brewery for me. I can say that mostly everything from them that I have tried, I have liked or can at least tolerate it through a whole glass. Their Milk Stout is definitely one of my favorite beers. Yes, even out of all the unique one offs I have had, I will always put their Milk Stout on top the list. It’s just been a beer I can rely on, and always know it will be of great quality.

Well, we are not here to talk about Milk Stout or anything else except for Twin Sisters Double IPA. This is my first go round with this beer, and I can say that the beautiful beer label is what drew me in at first when I saw it on the shelf. I am also a hop head, and love me some good IPAs, especially Double IPAs or Imperial IPAs.

Using my Left Hand Brewing Co. Wake up Dead Stout pint glass, this beer poured a very nice looking clear brass color with a thin white head, which dwindled down to a light ring on top the beer, which stayed in tact through the session, but did leave little to no lacing down the glass. There was a bit of cloudiness to this beer, but It was mostly chill haze on the glass, but the beer was actually quite clear.

The aroma of this beer was all hops. Five different hops were used within this bad boy which include Sorachi Ace, German Magnum, Cascade, Mt Hood, Wilamette, and then dry hopped with Mt Hood and Cascade. You can definitely pick up on the mixture of hop variety in the nose with this beer. I pick up a lot of citrus, like some good oranges and zest, and some grapefruit aromas. There is also a fair share of earthy, floral aromas as well mixed in. I do pick up quite a bit of a caramel like maltiness to this beer, but for me it’s not overpowering like I have read. My nose wanted hops and it found hops. I also pick up on a booze aroma, which gave my nose a little burn.

The taste follows the nose as with most good beers do. This one has a strong citrus, grapefruit taste that hits you right up front, and lingers throughout the sessions. There is a caramel-like malt background here, giving this beer a little depth. At the end of the drink, there are some floral, earthy flavors and some booze. I mean this is a damn near 10% beer, of course a boozy aroma/taste combo was going to show up. I am just a happy camper though, that this beer was not danky, or have that body odor funk that others seem to have. I am more of a citrus hop guy than the other, that’s for sure. This beer is definitely bitter, and has a bit of a bite to it.

The body is of medium thickness, good carbonation, has a bitter bite, and leaves your mouth a bit dry at the end. The mouthfeel while drinking this beer is soft and somewhat creamy at first, then my throat was hit with a good crisp bite, and a little dryness at the end. 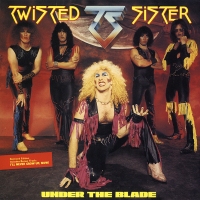 Metal Connection: Twin Sisters made me quickly think about a band with the word sister in it. Yes, I am talking about none other than one of m favorite 80’s Hard Rock/Metal bands, Twisted Sister. Of course, I feel that Mtv and mainstream radio ruined bands like this, because they made two mediocre songs into rock  n roll icons with “We’re not gonna take it” and “I wanna Rock”, while the band actually had a ton of other great songs, but not by popular demand. Well you mainstream so called Metal heads can suck it, and here is a classic song that I bet no one in your family knows! Bust out the denim jackets, with patches and pen drawn band logos, and prepare to bang your head! Here is the song “Destroyer” from their debut album, Under the Blade from 1982.