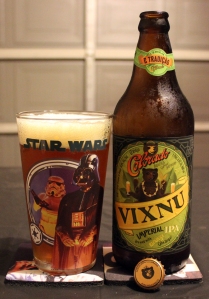 I really do enjoy finding new beers at the ‘ol beer stores that I frequent pretty much weekly. Here is no exception with Vixnu from Cervejaria Colorado from Brazil. I was immediately drawn to their 660ml sized bottle and label. The label features the Cervejaria Colorado bear logo in the form of Vishnu, which in Hindu mythology is the god responsible for maintaining the universe. One common representation of Vishnu, it appears floating floating on the waves with his four arms , each hand holding one of his divine attributes: one shell , a disc of energy a lotus and staff. Well on this beer label, their version of the Vishnu or Vixnu is their bear logo with four arms, two of which are holding full beer glasses, one holding a hop cone on a vine, and the last holding some barley. I was very excited to have this beer in my collection as this was the first beer I have had from this brewery out of Brazil.

I enjoyed this beer while using one pint glass from my Star Wars glass collection. This beer poured a slight hazy amber color with about a thick two finger cream colored head. For me the head retained the entire drinking session, leaving an awesome amount of lacing down the glass.

The aroma of this beer has a good combination of malts and hops. I was able to pick up some hints of pale malts, caramel, citrus fruit hops, and a touch of sweetness. I was a little disappointed in this not having more of a hop aroma, as I would have expected from a Double IPA. There definitely was a well balanced aroma, as the malt smells came through first, then a hint of sweetness, like brown sugar, which I’m sure was caused by using rapadura in the beer, which is basically a solid piece of pure sugar cane. The hops come through at the end, leaving a bright crisp citrus/lemon-like burn in the nose. The lingering aroma of the citrus fruits are met with a boozy smell.

Taste wise, of course followed the nose, as flavors of malts, sweet sugar, and hops all made an appearance. This time though, the sweetness and the malts hit my palate first. In fact, the sweetness was left behind on my lips after each drink. The malts really hit in mid gulp, and the fruity, citrus flavors from the hops hit at the end, and in fact linger around the throat a bit, along with a boozy flavor, giving me a slight burn at the end.

The body was a light-medium thickness. The beer went down with a creamy silk-like mouthfeel, with an alcohol bite at the end.

Overall, I will say that although I enjoyed this beer, it definitely will not be one of my top beers. I thought it was a bit too malty for a Double IPA. I did, however, balance my rating of this beer cause of the sweetness, which was a very nice touch.

Metal Connection: I am sure I could have gone in a different direction, as there are several Brazilian Metal bands who I could have chosen for this article, but I went with a classic band known as VULCANO. This band was one of the first Metal bands in South America, dating back to 1981. Here we are 30+ years later, and Vulcano are still popping out the heavy jams. Check out a song, “Aninhilate All Of Them” from their 2013 album release, The Man the Key the Beast.