On Saturday, September 14th, the misses and I find ourselves driving to Houston, TX to pretty much do “beer stuff” all day long. It was a hell of a fun trip, and I am so glad we decided to go.

When we first got to Houston, I find myself driving in old familiar territories from my band days. Funny, how I could probably drive to certain spots in that town blind folded. For years though, I had what was called the “Houston Curse.” For several shows, mostly while I was in the bands Putrilage, and Exulcerate, every show we had booked in Houston, we would have to cancel for a variety of reasons. The reasons for cancelling were all legit reasons, and out of our control, from trucks breaking down, to illness. Well, here we are in 2013, and I am now leading a different lifestyle , so this Houston trip was met with nothing but good fortune and good times!

The first place on our beer drinking route was to Karbach Brewing Company since they offer tours/tastings on Saturdays. Karbach is quickly becoming one of my favorite breweries, as everything they offer that I have had the chance to drink has been met with nothing but satisfaction. These guys really put out high quality craft beer. Upon arriving to the brewery, I am impressed with the size of the warehouse that they had taken over to open their brewery. The outside of the brewery was a nice sized picnic area with a lot of tables to sit at, and plenty of room for them to hold a bunch of fun ideas. Food trucks could easily park on the grounds. The inside of the brewery was massive, and was set up quite nicely. Every inch of their building was being used, and there were several rooms, all housing equipment being used to make their beer.

I was able to get try a couple of new beers to me, but I also went with some of the goods I have had before.
The goods…
Hopadillo IPA – So hop heavy, it’s awesome! Dry-hopped for added hop flavor and aroma.
Weisse Versa Wheat – According to their website, this beer is a good combination of a Bavarian Hefeweizen and a Belgian White. One of my favorite Wheat Beers.
Sympathy for the Lager – This beer drew me in right from the start cause of the name, and awesome logo on the can. I love the song Sympathy for the Devil by The Rolling Stones, so it was easy for me to be drawn to this beer.

New beers for me…
Karbachtoberfest – Karbach’s version of this authentic, classic Bavarian-style Marzen. I really enjoy this style of beer, and these guys nail it spot on. Excellent Marzen, or Octoberfest beer.
Pro Am Tripel – Karbach held a contest at the beginning of 2013 for home brewers to come up with a Belgian Tripel. This was the winning beer, and will be a beer made regularly by Karbach. This was one of the first times this beer was available for tasting at the brewery, so the contest winner, Emory Steiner was on hand this day. I did stop and talk to him a bit, and he told me that this was all his recipe and it was the very first time he had ever brewed a Tripel. Way to go man, awesome job!

It was great to finally get to explore the brewery. I t was great to see David Graham again, who I had met when Karbach had a tap takeover here in San Antonio earlier this year in July. I definitely want to make another trip out there again. 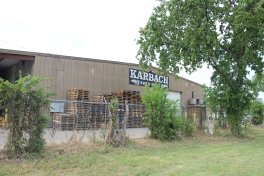 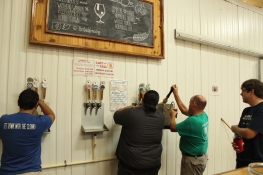 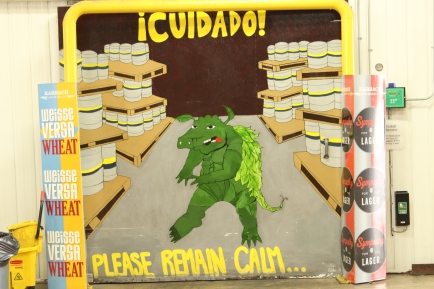 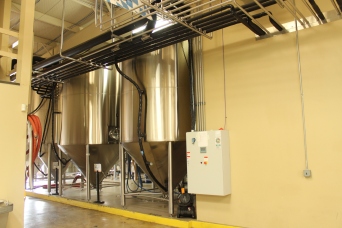 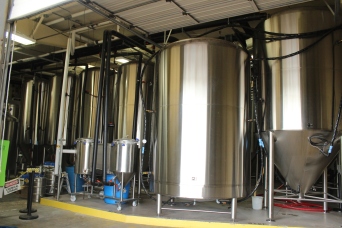 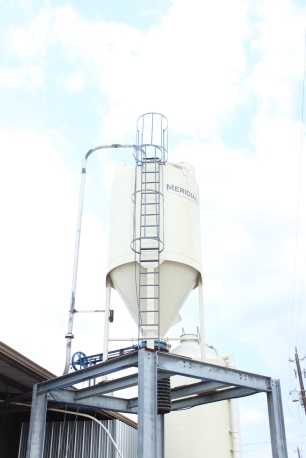 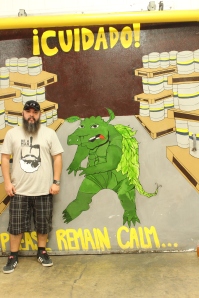 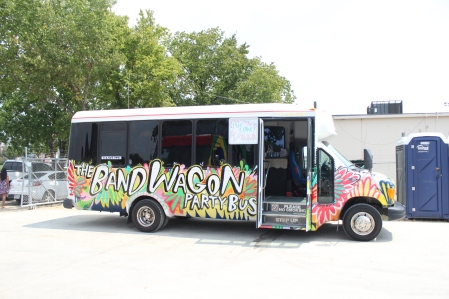 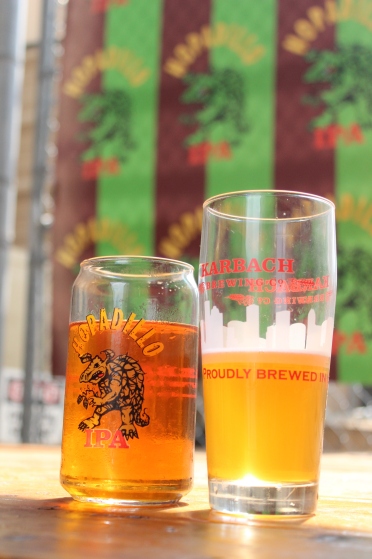 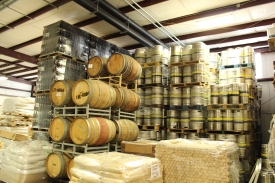 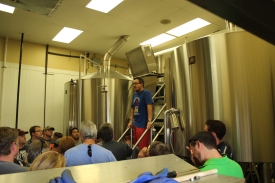 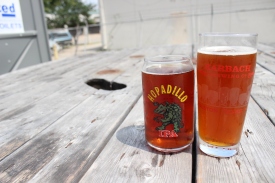 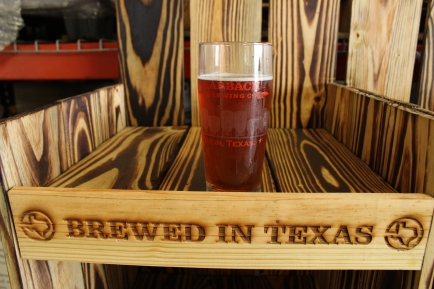 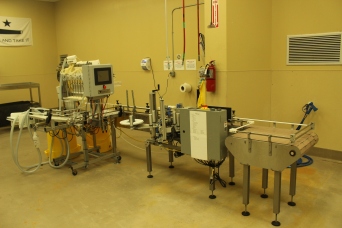 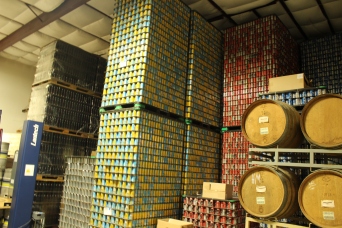 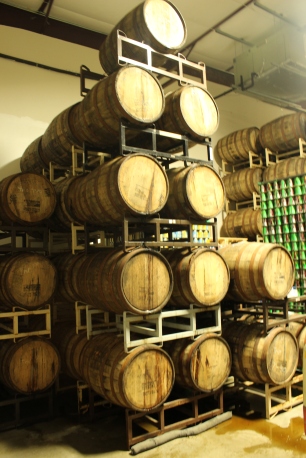 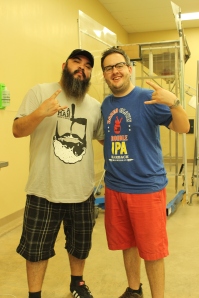 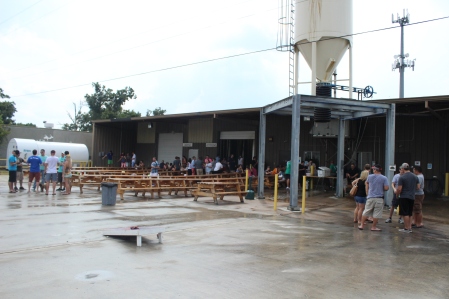 Our second stop of the day was to get some food in our belly, along with more craft beer, so we visited The Petrol Station. For a long time now, I have heard nothing but great things about the food and beer selection there. I was completely amped up to try to it. Upon arrival, I was taken back a bit on how small this spot is. I didn’t know what to expect, but I definitely wasn’t expecting this small looking corner store gas station turned beer bar/restaurant. The place did have an excellent outside area with more tables, which is where we sat, enjoying the beautiful day it was that day.

Inside the restaurant, there were a few tables lining the walls, but majority of the place is the main bar with a good number of taps on their wall. Not only does Petrol Station carry excellent craft beer, they also cook up some delicious food. I had ordered the Lamb Burger, which was a 1/2 lb blend of ground lamb and Angus beef served with feta cheese, cucumbers, bibb lettuce, red onion, and Mary’s yogurt dressing. I was recommended by many to try The Rancor Burger, so I will have to try that one next time for sure.  As you can see from the name of that burger, that this place also won very cool points from me cause of the use of Star Wars references. Their beer menu on the wall also uses Star Wars as the lower ABV beers are under “Younglings”, the mid-high ABV beers are under “Padawan”, and the strong, high ABV beers are under “Jedi”. All three of those names describes the life a JedI Master from a kid all the way to Master.

The Lamb Burger that I ordered was simply amazing. One of the best burgers I have ever had. I only ordered one beer while there to wash down the food. I had Sierra Nevada Beer Camp #94 Belgian-Style Black IPA. It was my firs time enjoying this beer, and in my opinion, it went perfectly with the burger. I will definitely want to go there again and try a different burger, and get a few more beers, but for me, at least I was able to finally go there. 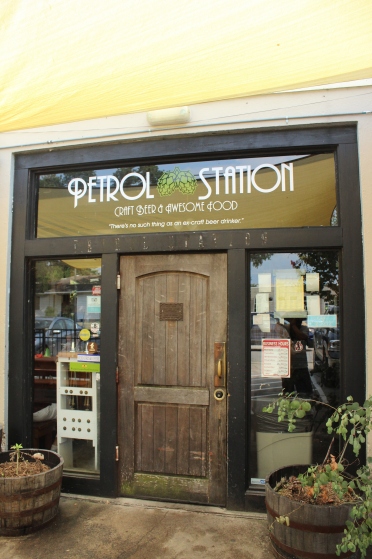 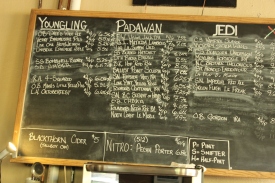 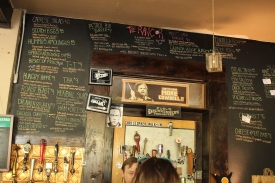 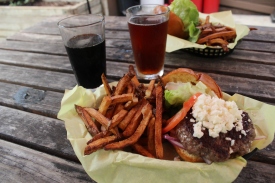 Our third stop of the ay was to a new and exciting brewery called 8th Wonder Brewing Company. The brewery is named 8th Wonder after the old Houston Astrodome, which was opened in 1965. The Astrodome was the first ever domed stadium, and was dubbed “The Eighth Wonder of the World.” Right now their beers are only available on draft, and only found in craft beer spots around the greater Houston area. As their website clearly says, they are located only blocks away from the Astros, Dynamo, and Rockets stadiums, 8th Wonder is the craft beer for the home team.

I am always searching the net for new breweries around, especially here in TX, so I had already come across the site, and info for 8th Wonder, so upon arriving there, I was really excited to sample their beers. They are located in a smaller warehouse location than Karbach, which we visited earlier this day, but size does not matter in the beer world! I was pleasantly surprised by how good their beers were. Right now they don’t have a massive collection of beers, so only a select few were available for tasting this day.

Beers I sampled (full pint glass pours are hardly a “sample” by the way…)
Intellectuale – A Witty Blonde – They describe this beer as being a cross between a Wit, a Blonde Ale, and a Belgian Golden Ale.
Feight (pronounced like Fate) – According to their site, due to a grain shartage they had to come up with a new recipe for an easy-drinking malty beer, so Feight was born.
IP8 – This is a Belgian Double IPA at 88 IBUs, and 8.6% ABV. Nice, hoppy, and boozy.

After a few rounds, and touring the brewery, listening to brewer, Aaron Corsi give an in depth talk about how they make their beer, and attempting to still be somewhat “cool” by closing time, it was time to move on and leave this awesome brewery! I did however have a great time trying to convince the staff to pour the spill bucket into glasses for us to drink! I also really wanted some 8th Wonder Merch, but they did not have any shirts in my size, XL or XXL depending on how skinny the material, or how hipster the shirt is. I don’t do tight or athletic fit shirts. Nothing about me says athletic! I need thick material, beefy-T’s. I hate the material so skinny that you can see through it. OK, sorry, went off on a rant there. Anyway, I did end up with a nice fitted Houston Texans baseball cap, courtesy of co-founder, brewer, Ryan Soroka.

I am looking forward to having more of their beers, especially their BrewGK, which is a Brown Ale brewed with Red Delicious Apples in the mash, plus added spices, and Belgian candy sugar. Interesting fact here, this was a collaboration beer with Bun  B of the Texas Rap group, UGK. Yes, even the BeerMetalDude knows about some Texas rap.

The last spot we visited this day, The Moon Tower Inn was recommended by the 8th Wonder crew. I did drink, well check into two beers while there, Bear Republic Racer 5 IPA, and Lone Pint Brewing Yellow Rose. As I am a collector of merchandise, I asked about getting some shirts, and to my amazement, I was handed a bundle of different shirts from these guys. Some are a bit big, as they are 3XL, so not sure exactly where I will where those at, but there was a couple in my size, and I have worn them proudly around town already.

The Moon Tower Inn is made up of two large shipping containers turned into a bar and restaurant kitchen. These containers are in an L shape around a building, which looked like it was holding brewing equipment, making this where they brew their own beer for the bar. The seating area for the guests is all outside, with a few tables being under a roof, and the rest are spread out in a large grassy area in the back. Since my visit there, I have been to their Facebook page, and seen many photos of their food, and Holy Shit, do I want to go back there right now and eat there!

I want to do this place more justice and do a proper write up after another visit, cause a lot of this place is a big blur to me. I know we were out on a front patio area talking beer, metal, food, and other crazy shit with the staff. I was told that all the conversation we had was very interesting. 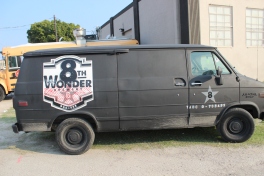 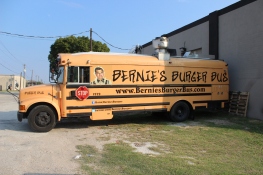 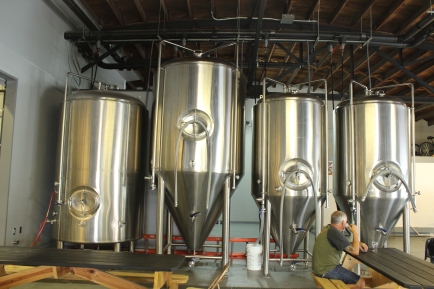 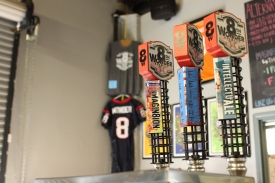 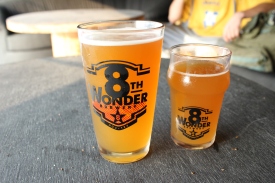 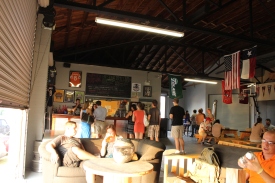 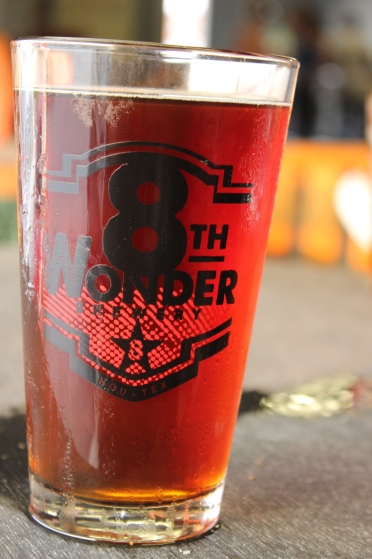 Overall, this was a great day for us, and we can not wait to do it again. This day was full of beer, great food, drunken, unremembered conversations, free merchandise, What more could you ask for! Cheers to everybody new we met on this trip from other patrons at these locations, to the staff that showed us great hospitality everywhere we went. Houston, TX, you make me proud me to a Texan! Cheers!