I had seen this bottle art floating around the internet for months, and thanks to my friend, Jorge of the website brewerianimelogs, I was finally able to get my hands on 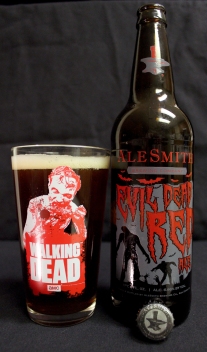 one. This was the first time AleSmith had bottled this beer, as it was only available on draft previously to this. I feel pretty special that I was able to get this limited released bottle. I was very excited for this, as this was also my very first AleSmith beer, ever!  The fact that I am a Metal Head, and a Horror movie fan, I am always on the hunt for beer labels that are a bit macabre, and dark. This zombie filled beer label fits right in here on BeerMetalDude.com.

What better glassware to use than my AMC’s The Walking Dead pint glass that I purchased last Halloween. EDR poured a reddish brown, mahogany color. it was a bit thick looking, but not all the way opaque. There was a little bit of clarity there. The beer was topped with a tan colored frothy finger wide head. The head retained throughout the session, leaving beautiful, er, I mean fucking deadly looking black widow spider webs down the glass.

The aroma is well balanced with hops and malts. First and foremost the scents of pine, citrus like oranges and grapefruit, light tropical fruit like pineapple, and grass are present from the hops used in this beer. There is a bread-like smell mixed with some toffee and caramel, accented by a toasty aroma. Very well balanced.

The taste follows the nose for sure. All hop characters hit the palate first. This has a nice buffet of hop flavors like pine, grass, orange citrus, grapefruit, and tropical fruit. The flavor is well balanced with a backbone of malt characters like toasted bread, toffee, and caramel. The aftertaste is sweet and bitter, and not one flavor is overpowering to the next, so the hops and the malt characters remain as one. As it warms, the boozy presence is abundant.

The body is a medium-full body as expected judging by the appearance. The mouthfeel is rich and creamy with a bitter bite up front with a dry finish at the end. There is a remaining stickiness on the lips after each drink.

Overall, I will say that I was rather impressed with this beer. I had high hopes going into this session, and it was met. My only gripe is that they call this an American Amber or Red Ale, but this beer definitely drinks more like an American IPA. Maybe calling it a Red IPA would have been more suitable. All i know is, I was happy as Hell to have this bottle in my collection. I look forward to getting it again later this year. It will be out by October, just in time for when The Walking Dead comes back. 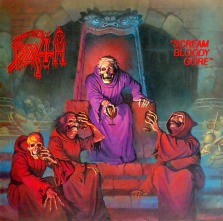 Metal Connection: I knew exactly what I wanted to pair with this beer even before I had it in my possession. I chose one of my favorite Death songs for this one, “Evil Dead” from their debut full length album, Scream Bloody Gore. This iconic band released this classic album in 1987. The song “Evil Dead” appeared on demo tapes dating back to 1984, when they were known as Mantas. Mantas/Death was known for being one of the very first bands in the Death Metal genre. Scream Bloody Gore was evil,  full of gore, and was just down right sick! Yes, the band Death progressed over time to a technical progressive band, but they still remained a major influential band to many people of all ages starting Death Metal bands throughout the time span of their career. Of course the band is no more, due to the death of guitarist/vocalist, Chuck Schuldiner. So, let’s take a trip back in time to 1987 for this one. I was only 9 that year, but yet these guys released this raw, fast, evil genius of an album. Let’s all Scream Bloody Gore!