It is that time of year again folks, that time when all the planets are aligned, all is right in the world… well, at least my world! It is time for Real Ale Brewing Company to celebrate another year of life. In my opinion, one of the best breweries in TX just turned 18 years old, so they are legal now. Now I don’t feel so dirty spending all night with them. haha!

Even though this is the 18th anniversary for the brewery, this is only my second time attending one of their parties. I went last year, and it was amazing. So, I was getting really excited as the date for this year’s party got close. I was ready to drink, and party with the like minded people who are the craft beer drinkers of Texas!

The party was held on Saturday, April 19th on the grounds of the Real Ale Brewing Company, which is tucked away behind the massive downtown area of Blanco, TX. The hard working volunteers, once again led us into the nearby field to park close by the brewery, just like last year. As we walk up to the brewery, we noticed a significant change in the layout of the beer booths. It looked a bit more organized, which it turned out to be. There were draft beer booths outside the brewery on separate sides of the building, as well as a beer can booth. Inside the bottling/canning room they had a table set up where they were pouring special casks throughout the day. Of course this area had the longest line, which never seemed to dwindle down. I saw a lot of people getting a beer, than going right to the end of the line to get their next cask beer. I am grateful for the friends I have in good places, as I was able to get my hands on a lot of good tasting beer before it ran out, and for that I thank you. You know who you are!

As I am only human, and seriously could not drink every single beer that was available this day, I was able  to down some pretty fine choices!

After full glasses of these six beers, I was pretty much done, well sort of…  I was able to taste a handful of other beers while there as well, but just did not have full glasses. These were: Cafe De Olla Coffee Porter (cask), Four Squared (Cask), Real Heavy with Heather (cask), Mysterium Verum: Benedictum, and their 18th anniversary beer, which was a Gose. This was my first time having a Gose style beer, which is an unfiltered wheat beer that is brewed with the addition of salt. I wasn’t sure how I was going to like this beer, but it was pretty enjoyable, and definitely a style I would like to try again.

During my time there, I ran into a hell of a lot of friends, co-workers, and customers of mine from the bar I work at. I was pretty occupied with drinking the beers at hand, that once again the musical acts did not excite me enough to really pay attention. I’m sure there were some good bands that played, though. As the fun continued throughout the day, the last thing I thought about was snapping pictures, so unfortunately there aren’t a lot of photos for this post.

Another year has past us, and I look forward to another year from Real Ale Brewing Company. These guys have always been one of my favorite breweries from Texas, and with good reason. They make excellent beer! The staff at the brewery is an added plus, as some have become good friends of mine, and acquaintances through the love of both Craft Beer and Metal! I will now prepare my liver for Real Ale’s 19th Anniversary party in 2015! BRING IT ON!!!! 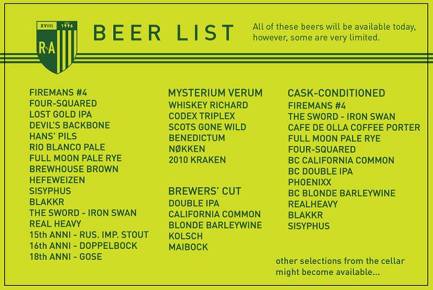 I had to capture a photo of this lady sporting a Blakkr t-shirt!

Here I am with two really cool guys (Chris & Michael) who always visit the bar I work at. These guys have amazing bottle share events!

a random drunk shot of the crowd! Hah!

posing with one of my cool as shit co-workers, Kelsey and her girlfriend, Pamela! She’s afraid of Metal! hahaha!