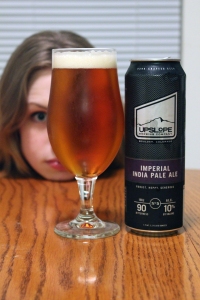 About a year ago, we here in San Antonio, TX were treated to a new brewery from Colorado making it’s way to our store shelves and bar taps. I am referring to Upslope Brewing Company from Boulder, CO. Usually when a new brewery comes into town, there is a big stink about it around town, but these guys quietly took up shelf space in our local bottle shops and grocery stores without a peep. Their cans are a little eye catching with the colors they chose, especially on this particular beer I am reviewing. Upslope’s Imperial IPA comes to us in a nice sleek looking 19.2oz tall can that has black and gray as the base color with a bright purple label on it, and a shiny silver  logo. I could see this can from afar as I walked up to the beer isle.

The day I had this beer was an exceptionally fun night, as we had our good friend Halie in town, and as you can see, she made her way into the photo on this one! She is an awesome artist, so if you need, or know anybody looking for some art, please contact her. Check out her awesome artwork here. Soon, a custom piece will be gracing the website. Can not wait to see the final product!

Now the beer… I used a non branded tulip style glass for this pour, and the beer looked amazing! Of course there was a bit of a chill haze on the glass, but once it warmed up a bit the beer was crystal clear, and had an orange amber color topped with about an inch wide frothy white head. I did see some bubbles rising within the beer, but not much. decent carbonation present. Great head retention, though, as there was sticky web-like lacing down the glass as this beer went down.

The nose is big on this beer! Right up front there is an abundance of hop aroma mixed quickly with a nice alcohol boozy burn in the nostrils. Some beers hide there high ABV, but not this guy! This beer screams “Hey, I’m strong, and I’m going to fuck you up tonight!” Ha ha! The aroma is a fruit bomb from the hops. I can easily pick up on smells of melon, apricot, mango, and grapefruit, with a nice orange citrus undertone. There is a good malt backbone under all the fruit hops. Hints of biscuit, a bit woody, and a  light caramel aroma are present. Keep in mind that the strong alcohol boozy burn layers over this all!

The taste follows the nose pretty accurately. All the same characteristics that are in the nose are present in the taste. The hops are again, right up front with flavors of tropical fruit like melon, mango, and mixed with hints of apricot, grapefruit and orange. Now, keep in mind that when I say things like this, it doesn’t mean it’s just exactly like biting into one of these fruits, but rather a flavor profile of these fruits show up caused by the added hops to this beer. I know, a lot of you know this, but I am stating this for those new to reading craft beer reviews. Malts and grains take a second act here on the palate showing off flavors of caramel, biscuit, and a wood-like taste. As with the aroma, the 10% ABV is present with a nice boozy presence on the palate.

This Imperial IPA has a nice medium body. The mouthfeel is crisp with mild carbonation, and a bitter dryness at the end. This one drank a little easier than most other DIPA’s I have had. 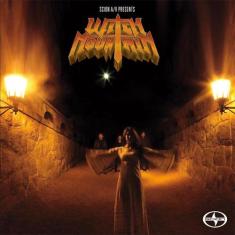 Overall, I was very impressed with this beer from Upslope. I have had the pleasure of having a few of their beers, which will grace the website soon enough, and so far each one has been to my liking. I look forward to having another can of this beer in the future.

Metal Connection: The Upslope logo features a mountain on it, so I immediately dug up a song from Portland, Oregon’s Doom Metal band, WITCH MOUNTAIN. These guys (and now, gal) have released 3 full length albums, and 2 EPs since they formed in 1997. Their last offering to date is from 2012, which was  a self titled EP, which featured 2 new songs at the time, and was released through Scion Audio Visual. You know, that car company who became cool for releasing a bunch of Metal stuff through a record label under the same name. Here is one of those two tracks. I offer you “Bloodhound” for your listening pleasure while reading this beer review. Enjoy!