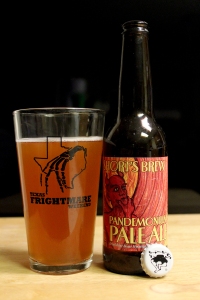 Short’s Brewing Company is one of those breweries who’s beers have been talked about in a lot of forums, and circles of beer geeks around the world. I first heard of Short’s because of their unique specialty fruit beer known as Key Lime Pie, a beer brewed with fresh limes, milk sugar, graham cracker, and marshmallow fluff. I really wish I could get my hands on that one!

The first time I had Pandemonium Pale Ale was at a bottle share, and I was able to get about a 2-3 ounce pour. Luckily, a whole bottle was given to me so I could enjoy this one in full form. Of course, I was happy to have this one in my collection, as I love the artwork on the label.

For this session I decided to use my Texas Frightmare Weekend pint glass from 2013. This Pale Ale poured a nice copper color that started pretty hazy, but later cleared up as it warmed up a bit, leaving this beer with nice clarity. It was topped with a 1/2 inch white foamy head, which quickly faded to a thin layer, which remained on top the entire way down, leaving excellent stick, web-like lacing down the glass.

The aroma of Pandemonium was a bit mild, but featured a great mixture of malts and hops. The hops are present as they should be, but in this case they are mildly showcased. The hop profile I was able to pick up on was that of a sweet fruitiness, slightly citrus-like, and dried apricot. There was also a light grassy smell. The malts came through with a caramel, toffee, slight butterscotch aroma.

The taste definitely has some bitterness to it. The hop profile hits the palate first. Citrus, orange and apricot mixed with a little grass are right up front. There is mostly a caramel undertone with a slight hint of toffee and butterscotch. There is a nice bitter bite at the end with a lingering toasted malt aftertaste. As strange as it sounds, the aftertaste reminds me of tortilla chips or burnt tortillas.

The body is a medium thickness with a soft, creamy mouthfeel. There is a stinging bitter bite at the finish, which helps bring out some interesting flavors at the end. Mild carbonation is present.

Overall, I will say that I am pleased with this beer, but as you can read from my site, I am usually pleased with most to all beers. It really takes a lot for me to find faults in a beer, and at that point, that beer should really be re-evaluated. ha ha! I was searching forums for this tortilla chip taste I am getting in this beer, and I read that it could be caused by DMS (Dimethyl Sulfide) which is something present in some degree in all beers. Some may be stronger than others. I did read about DMS flavors being caused by infection, but than it would be more of a cabbage-like aroma/taste. I am safe to say that this beer was not infected. Information was found here. I would like to get my hands on this beer again to give it another shot, and see if a new batch would be any different. Either way, I still gave this beer a 4/5 rating, cause I really enjoyed it.

Metal Connection: Maybe a song from Celtic Frost’s Into the Pandemonium? Nah, I went with a song from one of my favorite bands, NAGLFAR. The band comes from Sweden, and has been active since 1992, producing Melodic Black Metal with six full length albums, and a good number of demos and EPs as well. The song I went with for this Metal Connection is their song “Force of Pandemonium” from their 2003 full length album, Sheol. Naglfar is one of my favorite bands cause throughout their career they have been able to produce top notch albums chock-full of memorable songs. Just like Force of Pandemonium with the catchy vocal patterns, awesome riffs and well put together song structure.