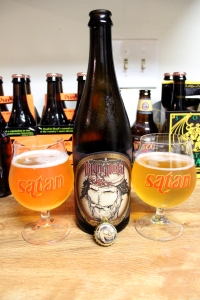 At the beginning of the Jester King career, their beers were easily found at most of the craft beer hot spots around San Antonio, then they pulled out of distribution or something and made their beers only available at the brewery itself during their open house hours on the weekends. Even now that they have received new distribution, not all their line-up is available at stores. When Viking Metal was released it was during the time of no distribution into San Antonio so it was hard to get my hands on a bottle. It wasn’t until my friend Rick, owner of Lone Star Beverages told me that he had a few bottles of Viking Metal in his personal collection, and that he was willing to part with one for me. Of course that meant I would have to drive to the Dallas area, but that was OK, because we do this trip at least once a year attend The Texas Frightmare Weekend. Now, seeing as I had the pleasure of having a bottle of Gotlandsdricka long before the website was born, I was really excited to get Viking Metal, as it is a Gin Barrel-Aged version of Gotlandsdricka.

I was almost certain that I would never see a bottle of this beer in my hands, so I was really happy to know that I had a good friend up in North Texas. Viking Metal is another release in Jester King’s Metal themed beers. The others are Black Metal, Thrash Metal, and Funk Metal. As you all know here at BeerMetalDude.com, we only exist to promote the best in Craft Beer and in Metal music. This beer was a must for me to include on this site. The best statement on the Jester King website is “Why metal themed beers? Because we like metal, and it’s fun.” I wholeheartedly agree!

I shared this bottle with my best friend, Jason Gonzales, Head Brewer behind Mad Pecker Brewing Company. We each poured this beer into a Satan snifter glass. The beer’s appearance was a semi-hazy bright golden color topped with a thin white layer of foamy head. Decent head retention throughout, and a nice web of sticky lacing.

The aroma is very complex. There are hints of the sour funk, some dry tartness, some smoke, bright crisp fruits like citrus, lemon zest, even some woody, earthy smells. For me, the smokiness was dominant. Followed closely by the tart sour funk. The nice surprise was the earthy, woody, spiciness that left a dry feeling in the nose at the end of the whiff.

The taste is almost identical to the smell with one major exception, and that is that the sour funk is more dominant in the taste than in the nose. There is an upfront hit of brett sourness that remains and lingers throughout the entire swill. Right behind the sourness a semi-strong flavor of smoke hits the palate, followed by the fruity notes of citrus, lemon, and the tartness of the juniper berries. There are nice earthy, woody, spicy characters as well. Nice, dry lingering aftertaste of funky sourness.

The body is a medium thickness with a mouthfeel that is smooth, silky, and crisp with a good dry finish. There is a good zing to this beer from the sourness, and flavors of tart berries.

Overall, I was impressed with this beer. I do recall liking Gotlandsdricka , so not only did the name of Viking Metal intrigue me, but the act that this beer is a Gin Barrel-Aged version of the original, really made me want to get my beer loving hands around this bottle. If Jester King ever decides to release another batch of this beer, I will make sure to get more than one bottle. I recommend you do the same. 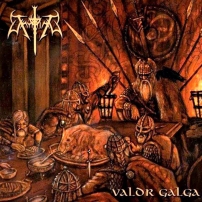 Metal Connection: I could have made the obvious choice and choose the world’s favorite Viking themed band, Amon Amarth, but I did not want to do that. Instead, I went with a tune from the 1999 full length album, Valdr Galga from the Swedish band, Thyrfing. The song is called “A Moment in Valhalla,” and the subject is just that, a tale of the warriors journey into Valhalla. a nice song about the afterlife of drinking and debauchery that the fallen Viking warriors face when in Valhalla. A Perfect fitting themed song to go with this amazing beer which played tribute to an old ancient style of beer brewed once by the Vikings. All hail Viking Metal!!!!

Horns raised and filled with the finest of mead
Valhalla’s warriors battle succeed
The lodge so enormous, so many in here
Valkyries serve us the best flesh and beer
Forever we’ll sit here, to eat and drink well
All of us heathens on a battlefield fell
Our death went divine to Valhalla came
Another brave name for the golden hall’s fame