Hey, like Far out, man! Hop on the bus, and let’s take a ride down trippy lane, shall we. Sorry about that, it must have been the free-spirited power that comes right off this label for Kind Ryed, a Rye IPA by Otter Creek Brewing Company  from Vermont.

This was a nice surprise of a beer for me. My friend Jennie brought me back some bottles when she took a business trip to Maryland, and this little guy was part of that pack along with some other amazing beers that will grace this website one day. This is the first time tasting any beers by Otter Creek, so I was very excited to try this beer.

I used the IPA glass for this beer. The appearance of this beer looked very refreshing. Mouth watering, even! Kind Ryed poured a hazy golden orange color crowned with an inch thick white frothy head, which decreased down a bit, but stuck around for a bit, leaving an excellent sticky sheet of lacing down the glass throughout this session. The beer was a bit dirty, as it is unfiltered, but definitely not a bad thing.

The nose was mostly hops as well it should. It is an IPA, after all. Here, we have a nice blend of grassy, piney, some orange zest and a bit of a resin aroma up front. I didn’t pick up on any tropical fruit notes as expected, but that’s OK, this beer still had an amazing hop aroma. Besides the hops, there is a good backbone of malts on the nose, along with a peppery presence, and white bread loaf.

The taste follows the nose with all the same characters. Good hop profile hits the palate first with flavors of grass, pine, orange zest, and a bit of danky resin. There is a good amount of bread and malts present. One of my favorite things about Rye IPAs is the Rye itself. I like how it makes the beer taste, and that it shows up on the aftertaste, and leaves a nice dry feeling.

Kind Ryed has a medium body, and a mouthfeel that is chewy, but easy drinking. There is a fantastic dry finish on this beer from the rye.

Overall, I was impressed by this beer. I had high hopes going into this session, and I was not let down. I hope that I can get my hands on other beers by Otter Creek, some others look very interesting. 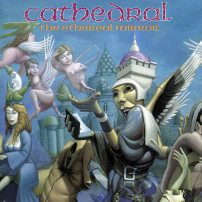 Metal Connection: For this pairing, I went with an old favorite of mine, both in band and in song. The tag line on this beer is “Hop on the Bus!” Otter Creek is wanting us to take a ride with them down Craft Beer Lane. The traveling music will be handled by England’s very own Doom/Stoner Rock masters, Cathedral, and their groove heavy hit, “Ride.” This song comes from their 1993 full length album, The Ethereal Mirror, which was the band’s second album, and first to be released on the major label, Columbia Records, back when they snagged up a good handful of underground Metal acts, which I believe, did not work out for them, since most of the bands they picked up only released an album or two, then right back to small, underground labels. I have been a fan of Cathedral ever since 1992, when I first heard their song “Soul Sacrifice” on a local college radio station. I was privileged enough to witness a live performance back in the 90’s when they did a US tour. I wish that I still had that damned tour shirt!