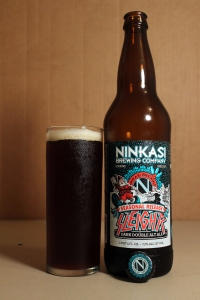 SLEIGH’RRRRRRRRR!!!! OK, I’m sure all of our voices are ruined by doing our best Tom Araya scream, because let’s be honest here, you all did it once you gazed upon the Sleighr logo on the bottle which, of course, resembles the logo of the Thrash Metal legends, Slayer.

A couple of years ago, a friend of mine from Austin first showed me this beer a couple of years ago on Facebook. She went back home to Oregon and brought back a few 12 oz. bottles of Sleigh’r. As usual, shit came up and got in the way, and I never met up with her to get my bottle that she was saving for me. All hope was lost that I would ever get my hands on Sleighr, seeing as it is not distributed down here to TX. Let’s fast forward to now, where I have a great friend who never let’s me down, Jorge Espinoza of the website, brewerianimelogs. With his help, this beer finally made it to me, and now I am happy to share with you my thoughts on this brew. Just like the Santa on the label, I too was throwing the horns and thrashing around in the snow out of excitement. Well, not the snow part sine that never happens here in San Antonio, but you get the idea.

As this beer is an Altbier, I used the recommended glassware, a stange style glass. The beer poured a clear, dark cola caramel color that was crowned with a half inch, off-white foamy head. Good head retention as the head stayed around for quite some time as a thinner top, leaving excellent spotty soap bubble lacing down the glass.

Sleigh’r is pretty much malt driven on the nose. Caramel mostly, mixed with a bed of wet grain, and toasted malts. Subtle hops are picked up, with an earthy aroma. Some fruit esters like plum and the like, but very subtle though. Very faint chocolate. Brown sugar, molasses and a strong bready biscuit is the backbone of this beer’s aroma.

Taste is similar to the nose, which of course is a huge plus for me. No surprises! Sleigh’r has a good dark lager overall taste going on. Strong caramel, toasted malt flavor up front. Body of a crisp lager, bready biscuit. Subtle chocolate flavor shows up again, giving this beer a nice smoothness. Very faint earthy hop profile is present, but it is there. There is a good bready aftertaste.

Nice medium body, with a crisp, refreshing mouthfeel, and a dry finish.

Overall, I was an instant fan cause of the name of the beer, so I was really hoping that the beer would live up to this hype for me, and Ninkasi did not disappoint. I am not just a hop head, like most people out there, so I will find the good in all styles of beer. I have had other Altbiers, and I can definitely say that I am a fan of this style. It is an easy drinking beer that will not kill the palate, so you can enjoy more styles soon after. As a consumer, Ninkasi really pulled me in by referencing Slayer in this beer. I just really hope that someone there at the brewery is a metal head. I know one other beer from them has an Iron Maiden reference, Maiden the Shade, which used to use the iconic font similar to the band’s logo. I hope to get Sleigh’r each year so I can enjoy one of these in our beloved Texas Winter. 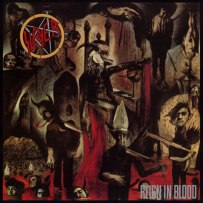 Metal Connection: God damn right I went with Slayer on this pairing. Slayer has many iconic songs that could have fit perfect here, but I am a sucker for a good Metal album with an opening track that kicks you right in the fucking face as soon as the first note is played. I was originally going to go with “War Ensemble” from the band’s 1990 full length album, Seasons in the Abyss, as I love how that song starts off, but I went ahead and chose a song that really says “Slayer.” I am talking about “Angel of Death” from their 1986 full length album, Reign in Blood. This album is chock full of Evil hits with every song being memorable and recognized throughout the world.  Yes, the band has a love/hate relationship with metal heads around the world cause of certain actions taken by the band, and of course, the loss of guitar great, Jeff Hanneman. They are still touring and putting out albums, despite some people turning their backs on the band. I for one, have always been a fan, and I will remain a Slayer fan, but I do listen to the older material a lot more than recent stuff.