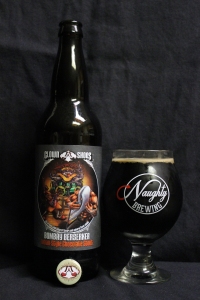 Clown Shoes, the beer company with the wacky labels that resemble Metal album covers for the most part. Gotta love these guys for their creativity on their names, and labels. Oh yea, and the beer inside these bottles are fucking awesome as well. Here we have an exotic Stout that is a relative to the brand’s Chocolate Sombrero which was an Imperial Stout with Mexican spices. Clown Shoes replaced the Mexican spices with flavors of Chai tea for Bombay Berserker . When I first gazed upon this beer at the local craft beer store, I had to purchase it, regardless of what what inside. Yes, I sold out to the artwork. I am glad I did though, as this beer had everything promised and was able to back up such brutal artwork.

Using my friend, James Vaello’s Naughty Brewing snifter glass this time, Bombay Berserker poured a deep opaque motor oil looking black color. It was topped with a thin layer of khaki colored bubbles, which did not stick around very long, leaving no traces down the glass.

For my senses, the aroma of chocolate hits my nose first, followed by added ingredients of cinnamon, and vanilla. I get a faint aroma of cardamon, a bit woody. There is a good boozy burn in the nose. Spicy and peppery. Good scents of roasted malts, and a bit of a coffee aroma, as well.

The taste has all the same characteristics, just like the aroma. The added ingredients of cinnamon, and vanilla are pretty strong. As with most Clown Shoes beers, the presence of a high ABV is noticeable, good strong boozy taste. The bulk of the body, and aftertaste is that of chocolate. There is a good mix of the cardamon in there as well, giving this beer a woody taste. This beer has similar qualities to that of a good barrel-aged beer.

The body was heavy and thick, and had a mouthfeel that was creamy, silky, mixed with some spice kick. Mild carbonation. Bombay berserker had a finish that was a bit hot and boozy, and had a roasty end.

Of course, the label is what won me over on this beer. First glance, I knew I was going to buy it, regardless of the beer inside the bottle. Lucky for me, the beer inside matched the sheer brutality of the cartoon Metal band drawn on the label. I am a big fan of Clown Shoes beer, and many more will grace the site from, time to time. This beer is no longer in production, so if you find this bottle still around, it is definitely aged a bit, but this beer should hold up nicely over time. I had actually drank this bottle earlier in the year, and it almost did not make the site, but lucky for me, I found a file containing my old notes. Seeing as this site is all about Craft Beer and Metal, I was not going to let this one slip by! Happy hunting, if you are still searching for this one.

Metal Connection: Once I saw the artwork for Bombay Berserker, only one band came to mind, and that was Cannibal Corpse. When I saw the lead singer of the drawn band with his menacing singing stance and hair draped down over his face, I couldn’t help but to compare him to George “Corpsegrinder” Fisher. I know Fish er is not a muscle headed freak, but he is pretty big bodied, and he has a neck the size of a tank cannon. After searching through the many music videos by Cannibal Corpse, I finally settled on “Priests of Sodom” from the band’s 11th studio full length album, Evisceration Plague from 2009. I mean, just pull up the video and minimize the screen right next to another window showing the beer’s wicked label, and you will see the similarities from the live performance part of the music video.