2014 marked a milestone for Avery Brewing Company in Boulder, Colorado, they turned 21! Not only that, they also broke ground on their long planned Taj Mahal, their new brewery, tap room, and restaurant. This is the last anniversary beer that was made at their current facility. Very happy for these guys!

I have loved a lot of the beers by Avery from their year round beers to their Demons of Ale series and everything in between. Seeing this new anniversary ale on the store shelf was a nice treat.

Seeing at this beer is listed as an Imperial/Double Brown Ale, I used the appropriate glassware, a snifter. This one is from Craft Pride in Austin, TX. This beer poured a hazy reddish brown color topped with a half inch eggshell  colored head. Great head retention on this one, with web-like lacing left down the glass.

Right up front I pick up earthy, grassy hops in the nose. The uniqueness of this beer is that the brown ale malts shine through the initial barrier of hops. This one is sweet dough-like, nutty, a little chocolate, toffee, toasted bread, some earthiness, a little wood, brown sugar/molasses, and strong with the caramel. This anniversary ale has a nice burn in the nose from the high alcohol presence. There was a good mixture and balance of the hops and the malts.

Very good complexity on the taste. Wet grass, earthy hops again hit the palate first. There is a trace of some citrus zest that I did not pick up in the nose. The malts cut right through, soon after. So I was hit with a mouthfull of toasted bread, a little woodiness, toffee, some chocolate notes, and again, a bit hit of caramel.  There is a nice hint of brown sugar/molasses sweetness that also peaks its head in there as well. The higher ABV on this bad boy shows up, and leaves a good heat. I am pleased with the balance of hops and malts in the taste of this beer. The lingering aftertaste is a great mixture of grassy hops, caramel, and wood.

I find the body to be middle of the line, medium in thickness, not too heavy. Good carbonation, great bitter dryness on the finish.

I have to say that this beer was simply fuckin’ awesome! I really enjoyed the balance of all these components in this guy. Hoppy, yet malty, and definitely Imperial or double. Good job on getting me buzzed. haha! I look forward to seeing what this year’s anniversary beer will be, and other offerings from this amazing brewery. One day, I really do hope to get out to Colorado to visit some of the breweries there, especially Avery. 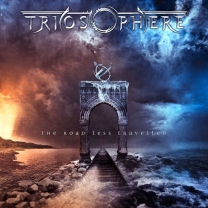 Metal Connection: As much as I love to discover new breweries and beers, I also love to discover new bands, and their entire discography. I am a huge fan of most styles of Metal, and that includes Power Metal. I recently found this amazing female fronted Power/Progressive Metal band from Norway called Triosphere. Vocalist/Bassist, Ida Haukland has such a powerful, and amazing voice. She is also a good bassist, as you can really hear her instrument in the mix of this song. Here is their song “Twenty One” from their second full length album, The Road Less Travelled,which was released in 2010. They are still active, and put out an album which was released in the end of 2014. Do yourself a favor, and pick up all three of this band’s albums. They are all very good. This is definitely an under rated band, way under the radar of Metal fans.

One thought on “Beer Review: Avery Brewing Company Twenty One”