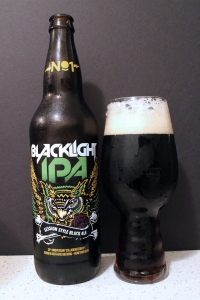 I remember seeing this awesome artwork, as the image of this beer was sent to me by my good friend Jorge Espinoza of animebeers.com. Since we do a lot of trading between us, Jorge ended up sending me a bottle of this beer. Little did we know that this bottle was soon to be available to me in my market. I even served this beer on tap at my previous job at Big Hops. Oh well, so I got it a bit before others, no big deal. Thanks Jorge for the sweet hook up. So, in other words, this beer was actually downed many months ago, but since I am still playing catch up on my reviews, I decided to put it up anyway. I still see people checking into this beer, so I’m assuming this beer is still making it’s rounds in some parts. Not sure of this was brewed more than once or not. I don’t see anything that is no longer in production, so my guess is that this beer is still being brewed. One thing I also noticed is that Widmer is already on collaboration #4. I never saw #2 or #3 at my local stores. Unless, I over looked them or something. I guess getting Blacklight sent to me wasn’t so bad, after all. You just never know when that one beer isn’t coming to your city.

This beer called for a specialty glass, a glass designed strictly for IPAs. Blacklight poured a semi-hazy damn near black color. The beer shines a deep, dark brown when held up to the light, but upon a quick gaze, this beer is black as midnight. My pour was crowned with about a 1.5 inch eggshell colored foamy head. Good head retention, as it stayed around for most of the session, and leaving an excellent sheet of lacing down the glass.

Grapefruit, citrus, grassy, piney, and a hint of danky hops are all accounted for here in the aroma. There is a nice blend of hops, for sure. Behind the hops is a blend of roasted malts, caramel, toffee, a little brown sugar, and a nice woody smell.

The taste follows the aroma. The hops hit the palate first with grapefruit, citrus, grass, pine, and some resinous dank. Again, the mixture of malts is greatly rounding out this beer. There are some flavors of roasted malts, caramel, toffee, brown sugar/molasses, and a flavor of wood. Now, one thing I forgot to mention in the intro, is that I am not really a fan of the Session Style IPAs. I just don’t get it. I love these flavors so much, but beinga  session beer at only 4.2%, thee is an overall muted quality to this beer. Best way for me to describe it is like if they took a normal IPA with all of these aromas and flavors present and diluted it with a lot of water. So, yes these flavors are all present, but they are not over powering or very strong.

The body is strangely thin,as again this is a Session IPA. The mouthfeel is also light an thin with a slightly creamy feeling, and good carbonation. There is a nice dry finish, though that I find satisfying. As with most Session IPAs, the light, thin body is something I have to get used to.

Overall, I must say that I did not love this beer, nor hate this beer, but rather I liked this beer. It was tolerable. The normal Session IPA is hard for me to really get into, but since this was a Black IPA, it was a bit easier for me. I really enjoy a good Black IPA due to the roasted dark malt aroma/flavor and dry finish that normally comes with this style. This beer did have those qualities, just a muted version, so in that aspect, I did like this beer.

Metal Connection: I knew I wanted something trippy, psychedelic, maybe something in the Stoner Doom genre for this Metal Connection. To my delight, I ran across a band named Snail from Seattle, Washington. This is my first encounter with this band, and I am happy to have found them. Here I am displaying their song that appropriately titles, “Blacklight.” This song comes to us from the band’s second full length album, Blood, which was released in 2009 on MeteorCity Records. The sound that this band produces is awesome, so retro sounding. Now, I am not a pot smoker, and I never have been. Beer has always been my vice, but that doesn’t mean I can not enjoy a good Stoner Rock/Doom song all about smoking pot. Here is a small part of the lyrics to this song, just to give you an idea….

Out of the woods, cold, stay a year
Grow yourself out and make a smile
Smoke can take us out of here
So take the herb and fill the pipe