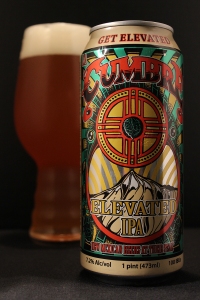 I believe that I really need no introduction to this beer. La Cumbre Brewing Company from New Mexico has been on everyone’s beer map, since the hype around their #1 beer, Elevated IPA hit the market. The rating of this beer is always high, and usually receiving the highest mark from various sources. I of course, gave this beer my highest rating as well. Jumping on the bandwagon? Nah, this beer is just that fucking good! I am a grateful mother fucker for having such amazing friends in the beer community who were able to get this beer to me on a few occasions.

I really like the can design for this beer. The look of this can just screams to me “I AM A FUCKIN’ AMAZING IPA! DRINK ME NOW!” There is a great color scheme of green and yellow on this sunburst background. They use the same circles on their cans for other beers, which feature a similar design like their state flag with the second, larger circle featuring a mountain top. I mean, La Cumbre does mean top, or peak, after all. The base of the can is a light khaki color so the whole image really pops on this can. Hop cones care present throughout the image. The La Cumbre logo, to me, really looks like a logo for a Stoner/Doom Metal band. In fact, this whole beer can could pass for a Stoner/Doom Metal album cover. Great representation for a top notch IPA.

Poured from a 16 oz. can into an appropriate IPA glass, Elevated IPA was a good looking thick, hazy bright orange color. The beer was topped with a thick 1 inch white foamy head. There was good head retention throughout this session, which soapy lines and spots were left along the glass.

The nose was exactly what I expected after gazing at the beauty of this beer; it was all hops. Beautiful, sexy, juicy hops. Oh, sorry…back to being focused here. Right away my nose was hit by citrus orange, lemon zest, grapefruit, combined with wet grass, a floral scent, and a fair amount of some sticky dank. All the characteristics of all the good hop profiles were present. Not only hops, I can also pick up on some pale malts and grains, and some fresh baked biscuits, maybe even some crackers.

The taste of this beer matches the nose perfectly. My palate is hit with the hop bombs right away. Again, all the different hop profiles are present in the taste with citrus orange, lemon zest, grapefruit, wet grass, floral, and a dank resinous character. The combination is so awesome. After the hops, there is a good grain and malt body. Very mild caramel, cereal grains, and pale malts peek through the garden of hops, followed by some bread characteristics of biscuits and crackers. There is even a small hint of cracked black pepper in there, as well. The hops do make a comeback at the end, and linger a bit in the aftertaste. Nice mouth full of citrus fruit hops at the end.

Elevated IPA has a good medium thickness to it, complimented by a rich creamy, slick mouthfeel. This one definitely has a good bitter bite, good carbonation, and finishes crisp and dry.

Overall, this beer met all my expectations after all the hype I had heard about it. I was very pleased about getting my hands on this beer on more than one occasion, as mentioned earlier. I look forward to my next encounter with this hopped up beast. It is obvious that America has fallen in love with the India Pale Ale, as most of the craft breweries around the country has at least one IPA in their portfolio of beers, and are emphasized in their marketing. When breweries such as La Cumbre release a beer like this, which wins gold medals at the Great American Beer Festival, there is no wonder that a lot of us are in love with IPA’s. This beer has an overall great package, starting from the can design all the way to the very hoppy  aftertaste.

Metal Connection: This Metal Connection works on so many levels. First of all, the band name is Weekend Nachos, a time and food item that I have come to highly enjoy after a good weekend night of drinking. Have to love those local taco trucks that are open all night long. Secondly, this great Powerviolence/Sludge Metal band released this song called “Elevated Tracks” on their 2009 full length album, Unforgivable. Song title matches the beer name, as I try to find most of the time. Weekend Nachos come to us from Chicago, and have been kicking in the Metal scene since 2004, releasing 4 full length albums, and a slew of EPs, and splits. They have played some of the best Metal fests around the world and been a part of some excellent tours. Enjoy this happy little number.

This world is my enemy, I have no friends
I’m waiting for the day when it comes to an end