Before my buddy Danny, owner of Doc’s Liquor in San Antonio brought in some killer stuff from other states for us Craft Beer drinkers around town, I had never heard of Tractor Brewing Company. I am glad I was introduced to this brewery. So far I have had the pleasure of having a few of their year round choices.

The can craze continues, as I have seen online that this beer was previously released in 12 oz. bottles with a complete different label. I am happy with the change, actually. The old label was not so appealing. Those eyes on this girl on the can are attractive and they lured me in when I saw that can on the shelf at the store. The shades of red used on the can also represents the style of beer perfectly.

The smell was typical for an amber/red ale. It had a subtle light caramel malt aroma that was the most dominant. There was a slight floral hop presence, along with a bready yeast profile. The overall aroma was not very strong, but indeed, the right characters were there.

The flavor was on point with the aroma of this beer. The taste combines caramel malt, white bread, and light floral hops similar to the nose. The caramel is dominant in the taste with the bready character showing up in the body of the drink, while the light floral hops barely show up towards the end. The caramel taste stays throughout the drink and lingers in the aftertaste.

The body is a light medium thickness, but I was expecting this to be a bit thicker. The mouthfeel was pretty smooth and creamy with a mild carbonation bite. The finish was slick, but thin.

This was a typical red ale, and not much else went into this beer. Is this a bad thing? No, not really. I personally enjoy a good red ale every now and then. As usual, I would love to try this beer again from a different batch. You know, give it a second chance. This one was missing something, missing some depth, and substance, but still a good beer. I did enjoy this one. Hopefully I can do another one to compare. 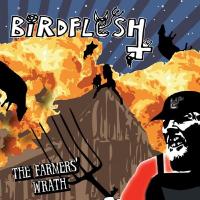 Metal Connection: I knew in the realm of Grindcore that I was not going to have a hard time finding a good Metal Connection for Farmer’s Tan Red Ale. I was right, and I didn’t have to look that far. Birdflesh, a Swedish Grindcore band who is no stranger to the masses of underground Metal fans put out a killer full length album in 2008 called The Farmer’s Wrath. This was the band’s 4th full length studio album since their inception in 1992. Within each of these albums they released a shit load of demos, EP’s, and splits. I went with their ode to Grindcore, an anthem of sorts, called “The Triumph of Grind.” This songs clocks in at 1:32, and is about the united forces of the Grindcore scene and fans. So grab yourself a good red ale, and sing along with this tune.