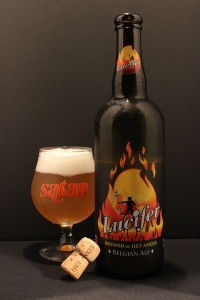 Hard to believe, but I find it damn near impossible to have friends who are both into Metal and Craft Beer. For some reason, most of think that Craft Beer is wimpy, sissy, and strictly for hipsters. I bring this up, cause one day out of the blue my friend Kevin Alter from Minnesota, who plays in an awesome Death Metal band named Invidiosus  hit me up on Facebook, asking me if I wanted to do a beer trade. I was stoked, cause up to that point I was only doing trades with my Cali friend, and fellow Craft Beer blogger, Jorge Espinoza (Animebeers.com). I was pleasantly surprised with the box once I received it from Kevin. We didn’t trade for anything specific, but rather beers from our respected states that we each can not find locally. Even though this particular beer isn’t a beer local to his area, it is not sold here in San Antonio, TX, so I was very happy to have received this Belgian masterpiece named Lucifer. (Check out a song by Invidiosus here.)

Lucifer, the beer, was first introduced back in thew 1980’s by Brouwerij Riva S.A. In 2009, Brouwerij Het Anker obtained the right to brew and sell Lucifer. The Hell fire label on this bottle is an excellent representation of the beer name. The silhouette of the devil stands tall within the fire, complete with a flowing red cape, large horns on his head, a pointed tail, and holding a pitchfork of sorts, which is oddly, a boat anchor (?) The font used for the name Lucifer is plain, and drapes across the label. The overall look of this bottle is very retro.  I imagine this being on a late 60’s, 70’s Rock album, or of course, today’s retro Doom/Stoner genre. I am very happy to have this bottle in my collection.

So, why the Hell not I thought, I used my Satan Red snifter glass for this session. Appropriate glassware, I think. I would have liked to have used a tulip style glass, but come on, this glass says Satan on it. It fits perfect for this beer named Lucifer. The beer poured a hazy golden color crowned with a large 1 inch white foamy head, which did moderately lessen down to a nice thin layer atop the beer. There was excellent large soapy patterns of lacing down the sides of the glass.

The aroma was everything expected from this Belgian Strong Pale Ale. There was a big bold fruit smell right up front with traces of apples, grapes, lemon peel, strawberry, and ripe bananas. There was a light black pepper aroma, along with clove. There was a subtle hint of grassy hops, and some bready malts in there as well. The fruit aromas stuck around in the nose following each whiff.

The taste was a lot like the aroma. The Belgian characters were all present and accounted for. Good amount of fruit flavors hit the palate, like green apples, grapes, lemon peel, strawberry, and ripe banana. Just like in the aroma, there is a nice black pepper and clove spiciness that mixes well with the fruit flavors. Underneath it all are hints of grassy hops and bready malts. The lingering aftertaste is more ripe banana and clove, more than anything but the other fruit flavors do show up behind these defined flavors.

The body is a nice medium thickness. This beer has a mouthfeel that is creamy yet effervescent, with strong carbonation. The finish is dry, with a little heat from the booze.

Overall, I was very impressed by this beer. I am usually very nervous when drinking a beer like this. I already want to love the beer based on the name, and label alone, but I know I have to be fair and really review all the aspects of the beer. I am happy to be not be disappointed. Seriously though, I can see how most of my Metal friends could be misled by my review of this beer. I mean, I list fruit flavors and aromas, spices, you know shit that will normally be classified as sissy by them, I guess. Remember this though, even though I saw I can pick up hints of, let’s say, strawberry in this beer, it is NOT brewed with actual strawberries. The combination of smells, and flavors given off by the ingredients make up this sweet characteristic, which just reminds me of the fruit. I say give it a try, dammit! Put down your Lone Star or PBR tallboy can and drink a good Belgian beer like Lucifer. 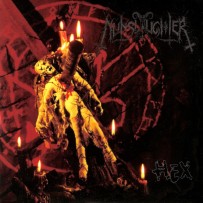 Metal Connection: In the recent days, the Metal community lost a true warrior, and from all the comments I have read, one of the nicest, funniest, and coolest dudes on the planet, Jim Sadist (Real Name Jim Konya). In his career, he played in many bands like Derkéta, The Spawn of Satan, Schnauzer, Gravewürm, and Nunslaughter, which is the band I chose to use for this Metal Connection. To be honest, I thought it would be a difficult task to find the right song to fit with a beer named Lucifer. I mean, there are 1 billion choices out there that I could have used. I took this to Facebook, and posted up about this task, and a few of my friends suggested the song “Lucifer” by Nunslaughter. I am a fan of this band, and have recordings by them dating back to 1993, with their The Guts of Christ demo. They did record the song “Lucifer” back in 1995 for their Face of Evil demo, but the version I chose for this is more recent, from their 2007 full length album, Hex. I never had the chance to meet Jim Sadist, but I am honoring his memory here on BeerMetalDude.com as a fan of his work, and brother by Metal. R.I.P. Jim Konya