Two of US powerhouse brewing companies, Stone Brewing Company (CA), and Smuttynose Brewing Company (NH) got together and collaborated on a special release beer known as Cluster’s Last Stand. This beer was made in only 30 barrels (930 gallons). This one time special brewing process had Stone’s founder, Greg Koch in New Hampshire to help the brewers at Smuttynose. This isn’t just a regular new IPA, bu rather a recreation of the post-Prohibition Ballantine IPA. The original Ballantine IPA first was brewed in 1878, and the recipe remained true to form past the Prohibition era. These breweries resurrected this beer with Cluster’s Last Stand.

The label depicts a character similar to Colonel Custer riding a horse, waiving vines of hops, leading a group of soldiers into battle. As history tells us, the Battle of the Little Bighorn has been dubbed “Custer’s Last Stand.” Custer and his army were defeated and killed in this American Indian War which was against a coalition of Native American tribes. I believe, the name of this beer signifies the last ride for this “Ballantine IPA,” and the name Custer was replaced by Cluster, a hop variety used in this beer. There is an excellent font used as well on here, which gives the label a very old Civil War era feel to it.

As this is an IPA, I used my Spiegelau IPA glass for this session. Cluster’s Last Stand poured a clear, bright golden orange color. The initial pour gave this beer a large almost 2 inch white foamy head. Great head retention as it stayed around a while, leaving excellent spots of stickiness down the glass.

The aroma was tons of hops right up front. Crisp, wet grass, floral greenery, and lots of citrus flavor, grapefruit and orange peel. Good amount of booze in the nose. Behind the hops are traces of white bread, saltine crackers. Great blended nose on this beer.

The hops hit the palate first with a bouquet of wet grass, floral greenery, citrus, orange and grapefruit peel, and tons of actual grapefruit. Malts and yeast characters make up the backbone with flavor of white bread, or saltine crackers. Great heat from the booze. There is a lingering taste of grapefruit and crackers.

The body had a good medium thickness with a mouthfeel that was slick, and oily and a crisp, and fizzy astringent finish. As stated before, there is good heat from the booze on this one.

Overall, this was a very impressive beer made by two giant power houses in the Craft Beer world. I wonder if this beer will be released again. If so, do yourself a favor and pick it up. Of course if thee are still bottles floating around, it may have lost some of it’s zing by now, so be warned. Check the date on the bottle. But you already knew all that! 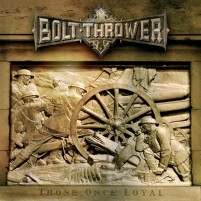 Metal Connection: Ah yes, the Metal Connection section of this review. This was a fun one, cause I had already known which band to turn to, a band known for their war, battle, soldier, brotherhood lyrical themes. I am talking about the all mighty Bolt Thrower from England. Bolt Thrower has been together since 1986, and since then they have released 8 full length albums, including their iconic debut album, In Battle there is no Law. from 1988, making them one of the pioneers to the Grindcore/Death Metal music scene. Members, Gavin Ward (Guitar), Barry Thomson (Guitar), Karl Willets (Vocals), and the first lady of Grindcore, Jo Bench (Bass) have all been part of this band since, at least 1987. What a stable line-up to be together for such a long time. Their drummer position had gone through a few people, and Karl Willets took a few years away from the group, leading to other influential Death Metal vocalists to take the mic, including Dave Ingram (ex-Benediction, and more…) and Martin Van Drunen (Hail of Bullets, ex-Pestilence, and more…).

The song chosen for this Metal Connection is called “Last Stand for Humanity” from the band’s last studio album, Those Once Loyal, which was released in 2005. The band is still currently active despite this fact. This song has  all the elements that made Bolt Thrower a household name in the Underground Metal scene, groove, heavy ass riffs, killer, yet easy vocal patterns, punishing brutal drums, and a production sound that is unique to Bolt Thrower.