Last year, I saw my friend Jorge Espinoza (animebeers.com) post reviews of three beers that were themed around The Hobbit movies, I knew I had to get my hands on these bottles. At the time, these bottles were not available here in TX, so I had my friend send me these bottles in trade, only to find out later that these beers became shelf sitters here in San Antonio only months later. Oh well, at least I got them,

I have been a huge fan of filmmaker, Peter Jackson for quite some time now, going back to his underground gore-soaked first film, Bad Taste, and Meet the Feebles, a sex, drugs, and rock ‘n roll Muppet show. Oh, and who can forget my personal favorite, The Frighteners. Who would have thought that years later, Peter Jackson would go on to produce the mega movies of the Lord of the Rings Trilogy, and The Hobbit Trilogy. It’s crazy how this shit can happen.

Each beer name and label are based around certain characters from The Hobbit movies, Bolg, an Orc leader, Smaug, the great fire drake, or fire breathing dragon, and Gollum, everyone’s favorite creature from the films. 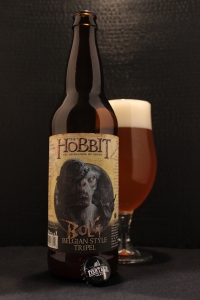 As I love Belgian Tripels, I was happy to have had this one first of the three beers in this series. I poured this beer into a tulip style glass. The beer’s appearance was a cloudy bright orange/copper color topped with a large 1.5 inch white fluffy head. Great retention, and large spots of sticky lacing down the glass.
The aroma was typical Belgian with hints of banana, floral, spices like clove and peppercorns, fruit like apricots, papaya, orange, and lemon mixed with sweet sugary candy, and fresh white bread loaf.
The taste had notes of banana, apricots, papaya, orange, lemon, peppercorns, clove, floral, sweet sugar candy.
The body was was a bit thin for my personal liking to Belgian Tripels, and had a mouthfeel that was a bit over carbonated, effervescent, with a dry finish.
Overall, I was really wanting this to be more, but due to the thin body and the way too fizzy mouthfeel, I was not too impressed, and ended up liking this one the least of the three beers.

Poured into an American Pokal style glass, Smaug Stout’s appearance was thick, opaque, black topped with a 3/4 of an inch dark khaki colored head. The head moderately thinned down, while leaving small lines of lacing down the glass.
The aroma was dark chocolate, a hint of roasted coffee, some mild habanero peppers, some smoke, earthiness, brown sugar, molasses, caramel, dark fruits like raisins and dates. There is a nice peppery spice residue left in nose after each whiff, mixed with caramel and sugary sweetness.
The taste has all the same characters as the nose. There is dark chocolate up front followed closely by the dark fruit taste of raisins and dates. The body consists of sweet brown sugar/molasses, caramel, smokiness, roasted coffee, earthiness, and a nice subtly hint of habanero peppers, which is no way overpowering. The aftertaste has a mild pepper burn, with hints of dark chocolate, and sweet brown sugar.
Smaug Stout has a nice medium-full body with a warm, velvet-like mouthfeel, with moderate carbonation. The finish was a tad bit dry, working well with the pepper and sweet chocolate aftertaste.
Overall, I was a bit nervous going into this beer, as I am with most pepper beers. I am not a huge fan of hot, spicy beers. Luckily the habanero peppers here were pretty subtle and not so dominant, making this beer a rather easy drinking stout. I like how they used the peppers to represent the fire breathing dragon, Smaug, though. Good job on that.

The last one I had in the series was the Gollum Precious Pils. I knew I would like this one, as you really have to be a bad brewer to mess up a Pilsner. I had faith in Fish Brewing Company after having the other two beers in the Hobbit Series.
Served in a Pilsener glass, Gollum Precious Pils poured a hazy golden orange color topped with a full inch white foamy head. There was great retention, leaving excellent lines of lacing down the glass.
The aroma was light and not very powerful. There was a nice aroma of floral, and herbal hops, honey, light caramel, a little sweet sugar, coriander, typical pilsner malt, and fruits like tangerine, and apricots.
The flavors picked up in this beer were honey, citrus, stone fruit like apricot, biscuit bread, typical pilsner malt, coriander, some sweet sugar, and light caramel. The taste reminds me of an apricot flavored rock candy.
This beer has a medium body, with a smooth, soft mouthfeel, with moderate carbonation. The finish is slick and mouth coating.
Overall, I will say that Gollum Precious Pils is a fine example of the style. I love the sweetness of this beer. It is definitely an easy drinking beer despite it’s 9% ABV.

Metal Connection: This was an obvious choice for this Metal Connection. I present to you the German Power Metal band, Blind Guardian. These guys have been kicking around the Metal scene since 1986, and are still currently active, putting out awesome powerful albums. In 1992, the band released Somewhere Far Beyond, which featured songs of fantasy, epic tales, and Tolkien literature. This song is called “The Bard’s Song – The Hobbit,” which, of course is a god damned perfect fit for this beer review, as these beers are part of the Hobbit Series. So, if you are still holding on to these beers, crack them open, and turn up the speakers, and jam this epic tune, while enjoying these beers.