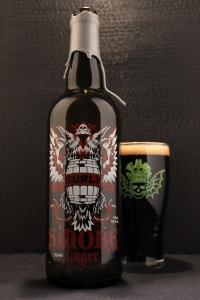 As I have said before, I really do love my friends in the Metal world, and in the Craft Beer world alike. I do have some friends who are members of both circles, like my friend Kevin Alter from Minnesota, who plays in an awesome Death Metal band named Invidiosus. This beer is one of the few beers I received from Kevin in a trade we did a while back. I was so fuckin stoked to have received this beer, as I am a huge fan of Surly Brewing, one of the world’s most Metal brewing companies. I really hope that one day I will get to visit this brewery in person. For now, I will just rely on some good friends sending me their beers, as they do not have distribution here in Texas yet. Cheers to Kevin, once again, for sending me such awesome beer. Please check out his band at the link above.

I didn’t expect nothing less from Surly when it comes to their label artwork for their beers, and with Smoke Lager, there is no exception. The label is printed right on the bottle, which I have always liked more than paper labels. They look so much better, and there is no risk of the label peeling or getting all wrinkled up or anything. The label features a drawn crest-like piece that is made up of two large birds, possibly eagles in a spread eagle position with the faces looking outwards. The birds bellies are covered by a large oak barrel, with the brewery logo draped across the front. There is a skull-like crown right above the birds heads. The words “Smoke Lager” is written on the bottom the drawing, and it’s written in a medieval font, really adding to the shield crest feeling of this bottle.

Since the BeerMetal flows through the two of them equally, I used a 3 Floyds Brewing Company pub style glass. I mean, I think both breweries share the same bloodline, so why the Hell not? Surly Smoke Lager poured a very dark brown that was damn near black in color. Very thick, opaque appearance that was topped with a dark tan 1/2 of an inch foamy head. The head stuck around as a thin layer atop the beer for most of the session, which left lines of sticky lacing down the glass.

The nose had an expected character like big smokey aroma, maybe smoked meat, or wood, or even just liquid smoke. Either way, smoke was the big dominant aroma here. There were traces of tobacco, oak wood, brown sugar/molasses, char, dark fruit like raisins, some caramel and chocolate peek through as well. The lingering aroma that stays in the nose after each whiff is a mixture of smoke, sugar, and a mild chocolate.

The taste follows the nose with the smoke being a dominant flavor, but just to let you know, it is the first flavor, and yes, it is dominant over the other flavors, but it’s not too powerful or off putting. It is a perfect amount to help make this beer pretty enjoyable. Again, the smoke flavor reminds me of BBQ with the mixture of smoked wood, meat, and liquid smoke. Flavors of char, tobacco, wood, brown sugar/molasses, and raisins make up the bulk of the body, with hints of caramel and chocolate blending in, giving this beer an excellent mixture. The aftertaste is mostly smoke, mixed with a bit of sweet sugar, and a hint of chocolate.

This beer has a medium-heavy body with a mouthfeel that is rich, smooth, and creamy. There is moderate carbonation, giving this a bit of a fizzy feel, but not much. The finish is sticky, sweet, and dry.

Overall, I thought this beer was damn near perfect. I am usually not a huge fan of smokey beers, so it did take me a few drinks to warm up to this flavor. I love me some BBQ, but real meat. I was always put off by the idea of smoked meat flavor in a beer, but over time I have tried so many smokey beers, that I have now grown to like them a bit. If this one would have been my first one, I probably would have liked them a lot earlier. This is a great example of what a Smoked beer should taste like. It’s not overpowering, or completely full of smoke like others I have had. Way to go Surly, yet again!

Metal Connection: I have used this band before on my site, as I am a fan of the California Thrashers, Hirax. They are a band who have been kicking it in the Metal scene since 1984. They disbanded in 1989, to reform a few years later in 2000, and still kicking it strong to this day. I am very proud to have been a promoter a few years ago, as in the many years that Hirax has been together, they never once played in San Antonio until the day I booked them on my final show back in 2011. I will never forget that! As for the Metal Connection, the band released an album called Immortal Legacy in 2014, which featured a really fitting song title, “Black Smoke.” I figured a name like this really represents the beer perfectly. One thing Hirax never did was slow down. This is obvious in this tune. Speed/Thrash Metal is what they play. You also gotta love Katon De Pena’s vocals. He is one hell of a front man. Enjoy some fuckin Speed Metal!