There comes a time in every person’s life when they realize how grateful they are for their friends. That time for me happens every single time I pop open a bottle of good beer that is from out of the Texas market. Earlier this year I was sent this beer from my good buddy in Cali, Jorge Espinoza who does his own awesome beer review website at animebeers.com. Please check it out when you have the chance. When this beer was sent to me, Stillwater Artisanal Ales were not available in TX, but since then the brewery gained approval for sale in the great state I live in. I am very happy about this, as I have loved the Stillwater beers I have had so far. Check out a review for their beer, As Follows.

Stillwater has a series called the Remix Project, where they take a beer by another brewery in collaboration, and add their own twist to the beer. Omnipollo made a Double IPA named Nebuchadnezzar, and that is the base of this Babylonian Style Ale. Stillwater took this beer and added farmhouse yeast and Brettanomyces to funk up this beer. They did a great job with this project, and I am very pleased to have received this beer.

One of the main reasons I wanted this beer was due to the label, as I thought it would make a fine addition to my collection. My take on the label art is that is depicts Nebuchadnezzar, an ancient Babylonian god. During his reign, he had lost his mind and lived among the animals in the wild for several years before being restored to his normal self. The label features a face with glowing red eyes, long mangy looking facial hair, and long flowing uncut and wild hair that wraps around the label several times. I love the insanity of this art piece. It definitely reminds me of insanity, or even an Evil force.

Poured into a munique tulip glass, this beer’s appearance was a hazy light golden yellow color that was topped with a huge 2 inch white bubbly head, which dwindled down to a thin layer atop the beer, but stuck around for quite some time leaving excellent lacing down the glass.

The aroma was a great mix of hops, farmhouse, and sour funk. Nice aroma of floral, grassy, lemony, citrus hops that was blended well with the scent of barnyard hay, and farmhouse funk. The brettanomyces added a great sour funkiness to this aroma, but it was not overpowering, leaving all the other smells in the forefront. More notes of peach, papaya, mango, apricot, honey, herbs, peppercorns, biscuit bread, and flowers all peek through, giving this beer a real complex overall aroma.

The taste has the same mixture of characters as the nose. There is a sour funky flavor that covers the overall taste of this beer caused by the brettanomyces. Behind the funk, shines a bouquet of hop characters like citrus, lemon, floral, wet grass, tropical fruit like papaya, and mango. Barnyard straw, barrels of hay, honey, herbs, peppercorns, and biscuit bread make up the body of each swill. There are other characters like peach, and apricot that show up towards the end, and linger a bit in the aftertaste mixed with the funk from the brett.

This beer has a light-medium sized body, with a fizzy, mildly carbonated, astringent, and a little smooth mouthfeel, with a dry finish.

Overall, this was a fantastic beer, and a great experiment by Stillwater. It’s great to see breweries like Omnipollo contributing to this Remix Series. I really enjoyed the great mix of hops, farmhouse, and brett in this Babylonian Ale. 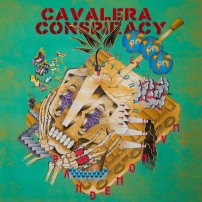 Metal Connection: in 2007, something amazing happened in the Metal world. brothers, Max and Igor Cavalera, starting jamming together again after 10 years. This duo were the meat and potatoes behind Sepultura’s most awesome albums, like, Morbid Visions, Schizophrenia, Beneath the Remains, and Arise. Yes, there were two other albums with the brothers on it like Chaos A.D. and Roots, but personally speaking, I don’t think they fit into the same category as the band’s first 4 full length albums. In 2007, the bothers gave us Cavalera Conspiracy, a new Groove/Thrash/Death Metal band that is both modern and old school reminiscent of the Arise and Chaos A.D. era of Sepultura. It is very nice to have these brothers back at it again. Igor Cavalera is one of my favorite drummers. He is very clean at his playing. Yes, I know studios polish the shit out of things for the albums, but I have seen him play live a few times, and he doesn’t skip a beat in the live setting. One brutal mother fucker! Here is the song “Babylonian Pandemonium” from the band’s 2014 full length album, Pandemonium. This song has a perfect fitting title, and the song is equally as heavy as this beer is great in aroma and taste. Enjoy, you fuckers!