Here is one from the archives of notes. I recently found an old file I had saved on my old computer which contained a high number of beer review notes that never made it up to the site at the time. Well, I decided to post up a few, as they are still active beers. Sure, a few things maybe different, like labels on the bottles and such but, fuck it! Here it goes…

I had the privilege to friend some like minds over the past few years since starting this website. Some of those friendships are due to Adem Tepedelen of Decibel Magazine, who wrote The Brewtal Truth Guide to Extreme Beers, who put out an post on Decibel Magazine’s site about other beer and metal related sites. One person who befriended me is Will Cook, who at the time worked at Port City Brewing Company, but now brews over at Fair Winds Brewing Company. I recently spoke to Will to catch up, and he informed me that he hosts Metal Nights at the brewery, where he has made small batch beers for the Metal bands playing. Here is a flyer for one of these events [Flyer] . This is fucking awesome, and how things should be at breweries!  In another part of our conversation, he told me that he confirmed with Star Hill Brewing that the Snow Blind beer was actually named in tribute to the band, Black Sabbath, for their song by the same name.

After finding out the fact that this beer was named in tribute to Black Sabbath, it made sense to me that the label for this cover would look

like a Heavy Metal album cover. Starr Hill Brewery used the perfect colors to represent this beer on this label. It is all in white, blue, and a small amount of green. In fact, the label looks like a close up of an eyeball, with the pupil being the green part with the brewery’s signature star logo overlaying it. The part which would be the iris is in blue with lines and shapes of white throughout that part, like lightning coming off the circle star in the middle. Surrounding the blue looks like a vortex of a white blurry snow storm. In my opinion, if this beer was in fact, a tribute to the masters of Heavy Metal and their ode to cocaine, this label does a mighty fine job of representing that fact! The bottle I drank has a stamp date of 11/06/14, and even though Starr Hill Brewery still has this beer in their seasonal line-up, they have opted to change the label, and really generic this beer up, in my opinion. It’s not so eye-catching anymore, and definitely loses it’s Metal edge, if you ask me. I am sure the beer is still just as good, though, which of, course, is the main point. I am hoping to get a new bottle of this beer soon. (Thanks to Will Cook for the photo of the new bottles)

I poured this beer into an American pokal style glass for this session. Snow Blind poured a clear, dark reddish brown color that on initial pour was topped with a half inch off-white colored foamy head. The head quickly vanished, leaving no lacing at all on the glass.

The nose was full of roasted malts, fresh baked dark bread blended with a dark cherry tartness. There were also a big whiff of brown sugar/molasses, and a strong caramel presence. The aroma was not very strong, but the sweet caramel, and roasted malts were the main focus.

The taste was malt heavy with a strong sweet caramel, and roasted malt body. There was fresh baked dark breads, dark cherry, figs, and sweet brown sugar/molasses also in the taste of this Doppelbock. There was a nice lingering sweet caramel, dark fruit aftertaste.

The body was thick and heavy with an oily, and smooth mouthfeel. There was low carbonation, almost flat. The finish was a mouth coating oily feeling.

Overall, I was impressed and happy to have had this beer. I again, thank my friend Will Cook for hooking me up! I am a fan of the Doppelbock style. I enjoy the big bold flavor, and thick, heavy body that most of them have. Starr Hill did a good job on this style. If you are ever up in the North East, go visit the Fair Winds Brewing tap room in Lorton, VA and tell Will BeerMetalDude sent you. Shit, for that matter, go to Crozet, VA, and visit the Starr Hill Brewery. After all, they are the main subject of this review. I was very happy to hear that Starr Hill was playing tribute to one legendary band like Black Sabbath, but I really wish they wouldn’t have wussed up the labels for this beer. It looks like they did a complete re-do of all their labels. 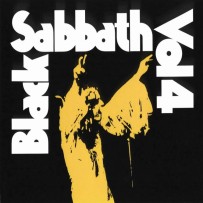 Metal Connection: Do I dare to not put the only obvious choice for the Metal Connection here? Do I spend wasted time searching for a suitable song to place here on this review? Hell Fuckin’ No! The beer was in tribute to this band, and named for this song, so there was no way in Hell I was not going to put this one here for the Metal Connection. Here is the song, “Snowblind” from Black Sabbath’s 1972 full length album, Black Sabbath Vol. 4. Previous to 1969, they were known as Polka Tulk, and as Earth. In 1969, the band became known as Black Sabbath, and from this point, became legends and known for being considered the first Heavy Metal band in existence. Many, many, many bands of all genres have been influenced by Black Sabbath. The core members of this band are easily recognizable by face, and written name, the iconic Tony Iommi (Guitar), Geezer Butler (Bass), Bill Ward (Drums), and of course the original voice of darkness, Ozzy Osbourne (Vocals). Over the years, the band has seen several changes in personnel, and saw some of the greats within their line-up including Ronnie James Dio (1972-1982, 1991-1992), Ian Gillan (1983-1984), and Glenn Hughes (1985-1986), among other musicians known in the Rock ‘n Roll world. Most of their albums, and songs are debatable as being the best of their career. For now, I am leaving you with one of their popular songs from the early days of Heavy Metal… Snowblind!