Ever since I was a little kid, my family has been visiting the city of Corpus Christi, TX when wanting to go to the beach. It is only about a 2 hour drive, so there were a lot of times, we just got up, packed for the day, took off to the beach and drove back home later in the evening. As I grew up and ventured into new realms of my life, including being in Metal bands, Corpus was a fun destination for us to play shows at. Now with the Craft Beer boom happening around the world, the city of Corpus now has their handful of breweries. The past few years, there was only one brewpub called B & J’s Pizza which featured their own brewed beers, but now there are several options for locally brewed beers.

A couple of weekends ago, I surprisingly had Saturday night off from work, so of course, we were looking for something fun to do. Traveling was always the plan, but we weren’t sure where we were going to go.  Just out of curiosity, I google searched Corpus Christi Craft Beer to see if there were any improvements, and low and behold, four new brewing companies came up. Instantly, we knew this was going to be the adventure for the day. We booked a hotel, mapped the route out, and took off.

Our first stop was Lazy Beach Brewing Company, which was tucked away, down a small side road, located at the end of a small business center. There was nothing fancy about the outside of this building. There was just a small sign with their logo above their door. We chose to visit this brewery first, cause of the four, they were the ones who opened up first, at 1 pm. We arrived a few minutes before 1 pm, and we seemed to be one of the first few customers for the day. There were already some locals inside, about done with their first round. The painted walls and decor around the tap room really made you feel like we were in a beach city, more like an actual pier bait shop or something. The taproom had a few tables for guests, a bar, taps that were on the side of the walk in cooler, one wall with windows facing another room that was their fermentation room that was filled with plastic fermenters. There was a back door that led to the garage part of the building which housed their brewing equipment in one room with a few picnic tables. The other garage area was their grain milling, and grain storage area which also had picnic tables, and games for the guests. Right outside the opened garage doors, there was standing room, a set up for a game of corn hole, and a designated spot for parked food trucks. We did not really pay attention to the food truck, as we knew where we were going to be eating later in the day. 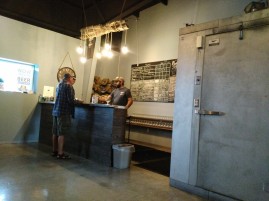 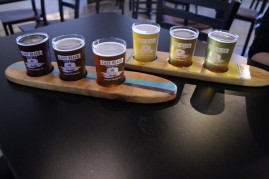 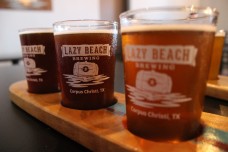 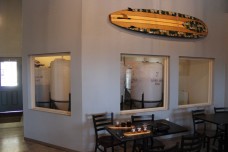 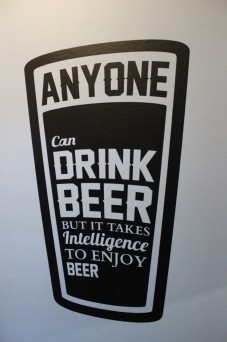 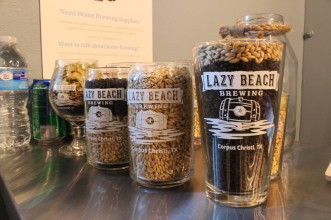 I was able to meet and mingle a bit with the brewery owner, Cory, who was a very nice guy, and was willing to chat it up. I could see that in the short time that they’ve been open, that they already had some regulars to their taproom. There was a very friendly vibe in there. The three employees who were there were very talkative with the guests, and helped made us feel right at home within their brewery.

They offered flights of their beers so I was able to sample their entire line-up that was available this day. My wife got a flight which held 4 beers, and I bought two trays during my visit. (Note: I do not do full beer reviews when drinking on location)

I was excited to be there at Lazy Beach, as it was my first brewery on this tour. Their beers were good, but I am hoping for some improvements. Their best beers, in my opinion, was OOH-RAH, and their Pumpkin Ale. I would love to see bigger beer offerings from them, and an improvement on their IPA’s. Their other offerings were all average beers, and I would drink them again if I came across their taps at a bar, or maybe one day, a can or bottle.

Our next stop was only 12 minutes away, and was a brewery I was really looking forward to visiting based on their name and logo. I am talking about Lorelei Brewing Company. After a short cruise, we find ourselves facing a small business front for Carpe Diem Development, LLC, and Corpus Bayside Construction & Remodeling. On the front corner of the building there is a sign that says Brewery with an arrow facing towards the back of the building. There is a larger sized building directly behind this construction office. It looks like it once was a car garage workshop with two large garage doors, which housed the brewing equipment, and where the office to that garage would be, is now the tap room. The whole complex was painted a bright blue, giving this brewery a very nice beach feel to it. After introducing myself to the very friendly staff, I was informed that this past weekend was just their 3rd weekend being open to the public. They had a good sized crowd already there when we arrived, and more and more people showed up throughout the day. Everybody seemed pleased.

They offered a total of 5 beers on this day, and they just so happened to offer 5 tasters on their flight tray. 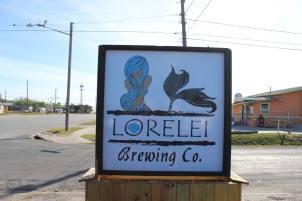 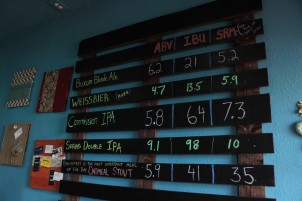 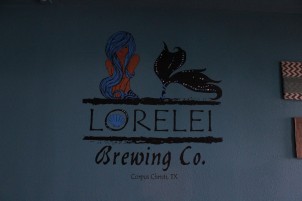 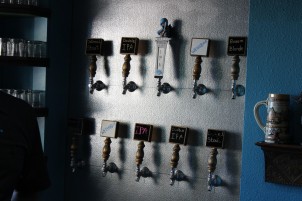 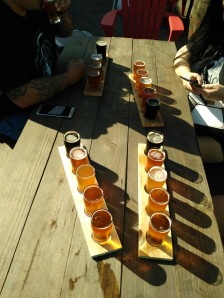 I really look forward to seeing what these guys will offer up in the future. This will be a great brewery to follow throughout their lifetime.

Our next visit was to Railroad Seafood Station Brewing Company, which was located more towards downtown, not too far from the Texas State Aquarium or Whataburger Field. This place was definitely set up more like a family friendly restaurant/brewpub. I was happy to have this one next on the schedule, cause I was already getting pretty damn hungry.

After entering through the door, we were met with the brewing equipment right in the front room. After the room, a quick look to the right, I saw a small room that was the bar area which looked focused on the beer taps. To the left, was the big dining room, which is where we sat. It was a big open room with lots of tables, and a big 3 sided bar right in the middle of the room. This bar also had taps, and was a full liquor bar.

Besides our waiter, who was a very friendly guy, I did not talk to any other employee, so I didn’t get much of a story on this place, but that’s OK, I was already feeling good, and just wanted to enjoy a good meal with my family and friends who was with me on this journey (my wife, Maria, my head chef, Dom, and his girlfriend, Norah). 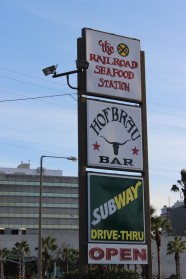 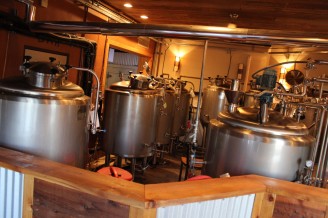 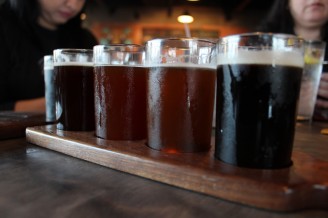 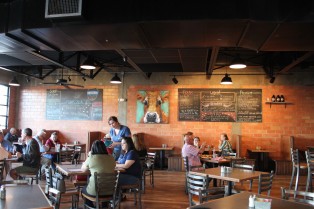 I ordered a flight of their beer offerings, Bock Queso (A blend of jack cheese, roasted peppers, seasoned ground beef and a bock beer topped with pico-de-gallo and avocado) as an appetizer, and their Fried Oysters Railroad Po’boy for the main meal. The food was outstanding, and the beers were good enough for definite return visits.

Well, here we are now at the tail end of our beer journey, and we find ourselves in downtown Corpus, where Rebel Toad Brewing Company is set up. This place is cool, and simple, with no fancy bells and whistles, just a taproom with some tables and bar stools at the bar. Some TV’s are set up around the place, and music playing over a speaker system. When their taproom is open on Fridays and Saturdays for selected hours, they will have a delicious food truck parked right outside their front door, parked curbside. I was way too full from the previous stop, but the truck they had this night, Iron Piñata, had a crazy good looking menu. My friend, Dom, who was with me on this trip, couldn’t resist, and gave in and ordered some food from there. That boy can eat, let me tell you!

Upon arriving to Rebel Toad, I was greeted by Nathali, the wife and co-owner to the brewery. Our conversation was about the obvious, beer, and after the introduction to my blog and to Mad Pecker Brewing Co., she said I looked very familiar and that they know me, or have met me before. Cool, I thought, but had to think really hard about it. Her husband, Hector, the owner and brewer of Rebel Toad walks in an immediately said Hi to me in a way a person would when they see someone they hadn’t seen in a long time. After thinking about it for a very long time, none of us could put our finger on where we knew each other from, but narrowed it to either my time at Big Hops or at Busted Sandal Brewing Company. They did some volunteer wok and brewed some stuff over at Busted Sandal before. Either way, it was really cool to meet them again(?). Ha ha! They were really awesome people, and I could just feel the love of Craft Beer flowing through them. Hector was nice enough to take me on a small tour to see the brewing equipment.

They did not offer flights as they did not have the proper glassware in just yet. I was told that this was their 3rd weekend being open, so they were still growing into themselves over there. No big deal. I was offered sample cups of all their offerings, so I could choose which beer I wanted a full pint of. Th samples were big enough to make a proper judgement on each of them.

I was very pleased with this visit to Corpus, to see these new breweries open. As you can see, my overall experience was a good one. I really look forward to following all their careers, and hope for a lot of awesome beer in the future from all of these guys. Now, the problem I see with this, is that now when I visit Corpus, I will have to manage my time between family fun at the beach, brewery visits, food, and relaxation time. Not that this is a bad problem to have, though. For all of you wanting to travel to Corpus for this same experience, I highly recommend it. Please visit all the breweries, and give them a fair chance as like in all cases in craft beer, our palates are different and we may like or not like the same beers. Congrats to all of these breweries and I wish them luck in their careers! Cheers!