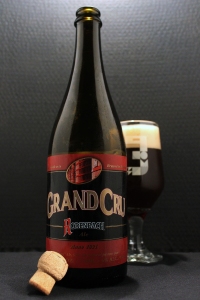 When I recently had this Grand Cru, it was the 2nd time in my life that I was able to enjoy such a fine beer. The first time was back in 2013 at my old place of employment, Big Hops Growler Station. I had seen this bottle at a local Total Wine, and figured I buy it, so I could give this beer a proper review. Brouwerij Rodenbach has many beers in their portfolio, but not all of them are available here in San Antonio for purchase. I am lucky that this one, their Grand Cru is, cause it is a very good beer.

This beer is sold in the large 750ml bottles complete with a cork and cage atop the bottle. Nothing spectacular about this label, as it is more of a traditional word only label. The label is colored black with red borders, and large golden colored letters for Grand Cru written across. There is a small circle drawing of the oak vats which reside inside the brewery.

I poured this beer into a 3rd anniversary stemmed glass for Branchline Brewing Company. This Grand Cru poured an opaque red with a purple-ish tint. It was topepd with a large 1 inch light khaki head that quickly disappeared, leaving no lacing.

The nose was tart dark cherries up front, followed by wine grapes, dry red wine, brown sugar, rock candy, and a hint of sourdough bread.The lingering aroma was similar to that of a tart red wine, or cherry fruit juice.

The first flavor to hit the palate is that of tart dark cherries, wine grapes, and red wine. There are characters of light apple cider, some hints of plum, a little oak wood taste, along with some Belgian yeast fruitiness, and some mild bready malts. There is a great balance to this beer, as none of the flavors out weigh another. Aftertaste is similar to a dry red wine, or cherry fruit juice.

The body is a medium-heavy thickness, with an easy drinking fruit juice slickness. There was low carbonation, and a slight tartness that tingles the jaw hinges a bit. The finish is dry, like a red wine.

Overall, I am very pleased with this beer. It is fine example of a Grand Cru, or Flanders Red Ale. It has the right amount of sour tartness, with a blended flavor profile of a Belgian beer, a sour beer, fruit juice, and red wine. For those of you afraid of sours, or who have been put off by other extreme sour beers out there, this beer is highly recommended to hopefully change your mind on the style. I would definitely drink this beer again and again and again and…. you get the point! 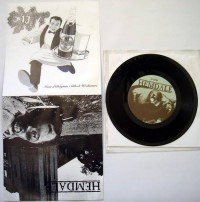 Metal Connection: Here is one of those beers that I thought it was going to be difficult to find a perfect Metal Connection to, as I thought there would be no way I would find a song with similar ties to the beer name, style, or brewery. When this happens, I usually find a band from the brewery’s region, and go from there. Well, the beloved underground Metal scene proved me wrong, as I found a perfect fit. In fact, this song could be used over and over again on this site, as the lyrics to this song pretty much is a list of Belgian beers, including Rodenbach. Let me introduce you to the band, Exit-13 from Pennsylvania. This band was led by vocalist, Bill Yurkiewicz, who was also the co-founder of the famed record label, Relapse Records. Exit-13 released 3 full length albums in their career from 1989-1997. In 1995, they did a split 7″ record with the Ohio based Grindcore band, Hemdale on the Visceral Production label, which was owned by Hemdale member, Craig Rowe. On this split record, Exit-13 recorded the song, Gout d’Belgium, which is the Metal Connection for this amazing Grand Cru. Just look at these lyrics, and realize why this was the perfect fit. Grind on, my friends!

Get startin’ with Hoegaarden!
I’m flash whacked on Pauwel Kwak!

I’ve raised many a glass with St. Sixtus
and deviled my brain with Duvel
My mind is as high as the heavens,
but my liver is burning in Hell!!!

Go get say, geuze or peche!
On framboise or kreik, get lambiclly geeked!

Belgium is literally heaven on Earth for the beer afficionado!
No other country can boast of more distinct, individualistic styles,
so rich and complex in character. Whether it’s the unique lambics
or the top fermenting, bottle conditioned strong ales,
Belgium’s beers deserve the most sincere reverence!
“This is drink most sensuous”

I’m the Stille Nacht snowman
and I’m drowning in Scaldis Noel!
My mind is as high as the heavens,
but my liver is burning in Hell!!!