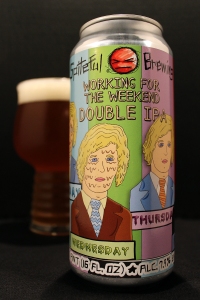 Spiteful Brewing has been a brewery I have been following due to their awesome, at times funny artwork for their beer labels, and their willingness to think outside the box with their beers. These guys won even more cool points when they righted a wrong for me. Months back, I had received a 22 oz bottle of their Mrs. O’Leary’s Chocolate Milk Stout. This bottle exploded, causing a huge mess all over my apartment. I was at work, and my wife was blowing up my phone, cause it scared the shit out of her, and unluckily, she was the one who had to clean the massive mess the explosion had left. When I got home from work, I had sent an email to the brewery, and within a day, I had received a response from Jason Klein, a co-founder and brewer. He sent me a care package for the trouble the exploding bottle caused. He sent enough beer, that I was able to share some cans and bottles with some friends of mine. This awesome Double IPA was one of the cans in the package. I would eventually tried to get my hands on this can anyway, but I am glad that these guys sent me this. Way to go Jason and team over at Spiteful. Great customer service!

As I said, I would have tried to get my hands on this beer, cause this label is by far one of the funniest and best ones yet by this brewery. I know the photo I did only shows a portion of it, so click here to see the full image of the label. The background is the TV station outage test screen with the different color columns. There is a drawing of a blonde guy for each weekday, beginning with Monday through Friday. The Monday face looks the worst, all droopy, melted, no eyes, really dead looking. Tuesday, his face gets a little less droopy, Wednesday, he gets blue eyes, and less droopy, Thursday, his face is all in tact, but he still looks a bit depressed and tired, and finally his Friday face is perfect, complete with shiny hair, perfect complexion, and a smile. I love this, cause I am sure 99.9% of the working human race feels this way, as Mondays are usually so dreadful, and of course, we all follow the “Working for the Weekend” code of life! Kudos to you Spiteful for this amazing label.

Using a specialty glass designed for IPA’s that I purchased at World Market, the beer poured a hazy burnt orange color topped with a 1/4 of an inch white foamy head. There was good head retention as a thin layer atop the beer most of the way down, leaving soapy spots of lacing down the glass.

The aroma was big on grapefruit pulp and peel, citrus orange, mango, lemon, peaches, followed by some biscuit bread, and a bit of floral greenery. The fruit notes dominate the nose from beginning to end of each sniff. The lingering aroma is slightly bready, but mostly citrus fruit, grapefruit.

Working for the Weekend has a big bitter bite up front with a taste of grapefruit pulp and peel, along with orange peel. There is a nice mix of lemon, mango, peaches, and floral greenery, with a biscuit bread backbone. For me, the lingering aftertaste was that of grapefruit and mango.

The body was slightly over medium with an oily mouthfeel with a very bitter prickly bite. There was moderate carbonation. The finish was dry.

Overall, this was a fantastic Double IPA. It was awesome to drink this one fresh. There was not a lot of notes on this beer on the Spiteful website, nor o the can itself, so I don’t know if there was any added ingredients to this beer, but I am sure if there was, they would say. The variety of hops used in this beer was a perfect combo, with great citrus, tropical fruit, and herbal characteristics. This is definitely a beer I will be seeking out again. Thanks again to Jason of Spiteful Brewing for sending me this awesome beer, along with some others that will soon be on the site. Cheers again, my friend!

80’s Hard Rock Connection: Being born in 1977, I grew up with the Hard Rock sound of the 1980’s. I owe my uncle George, my cousin Andrew, radio, and Mtv for this. As I usually put up a Metal Connection for the beer review, I decided to go back to my youth, and pick the most appropriate song for this pairing. I am talking about the 1981 classic hit, “Working for the Weekend” by the Canadian rockers, Loverboy. 1981, damn, I was only 4 years old at the time when Loverboy released their 2nd full length album, Get Lucky, which featured our song here. This song has never left the radio, as it went from modern day rock stations to classic rock stations. It is on almost every 80’s nostalgia greatest hits albums, and it lived on as a song played on the V-Rock station on Grand Theft Auto: Vice City (2002). Let’s be honest here… You know you know the song, and you know you love this song. Don’t be afraid to turn up the speakers, and sing along to this classic hit while enjoying this great DIPA by Spiteful Brewing.