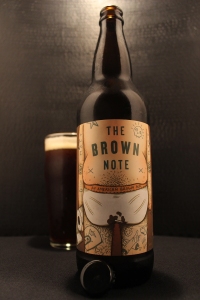 Every now and then there comes those people who love to push the limits all the way to the edge. In the beer world, I guess that would have to be Against the Grain Brewery from Kentucky. They have maid a large number of different beers in their career so far, and thy have some of the most wildest label art I have ever seen. It is all in cartoon form, and wildly put together for each label. The Brown Note is only the second beer I have ever had from Against the Grain, the first being a sample from a bottle share a coupe of years ago. I was introduced to this brewery by form of their Rye Barrel Aged Amber Ale, Kentucky Ryed Chiquen, which came with amazingly weird label art, and actual real feathers glued to the neck of the 22 oz bomber bottle. Yes, feathers!

Fast forward a bit, and I was able to get my hands on their American Brown Ale, The Brown Note by way of ordering online, and having my good buddy, Jorge Espinoza of animebeers.com send it to me. I always have to give props to this man for helping me get such amazing beers either by trade or just by simply sending me boxes that I order online. Cheers my friend!

Of course, I’m sure you have already seen why this beer was ordered. The artwork simply won me over 100 times, and I needed to have this bottle in my collection. The art is vulgar, obscene, disgusting, and incredibly awesome! I’m sure there are those who think this is immature or gross, and will never order it due tot his reason. I have to say , it will be your loss. This was actually a really good beer inside the dirty underwear. Yes, the artwork features a man’s back covered in cheaply done tattoos, a nice back patch of hair, and wearing tighty whities which have a special surprise, a series of large brown stains in the southern region. It’s fucking great. I love this label. I love anything that makes tight wad assholes shit in their pants.

I used a non logo nonic style pint glass for this session as seen here. The Brown Note poured a semi-hazy dark brown color, typical for the style. It was topped with a half inch light khaki colored foamy head, which looked creamy, similar to a nitro beer pour.  The head stuck around for almost the entire session, leaving a blanket sheet of sticky lacing down the glass.

The aroma is mostly full of big bold characters like chocolate, rich, sweet caramel, and toffee. There is some biscuit bread as well as some roasted malt. There are notes of earthy and floral hops. The lingering aroma in the nose is that of sweet caramel, and chocolate.

The taste follows the nose with all the same characters. This one has big bold flavors of chocolate, sweet caramel, and toffee, mostly. There is a backbone of biscuit bread, and an overall roasted taste. The hops are present with some earthy and floral notes. The lingering aftertaste is sweet caramel and chocolate.

The Brown Note had a medium-heavy sized body, with a smooth, and creamy mouthfeel that had moderate carbonation that hit the tongue with a bit of a bite. The finish was smooth, and left a mouth coating oily feeling.

Overall, the flavor of this beer thankfully matched the outrageous label art. I was very pleased by this, as I was so hoping that this beer would not suck. Anything with this type of label art needs to be good! American Brown Ales are not everyone’s cup of tea, and I get that, but I just hate it when I read bad reviews of this style based on it not being hoppy enough, or living up to the standards of raising the bar, blah, blah, blah. I am one, who is a fan of this style. The rich, sweet, and roasty flavors and the smooth thick body is something I look forward to with each beer I have of this style. Of course, those are my standards for this style of beer. Please do yourself a favor and get some Brown Note in your life!

Punk Connection: My first look at the label art for The Brown Note automatically made me think of one person, GG Allin, due to the cheaply done tattoos on the body. I understand that GG Allin is nowhere near Metal, but his extreme stage presence, and lifestyle will live long in the minds of all, well most, well, OK, some Metal heads from around the world. There might be some of you out there who have no idea who this evil genius is, so let me introduce you to him. He lived for 36 years, dying on June 28th, 1993, a day after his final performance. The last show was only 2 songs in, and the club pulled the power due to his antics of being naked, defecating on stage, fighting, eating and throwing feces on the crowd members. He then walked and terrorized the New York neighborhood, only to party the night away, and overdosing on heroin.

During his musical career, he played with several members as his back-up band, including one called The Texas Nazis. During this time, they recorded a live show in Dallas, TX and called the release Boozin and Pranks (Live in Dallas). Here is where you will find our song of choice for this Punk Connection, “Eat my Diarrhea.” This song is simple, catchy, vile, and disgusting. Everything this man stood for.  Of course, this song was specifically chosen due to the nature of the lyrics so it could match the dirty shit stained underwear picture.

2 thoughts on “Beer Review: Against the Grain Brewery & Smokehouse The Brown Note”