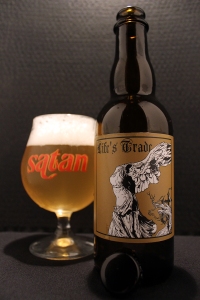 In 2011, a brewery was spawned from the deepest, darkest depths of Hell fire in Colorado known as TRVE Brewing Company. The brewers and the brewery itself bleeds Heavy Metal, pure evil, and excellent Craft Beer. I have been wanting to visit this brewery ever since I first heard about it. I have also really wanted to get my hands on any of their bottle releases. I have not had any luck over the years getting these, until finally, when a good friend of mine, Kortney went to GABF 2015. If it wasn’t for the Untappd app, I wouldn’t have seen that she was there at TRVE, so I have to thank my friend, and the wonderful Untappd app for this accomplishment. I sent her a text message and pretty much threatened her to bring me back something from TRVE. Ha ha! She told me that they only had one bottle release at the time, and I said “GRAB IT OR DIE!” She later told me that the bottle she got me was the actual last one being sold. Thanks to the Evil forces that caused me to notice she was there.

This beer was named after an album by the Doom Metal band, Samothrace from Seattle, WA. The artwork for the beer is very similar to the work done for the Life’s Trade album. The overall yellow background is similar with a black and white image of a headless winged statue twisted into a creepy tree, which can be seen gracing the cover of the album. Similar headless statues can be seen on their second album, “Reverence to Stone” and on their live album, “Live at Roadburn.”

Appropriately poured this beer into my Satan Red snifter glass, Life’s Trade appeared a cloudy bright yellow color, which was topped with a large 1 inch white foamy head. There was great head retention with big lines of lacing left down the glass.

The nose was tart and sour with notes of lemon, wheat, hay, farmhouse funk, and blended with some vanilla, biscuit bread, woodiness, and hints of mango.

The taste was very similar to the nose. There was an overlaying tart sourness with layers of flavor underneath. There are notes of lemon, wheat, hay, and some farmhouse funk. Just like the aroma, there are characters of vanilla, woodiness, mango, and some biscuit bread. The aftertaste is lemon and mango mixed with farmhouse funk.

The body was light with a slick mouthfeel. It was a very easy drinking beer. The tartness of this beer left this beer with a dry finish which worked well with the lemony and funky aftertaste.

Overall, I will say that I was impressed by this offering from TRVE, and I was happy that I was not let down by the brewery I was seeking out for so many years. I am a big fan of the Saison style beer, so this was also a big part of the first experience treat. I know these guys have brewed some extreme beers, and I hope to one day get my hands on them, but they do consider this their most classic beer produced. It is a great beer to pay homage to a traditional beer style.

Metal Connection: This Metal Connection was one of the easiest ones I have ever done. This beer was named after the debut full length album, Life’s Trade by the US Doom Metal band, Samothrace. These guys play slow, and long songs, so this album clocks in at 47:18 with only 4 songs in total. I went with the 10 minute long epic song, “Awkward Hearts” as the Metal Connection. This song has everything we would want in a Doom Metal song. There is a long intro to this song full of heavy pounding drums, and a great acoustic guitar rhythm before the bulk of the song kicks in at 4 minutes in. The guitars are fussy and heavy with sorrowful and painful vocals. In the song’s lyric’s, they do have the words “life’s trade” in almost every verse. I can see why the guys at TRVE named a beer after this album.