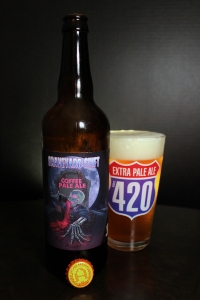 Here we have a beer that I bought solely because of the beer label. I could care less what the beer was that was inside this bottle. I just knew I had to have this bottle in my collection. I mean, just look at that label! More on that in a minute, though.

I will never get tired of thanking my fellow beer bloggin’ friend, Jorge Espinoza of animebeers.com for once again, helping me get this beer into my hands.

As I mentioned earlier, this bottle was purchased due to the artwork on the label. First of all, it reminds me of something that would grace the cover of an 80’s horror flick. The background is dark as midnight complete with a large full moon. The main art piece is a corpse in a brewer work shirt rising out of the grave while pouring, what looks like blood being tossed back and pouring out of the skeleton’s mouth onto the ground. The colors make it look like a negative photo. I’m telling you, very reminiscent of a cheesy B-movie horror/gore flick. Way to go Arcade Brewing!

I used a regular shaker style pint glass by SweetWater Brewing Co. for this session. The beer poured a hazy pale copper color topped with an inch wide foamy head. Excellent retention as a thin layer atop the beer with large lines of lacing left down the glass.

The taste is just like the nose with all the same characters. Roasted coffee beans, cocoa powder, vanilla beans, and pale malts make up the bulk of the taste of this beer. There are flavors of caramel, and a mild chocolate behind the other flavors that peak through with each sip. The overall dominance to me are the roasted coffee beans and chili powder flavors. In fact these flavors linger a bit on the taste buds afterwards.

The body was a bit heavier than a typical medium body. The mouthfeel was smooth and had a dry finish which worked really well with the aftertaste of this beer.

Overall, I was impressed by this beer. I am really digging the whole normal stout/porter flavors, such as coffee appearing in pale ales, blondes, and such. It really messes with your mind at first. You see the beer and expect something completely different than what you actually get. Those that live in the Illinois area are lucky to have a brewery like Arcade. These guys make some solid stuff, for sure. So rise from the grave with this coffee pale ale, and enjoy some mighty fine craft beer! 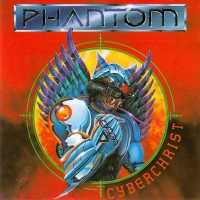 Metal Connection: Reaching into the obscure Metal world, pulling out a little known Power/Speed Metal band called Phantom from the grab bag on this Metal Connection. Phantom comes to us from New York City, and was formed in 1985. The song, “Graveyard Shift” comes from the band’s 3rd full length album, Cyberchrist. This album features Ex-Nuclear assault guitarist, Anthony Bramante. He performed on Nuclear Assault’s first 4 albums, Game Over, Survive, Handle with Care, and Out of Order. This is the only Phantom recording to feature Anthony Bramante. This is my first time ever hearing any music by Phantom. Sometimes putting together these Metal Connections open new doors to new bands for me. Enjoy the fine shredding by Phantom while knocking back a Graveyard Shift Coffee Pale Ale by Arcade Brewing!