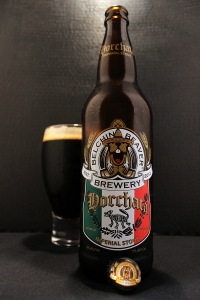 Here in Texas, I have seen a few Belching Beaver bottles being shared, because someone received the bottle in a beer trade. I finally was able to get my hands on a few of the beers from this brewery thanks to my good friend, Jorge Espinoza of the awesome animebeers.com/Nubis Sanctum Ales for the amazing hook up here with this beer.

Most, if not all Belching Beaver bottles have the same similar look to them all, but with minor differences. For this particular bottle, the main colors of the crest-like label is that of the Mexican flag, Green, white, and red. There is an ancient Mexican animal motif on there under the word Horchata, which is written in gold in an Old English font. The typical Belching Beaver logo sits atop the label complete with the cartoon beaver wearing a sombrero.

I used a thick stemmed glass that has an American Pokal shape to it. I believe I bought this set at Target or Walmart, I can’t remember. This beer poured a very dark brown, near black. It looked kind of like a dark soda. It was topped with a half inch dark tan foamy head, which reduced down to a thin layer atop the beer rather quickly, but leaving soap sud-like sticky lacing down the glass.

The aroma is definitely sweet. It really does remind me of a horchata drink. There is a nice mix of smells including vanilla, rice milk, sweet sugar, chocolate, cinnamon, and a small hint of coffee to give it this effect of smelling like a horchata. Other characters in the nose include raisins, tres leches cake, hazelnut, and some caramel. Sweet milk sugar, vanilla, and cinnamon make up the lingering aroma in the nose after each whiff.

The taste is the same as the aroma with real horchata flavors popping out. Rice milk, vanilla, sweet sugar, and cinnamon. There are some earthy notes, chocolate, caramel, hazelnut, and a blend of flavors giving off a tres leches cake taste. There is a small hint of coffee towards the end. The lingering aftertaste is vanilla and cinnamon.

The body is in the medium-heavy range as far as the thickness of this beer. The mouthfeel is smooth, and creamy with low carbonation. This beer has a slick, yet drying finish which works with the end flavor of cinnamon.

Overall, I gave this beer a 5/5 rating due to the fact that Belching Beaver hit a grand slam with this bad boy. They promised horchata, and they produced horchata. So many flavor profiles popped out with this beer. I was happy to have let this beer warm up a bit, as the flavors really shined brighter as time went on during this session. I see many beers from Belching Beaver that I would love to drink, and hopefully one day I will be able to get my hands on more of them.

Metal Connection: Well since there is no Metal song about Horchata, I had to figure out where I was going to go with this Metal Connection. The label of this beer is colored like the Mexican flag, so I chose one of my old favorites from the country, Disgorge. As there was a rise to fame in the underground Metal scene for two bands by the same name, the Brutal Death Metal band, Disgorge from California, our Metal Connection choice was known to many by the name Disgorge (Mexico). Their first two albums were widely popular among the scene, as they had real life gore photos as their covers, causing some uproar with the tightwads in this world. Their sound is best described as a meat market butcher running all saws and grinders at the same time on large chunks of beef. Their sound puts images in your head of torturous acts, similar to those on the movie series, Hostel. The song I chose here, “Rancid Bowel Sarcoma” is from the band’s debut album, Chronic Corpora Infest, which was released in 1997 on American Line Productions. This is my favorite track from the album. It is fast, vicious, gore-soaked, and just fucking sick from beginning to end. The vocalist on this album was Antimo Buonnano, who left the band after their third full length album, Necroholocaust. There are a lot of people, including me, who said Antimo’s vocals is what made the true Disgorge (Mexico) sound. Just listen to this track, especially at the 2:00 mark of the song. Just fucking sick. No other words are needed to explain this sickness.