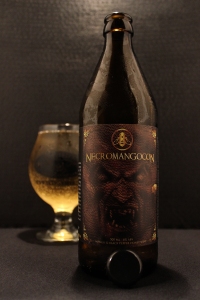 What is there not to love bout B. Nektar Meadery? I mean these guys make rebel meads. They think outside the box for sure. I first saw their offerings on a few different online bottle shops, and I knew I needed to get my hands on some of their stuff. They have some killer graphics on their labels and equally as bad ass are the names of their meads or ciders, which includes such names as Kill All the Golfers, Death Unicorn, Zombie Killer, Dragons are Real, Zombies Take Manhattan, and The Mutant Killer Zombie Manhattan Project Thingy among others. The first mead I purchased from them is the ever so cleverly named, Necromangocon, a mead made with honey, mango, and black pepper.

The label looks like it could be something right off a Death or Black Metal album, specifically a 7″ record sleeve… Yeah, that’s it! It is a purplish leather looking label made to look like a book cover, specifically, the Necronomicon, complete with an evil demon face bulging out of it. There are gold corner pieces and latches, with the Meadery’s logo and the word Necromangocon in the same 3-D gold. There was no way I was not going to get this one in my collection.

I used a Twisted X Brewing Company snifter glass for this session. The appearance of Necromangocon was a clear, very light yellow color, looking a lot like a white wine. Being a Mead, this did not have a head present upon the initial pour.

The aroma was dominated by the presence of mango fruit followed by a nice whiff of spicy black pepper, but don’t worry, that wasn’t very strong. The sweet honey then takes over the nose. Mango and honey linger a bit in the nose, overpowering any trace of black pepper or anything else for that matter.

Th taste is just like a straight up mango juice drink up front. There is a heavy dose of sweet honey up next. There is an underlining accent of spice from the black pepper, but like the aroma, it is not very strong. The subtle black pepper adds a nice spice to the sweet honey and mango. The aftertaste is a nice combo of all the flavors wrapped up in one. Imagine a lightly peppered piece of mango dipped in honey.

Necromangocon had a medium body, leaning a bit towards the heavy side. The mouthfeel was slick like honey with a slight spice bite. The finish was oily, leaving a mouth coating feeling.

I must say that over the past few years, I have slowly gotten into drinking meads and ciders. I used to never even look in their direction. I am very glad that I opened up to these kind of drinks. Necromangocon is a great example of thinking outside the box when it comes to meads. I can see why now that B. Nektar Meadery calls themselves Rebel Meads. Overall, I was very pleased with this drink. I love mango, and the fact that the mango flavor was big and bold in this mead, really impressed me. I am glad that the actual product matched the awesome label on this bottle. Right now this Meadery is not available in TX, so I did have to get this bottle from a friend. As usual, I do have to send a huge thanks and shout out to my good buddy, Jorge Espinoza of www.animebeers.com for helping me get this bottle. 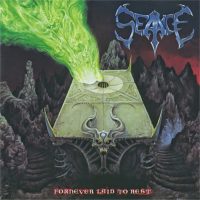 Metal Connection: During the 1990’s, Sweden’s Black Mark Productions was a heavy hitting record label spitting out albums left and right from some of the world’s finest acts including Bathory, Edge of Sanity, Agressor, Cemetary, Necrophobic, Fleshcrawl, and Memento Mori, among many others. One of the other bands that came out on that label was Sweden’s Seance. Seance formed in 1990, and lasted until around 1998, releasing 2 full length albums during that time. They reformed in 2008 to release third full length album and perform live gigs. Nothing has been released since 2009’s Awakening of the Gods album even though they are still listed as an active band. The song I chose from Seance is called “Necronomicon” from their 1992 debut full length album, Fornever Laid to Rest. I remember buying this album when it was released. Back then before the easy access of the internet to check out new music, I used to just buy CD’s based on the band logo, and/or album cover. This was one of those albums. Featuring artwork by Dan Seagrave, who seemed to have done about 99% of all Death Metal album covers in the 90’s, this one was a definite pick up once I gazed upon the cover. The one thing that sets the song, “Necronomicon” apart from the rest of the heard at the time was the opening riff and the whispering style vocals of the opening lines. This song is heavy, technical, and brutal. Influenced heavily by American Death Metal from this era rather than sticking tot he normal “Swedish Sound” that was in all the bands from that area. Fornever Laid to Rest still remains in my normal rotation on a daily basis to this day. You should do the same!