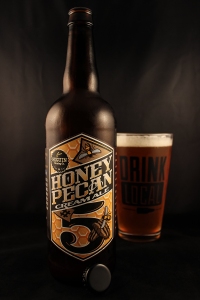 Back in 1999, I joined a band named Putrilage where all the members besides myself resided in the small town of Seguin, TX. I would have to drive over there almost every weekend. Well, I was scheduled to go over there every weekend, but sometimes I just didn’t get to make it! During those years, there were no breweries around the way they are today, especially in small towns around Texas. Around 2013 a brewery by the name of BS Brewing Company opened up in Seguin, then a year later, to my surprise, another brewery opened up, Seguin Brewing Company. I have tried beers by both breweries since their openings, but we are here to talk about just one of those beers by just one of the Seguin breweries. This is the flagship beer by Seguin Brewing Company. Let me introduce you all to Honey Pecan #5.

As this label should be, the colors used here are all in shades of yellow, orange, and brown. The background of the label is a close up of a honey comb. There is a large ribbon across the label which displays the name of the beer. There are some bees drawn on the label including one who is sitting on top of a couple of non shelled pecans. This label really works for this beer.

I decided to use a pint glass that says “Drink Local” that I purchased at a grocery store for this session. Honey Pecan #5 appeared a semi-hazy bright golden honey color topped with a 3/4 of an inch white foamy head. Good retention throughout as a thin layer, which actually left a big sheet of lacing down the glass.

This beer’s aroma is simple, but delivers on it’s promise of what is expected. Honey is huge in this nose up front, followed by whipped cream, a bit of vanilla, some light cereal grains, a mix of floral hops, and a healthy dose of pecan nuts to round this one out. As the beer warms, the honey definitely stands out even more. The lingering aroma is all honey and whipped cream.

The taste is similar to the nose. The taste is all honey up front, blended well with flavors of whipped cream, light cereal grains, a little sweet vanilla, and some floral hops. The pecans, for me, didn’t really show up until the end of the sip. I did let this one sit and warm up a bit, and I was hit by even more honey flavor as the beer warmed. The lingering aftertaste was honey, whipped cream, and pecans.

Honey Pecan #5’s had a medium sized body with a mouthfeel that was silky smooth, creamy, and a dry finish. Moderate carbonation kept this beer alive.

Overall, I was pretty impressed with this beer. It delivered on its promised flavors and then some. It was also an easy drinking beer and is good for both the novice or seasoned craft beer drinker. I am very happy that there are new breweries like Seguin Brewing Company popping up all around me. This is a great flagship beer for this brewery. I have tasted others, and so far, they have all been solid releases. More reviews to come.

Metal Connection: At the beginning of this review I mentioned the fact that I used to be part of a band that was from the town of Seguin, TX. Seeing as finding a fitting Metal song that uses the words “Honey” or “Pecan” was pretty impossible, I thought I would use a Metal Connection from within the city limits of this brewery. I give you Putrilage. The members of Putrilage were jamming together already under the name Carrion, and did a few originals and some killer covers of Death, and Gorguts. Bother were huge influences on the music at that time in the mid 1990’s. I joined the band in 1999, and brought with me a spiral notebook full of lyrics, ideas, and the new band name. I even did the original Putrilage logo. It was later touched up by famed artists, Jon Zig. I could go on and on about our biography, but I am here to tell you you about the song chosen for this Metal Connection. I chose the ending track, “Hack, Slash, Cut…You Bleed,” from our debut album, Devouring the Gutted released on Forever Underground Records in 2002. This was one of my favorite songs to perform live. The vocal pattern throughout the song was catchy, fun, and easy to fuckin’ rage to while on stage. When the song changes and goes into the Thrashing part at about the 1:18 mark, that would be the pit starter, for real! At the 1:56 mark, we went into full TXDM mode, and did what kids are calling slam. Back then, we just fuckin’ jammed. The pits were more violent back then, and not full of these scenester kids doing karate kicks and shit. Alright folks, go ahead and find yourself this very good beer from Seguin Brewing Company, and head bang to this old school jam from one of my old bands. Just remember to never count out the small towns around you!!!