A few months ago I posted a review of the first beer I ever had from Amager Bryghus. It was Wrath, a Saison/Farmhouse Ale that is part of the Sinner Series. Here we have another beer from this Denmark brewery that I received in beer mail thanks to my good boozin’ buddy, Jorge Espinoza (animebeers.com). Since receiving this bottle in the mail, it has now received approval to be sold here in Texas. In fact, I saw this beer at a local store just earlier today. Oh well, at least I can say I got this bottle before it was cool to buy locally. hahaha!

You all know me, the label art plays a major part for me. At least, , in helping me choose which bottles I would like to have in my collection. Well,t his bottle is nothing to go crazy about. I actually just wanted this beer cause of this brewery, and the high ratings this beer had received. The label is a shiny golden foil color with the label focusing on a close up of some grains, and barley sprigs. The name of the beer slapped across this image along with the brewery logo. As I said, nothing special. I have seen that the brewery has re-made the label for this

beer, and I love the new artwork a lot more. I won’t go into details on it since it’s not featured on this particular bottle, but here it is for you to see. So much better…

Poured this beer into a Naughty Brewing snifter glass. (Hmmm, I wonder what happened to this brewery?) Hr. Frederiksen poured a black color topped with a small brown foamy head, which quickly disappeared. No sight of any lacing at all.

The taste was similar to the aroma with flavors of dark and roasted malts, which hit the palate first, figs, raisins, caramel, and chocolate make up the body of this beer. There are traces of floral hops. Booze hit at the tail end and lingered with a slight burn along with the aftertaste of caramel chocolate and dark fruits.

The body is surprisingly thinner than I imagined this one to be. Not quite watery thin, but pretty thin, none the less. Very low carbonation, with a sweet, slick mouthfeel with a tiny bitter bite to it, and dry finish.

Overall, I can see why this beer receives such high scores. I was expecting more of a thicker body, though, but I still gave this bad boy a 5 out of 5 rating due to the amazing aroma and taste. Amager Bryghus nailed this beer! I am really looking forward to picking up some more bottles from them now that they are approved to sell in Texas. Now, I don’t have to hunt them down on the internet and have to wait for them in the mail. I still have a couple of bottles in my cellar that I need to drink and review from them. I am sure they will be amazing beers, as well. 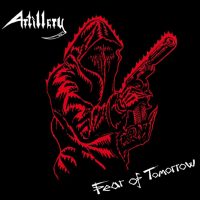 Metal Connection: Amager Bryghus are based in Denmark, and knowing that I would not find a song with a similar song title to this beer name, I went with a band from Denmark for this Metal Connection. I also thought this song title to be fitting for this connection, since I gave this beer the highest rating, and ranking of the almighty! I give to you Artillery, a legendary Thrash Metal band, and their song “The Almighty” taken from their 1985 debut full length album, Fear of Tomorrow. This song is everything Thrash Metal should have been in 1985, and is holding up just fine after all these years. “The Almighty” has catchy riffs, vocal patterns, fast pummeling drums, basic song structure, and a kick fuckin’ ass attitude!