Ironfire Brewing Company out of Temecula, CA has some very interesting beers, and some of the best  beer labels I have ever seen! If it wasn’t for my good buddy, and fellow beer review blogger, Jorge Espinoza of animebeers.com, this beauty and maybe some others, may not be gracing this site of mine. So, thank you brother! I look forward to sharing my thoughts on more of their beer, but for now, let’s focus on this beauty, a barrel-aged Imperial Red Ale vintage 2013 called Outcast Dead.

As I said, Ironfire has some amazing labels, and Outcast Dead did not disappoint in this area. Etched right onto the bottle, this label’s artwork is a black and white drawn skeleton dead man arising out of a whiskey barrel. The only color on him is the red blood on his hands and face. In fact the only other color on this art piece are the golden-brown wooden barrels. It’s such an awesome piece. It would look great on a wall in a pub or on a shirt.The name of the brewery and the beer style is in the same golden-brown color as the barrels, and the name Outcast Dead is in the same blood red that’s on our rising dead man. It fuckin’ slays, seriously!

I poured Outcast Dead into a Ranger Creek Brewing snifter glass. The beer appeared a semi-hazy caramel reddish-brown color that was topped with a light tan half of an inch foamy head. There was good retention as a thin layer, leaving spotty lacing down the glass.

The aroma was caramel up front, followed by some strong oak wood, boozy whiskey notes, vanilla, and coconut notes left from the barrel. Earthy, and floral hops are present. There is a nice sweet sugar candy finish.

The taste was big an of bold flavors. The oak wood is pretty dominant blended with some caramel, whiskey booze, vanilla, and coconut left from the whiskey barrel. There was a nice presence of earthy and floral hops. Besides the bold flavors , this beer was sweet and bitter on the back end with a little sweet brown sugar taste. The aftertaste was strong oak wood and earthy aftertaste.

The body was medium, but leaning towards heavy. The mouthfeel was slick and oily with a mild carbonation. The finish was hot and dry.

Overall, I was pleased by this beer. I love getting beer mail, and there is an awesome beer like this in the box. This was was a real winner from the packaging to the beer itself. I really do hope to get more beers from Ironfire Brewing. I, once again, want to send a huge thanks to my buddy Jorge Espinoza for helping me get this beer. I love doing this site, and I love being able to review beers which are not not normally available to me here locally. This one was special, as I really enjoy Amber/Red Ales, and with this one being an Imperial version, aged in whiskey barrels, that just jumped this one up into the awesome realm. This notes on this beer says it is at 120 IBUs, but with the age of the beer at this point, the hop profile, and bitterness did fade a bit. It was still present, but just not so dominant. Definitely more balanced. Great beer! 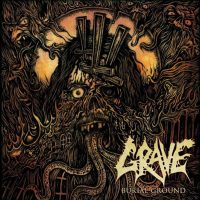 Metal Connection: This Metal Connection was fun. There were several options I could have gone with on this one, but I did go with an old favorite Death Metal band of mine. I am talking about none other than the Swedish Death Metal legends, Grave. The band actually started in the mid 1980’s under different monikers like Rising Power, Destroyer, Anguish, and Corpse, before finally becoming Grave in 1988. The Corpse demo, Black Dawn is a collector’s wet dream. Several demos were released by Grave, which are all collector’s items as well. In 1991, Grave released their amazing debut full length album, Into the Grave on Century Media Records. Guitarist, Ola Lindgren is the only original member still present in the band. Grave has never really stopped, releasing album after album to this present day. 11 full length albums, to be exact. The song “Outcast” comes to us from the band’s 9th full length album, Burial Ground from 2010 on Regain Records. This song is exactly what is expected from this band. It has that Grave sound that they have had their whole career. This song will make you want to head band, possibly mosh around your house, destroying all your valuables. If you have lived under a rock or just plain fuckin’ stupid and never heard of Grave, you have a long journey ahead of you going through their catalog. Metal!