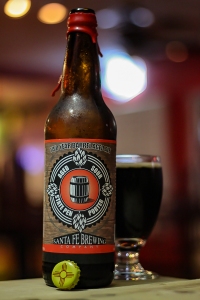 I have been drinking Santa Fe Brewing beers since 2011, well, at least according to my Untappd check-ins. I know for a fact that I was drinking beers from this brewery even before that, cause of a certain memory I have of chugging down a bottle of their Barleywine, Chicken Killer when celebrating with my wife’s (then girlfriend) family for New Year’s Eve, and almost burning down a neighbor’s yard. It was nuts. Anyway, nothing has been rated below a 3/5, and even with that one rating, it was back in 2011, when my palate was a lot different than it is now. I am sure I would appreciate that beer a bit more now (Nut Brown Ale was this beer, by the way). State Pen Porter was one of the first beers I ever had from these guys, and I loved it back then, and I still do to this day. I was pretty excited to see this barrel-aged version with Brettanomyces at my local store.

A pretty simple design for this beer. The whole label is wood grain like a barrel with a circle logo as the main focus. The circle is straight to the point and simple, featuring a drawn barrel in the middle surrounded by the words “Aged Sour State Pen Porter” with four hop cones. No big artwork needed here. This one just screams out “limited release!”

Pored into a small stemmed glass, this beer appeared black in color topped with a 3/4 of an inch tan foamy head. There was great retention, leaving a sheet of lacing down the glass.

Body was medium in thickness. The mouthfeel was slick, and velvety with a dry finish. Very mild carbonation present.

I was nervous about this one, just as excited as I was about this beer. I love Brett in beer, but there are times where it can be off putting, depending on the base beer, I guess. I have seen some Porters with added Brettanomyces on the bad list, to be honest. I am glad that Santa Fe did this one right. As I stated earlier, State Pen Porter is a solid base beer, and one that I thoroughly enjoy. I look forward to one day tracking this beer down again. 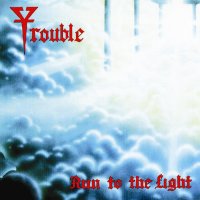 Metal Connection: Here is a band that has had a strange career, and one that I didn’t really follow until the later years. I am talking about the Chicago based band, Trouble. I got into this band on their 1992 album, Manic Frustration when the band dove more into a psychedelic doom state. When they first began, they were more Christian themed and all Heavenly and shit. Not really my cup of tea. I went back and heard their first few albums and really dug the music. Here for this Metal Connection I pulled out the full length album, Run to the Light from 1987. Seeing as this beer is State Pen Porter based, I went with a song about being in prison. In this case, “Born in a Prison” seems to call the world the subject’s prison. The song is a rockin’ Heavy Metal tune with strong Doom influences. Very Black Sabbath-like. At the 1:06 mark of the song, it slows down and gets heavy as Hell for the next minute or so. So many head banging sections in this song. I wonder if they still play this song live now that they have Kyle Thomas (ex-Exhorder) on vocals. I bet it would sound fucking killer!