My good friend, Dominic Ramos, who I have known for a few years now because we have worked at a couple of places together, visited Colorado and brought me back a mixed 6-pack from his favorite brewery on his trip, Renegade Brewing Company. This was the first beer that I drank from this pack. I had never heard of Renegade Brewing Company before this, so I was very anxious to crack these cans open. According to their website, Redacted Rye IPA is their taproom’s #1 seller on draft, and is one of the company’s flagship beers.

Originally, this beer was created in the backyard of the brewery founder, Brian O’Connell. It was once known at Ryeteous, but in 2013, Renegade Brewing Co. was served a cease-and-desist letter by Sixpoint Brewery because of the similarities to their canned beer, Righteous Ale, which is also a rye-based beer. Not happy by this, Renegade appropriately renamed their beer Redacted. Here are my thoughts about this beer, which I really did enjoy.

The entire can is white with a large letter R in black representing the icon for this beer. The word Ryeteous is under the letter R, but it is crossed out with a black line through it, and the word Redacted right under it. Pretty simple, yet very clever. Bravo, renegade, bravo!

Poured into a Red Headed Stranger IPA glass by Ranger Creek Brewing, Redacted appeared a semi-hazy bright golden color topped with a nearly 2 inch white foamy head. There was good retention as I went through this beer, and there was excellent web-like lacing down the glass.

Redacted had a great hop aroma, which hit the nose first with citrus orange, mild grapefruit, floral notes, and some spicy pine. There was also some rye malts, light caramel, biscuit bread, and black peppercorns. The lingering rye left the nostrils dry with a spice and black peppercorn-like aroma.

Same as the nose with a big hop flavor hitting the palate first. Citrus orange, some grapefruit, some floral notes, and spicy pine characteristics. The body was made up of rye malts, light caramel, biscuit bread, and black peppercorns. The aftertaste was big bold rye bread.

Redacted’s body was medium in size, and had an astringent, and spicy mouthfeel, with a dry finish.

This was a very good beer, and I am very happy that I was able to get a hold of this can. I am a big fan of Rye IPA’s, as I love the spiciness, and dry finish that they normally have. The finish works so well with the lingering rye bread-like aftertaste in this beer. I want to thank my friend, Dominic Ramos once again for hooking me up with this can! Cheers my friend, and cheers to you all, as well. Hope you get to taste this delicious Rye IPA. I look forward to tasting it again one day. 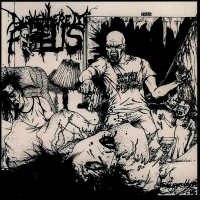 Metal Connection: To be honest, I had a hard time with one. Like I normally do, I searched through the database for songs with the name of the beer in it. No luck on that end. I did run across a band called Redacted, so I thought I could use them, and it would be simple. Well, they fuckin’ suck! They suck so bad, that I could only get through the first few seconds of each song heard. Horrible guitar playing, horrible vocals, horrible lyrics, and horrible use of industrial in their music. Here is one of their songs, “Skywatchers” just for shits and giggles.

When I can not find a proper song by using the title as a reference, I do the next best thing, and go with a band from the same city as the brewery. I now had a ton of choices I could have used here. I remembered an old Grindcore/Noise band from Denver, Colorado that I used to love called Dismembered Fetus. I went with my favorite track, “Ebola” from their 31 track full length album, Generation of Hate from 1996 on Pibeoneck Records. This song has it all that I loved from this band, speed, speed, speed, and more speed mixed in with some punk elements, and a distorted bass guitar that added such a killer tone to their recording on this album. I just love that back then in the 90’s era of the Underground music scene there were bands named like these guys, and not a lot of bitching was done within the scene like now a days. It was the outsiders, or “normal people” who did the bitching, but that was expected.