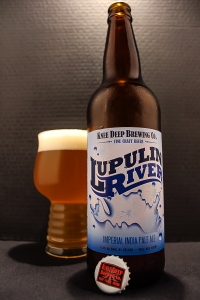 At one point I remember people here in Texas trading away for beers from California’s Knee Deep Brewing Company, as they were not licensed to sell here in our great state. My very first encounter with this Auburn, California brewery was back in 2014, when I received their Imperial Black Rye IPA known as Midnight Hoppyness. I never reviewed that one, cause I believe I received an out of date bottle, so the flavor profile was all out of whack! A good friend of mine, Larry Ramirez, who happens to travel a lot cause his job as a local San Antonio news Sports Anchor happened to bring me back a bottle of this delicious Imperial IPA right here for my second ever experience with this brewery. Right after I had received this bottle, they became available here in our market as of January 2016. I have since had several of their offerings, and beers such as Lupulin River, I have had on many occasions. I do want to send a shout out my friend Larry for first introducing me to this beer back in December 2015. Cheers, buddy!

I poured this beer into a Hard Cider glass by Libbey, cause it’s very similar to an IPA glass with just a wider body. Lupulin River started off hazy, but cleared up pretty quickly, with it’s bright orange/copper color. It was topped with a ½ inch white foamy head that stuck around as a thick layer atop the beer, leaving a sheet of sticky lacing.

The nose was fresh, and spicy with an aroma full of citrus orange and tropical fruit like, mango, papaya, pineapple, mixed with some lemon zest, passion fruit, fresh pine, floral and grassy hops, and rounded off with some biscuit bread. A great aroma bouquet. The citrus, and the array of fruit linger in the nose.

As with with aroma, the hops are up front in the body, and aftertaste. They just never go away with this one. Orange and lemon zest, tropical fruit like mango, papaya, pineapple, and a skunky passion fruit mix together with fresh pine, grassy and floral hops. There is an underlying flavor of biscuit bread beneath all the hop characters. As mentioned, the aftertaste is all fruit from oranges to pineapple.

Lupulin River had a medium, body that was astringent and fizzy in the mouthfeel. Moderate carbonation. This beer finished dry.

I am so glad that this beer is available in bottles and on draft at my local watering holes. It is great to just pull up to the bar and order one of these bad boys. I don’t to worry about shipping anymore. Ha ha! The great thing about this beer is that every time I’ve had it, it never disappoints, and never changes at all in the slightest. Please seek out Knee Deep Brewing if you are into IPA’s and Double IPA’s. Their line up of hoppy stuff is great.

Metal Connection: “I got the razor at my wrist ’cause I can’t resist. I’ve got this fever burnin’ fist that does as I wish. But when I get downtown and see what’s around, I just know there’s got to be a better place to be found. Oh, God help me! The river runs red and I think I’m dyin’!” These are lyrics that most all of you will know.

If you grew up listening to Metal in the early 1980’s-1990’s, a lot of classic albums were coming out on record labels like Roadrunner. In 1993 this record label released an album called River Runs Red, the debut album by New York’s Crossover/Metal/Hardcore hybrid Life of Agony. They were virtually newcomers and hit with a vengeance around this time. I remember seeing these guys on tour back then. I remember seeing their music videos on Mtv’s Headbanger’s Ball show. I remember hearing their songs on college radio. Their music was both liked by underground and mainstreams fans alike. For good reason, too. These guys were good. Their title track, “River Runs Red” remains one of my favorite songs, and every time I listen to it, it brings me back to my youth, and the crazy shit I used to back then, getting into the whole underground Metal scene and such.

They never really stuck with me though throughout my life, and I did hear their music from their later albums, but they never grabbed me the way River Runs Red did. After numerous break-ups, it seems the band is back together again, and have an album about to be released (April 2017) called A Place Where There’s No More Pain on Napalm Records. This will be the first album where the singer will be listed as Mina Caputo, because in 2011, Keith Caputo announced he will transition from male to female. Check out the new music video for their single from this new album here. Their music has gone a bit softer and more mainstream in these days. I will always go back to River Runs Red, though. So here it is, the title track from their 1993 debut album in all it’s 1 minute and 55 second glory!