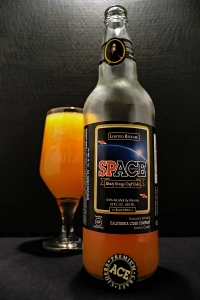 I will probably say this on every review of a cider, but when I first started this site I really hated, or I should say, knew little of ciders, so I was being Mr Beer Macho and bashed them pretty bad. Now here we are, a little over 4 years, and now I respect, and love certain ciders.

The California Cider Company, or Ace Ciders is one company that has pleased me with their offerings. This out of this world, Blood Orange Cider is simply amazing. Check out my tasting notes on this limited release cider.

First, let’s talk about the label, as I like to do. The usual Ace Cider layout, which shows the art within a rectangle shape similar to a playing card, since all of their year round releases look like an Ace card with different art in the middle of each label. This one has little drawings of Saturn where the Ace “A” would be, and the middle art is the edge of the earth with the sun peaking around the edge. It looks like a still of the Universal Pictures movie intro. Branding, company logo, and specifics about this cider make up the wording within the artwork. Not the most artistic, eye catching label, but what does catch your eye is the fact that this cider is presented in a clear 22oz. bomber bottle, showing off the amazing bright color of the cider.

I used a Karbach Brewing Company Yule Shoot your Eye Out goblet for this session. This Blood Orange Coder poured an opaque, cloudy bright orange. Identical to orange juice or like a mimosa.

It was crisp orange in the nose right up front and all the way through. There was a slight tartness, and rounded out by a sweet sugary aroma. I imagined sparkling champagne.

This tastes exactly like a mimosa. Flavors of orange juice, like the frozen concentrate kind. Sparkling champagne slight boozy taste. It’s so simple, yet so god damned tasty.

The body was light with a prickly bitter acidic fruit mouthfeel, and similar finish.

Overall, this is by far one of my favorite ciders out there. I have had the pleasure of having this one from the bottle and on draft at a local spot here in town. It’s very delicious. It’s so crazy how my tasting notes for this were so short, and simple, yet I find this drink excellent, and I gave it the highest rating of 5 out of 5. It delivered on exactly what it says. The appearance of this cider is what drew me in from the get go when shopping at my local bottle shop. I recommend this cider if you are looking for something really unique, and fuckin’ delicious!

Metal Connection: The name Arjen Anthony Lucassen should not be unknown to you, if you are into Progressive Metal/Rock music. He has been the main driving force behind the awesome band, Ayreon, and other side projects such as The Gentle Storm, the Arjen Anthony Lucassen band, and others. Star One follows the same idea of having various musicians perform on each album, including Dan Swanö of Edge of Sanity fame, among millions of other bands, Floor Jansen of Nightwish, Russell Allen of Symphony X and a plethora of others. Star One released their debut album, Space Metal in 2002 on InsideOut Music. The lyrical themes on this album involve outer space, fantasy, and Science Fiction, so finding a song to pair with Ace Space Bloody Orange Cider was rather easy when looking through the tracks on this album. “Intergalactic Space Crusaders” is the song I went with. This track is about exactly what the title says. The awesome part of this song is the trading off vocals between Damien Wilson, Russell Allen, and Floor Jansen. Please check out this amazing Sci-Fi Metal song, and crack open a Space Bloody Orange Cider, and enjoy the ride through outer space!