Here is one bottle that I had been wanting for a while. I had seen the advertisement for this beer in a beer magazine once, and fell in love with the logo and artwork of the bottle. One day I finally was this bottle on a shelf at a local store in Houston, TX and instantly purchased this beer, since I have never seen it here in San Antonio. The shitty part about this all, is that I was a bit disappointed in this beer, overall. Here is my description of this Belgian beer, but first…

Let’s talk about this label, and the story of Druon Antigoon. This Flemish folkloric character was a mighty giant who lived in Antwerp, a city in Belgium. His tale was that he would guard a bridge on the river Scheldt, and would collect a toll for those who crossed the river. If they refused, he would sever one of their hands off and throw it into the river. The story would conclude that one day, a Roman soldier named Brabo would cut off the giant’s hand and throw it into the river, suffering the same fate as Antigoon’s victims. The story of this beer is also a strange one. From what I gather, this beer was only available in draft, and available at Brasserie Beck with the help of Brouwerij De Musketiers. The beer was commissioned for Restaurants by Robert Wiedmaier.

The label of this beer displays art of young Brabo severing the giant’s hand off with a large stream of blood flowing from the arm to the hand on the ground. The name Atigoon is drawn similar to a good old school Death Metal or Grindcore band logo, looking like it was written of gooey blood. On this version of the label, the logo is displayed above the giant, and is arising from two chimneys from the city behind our characters. I have seen another version of the label where the logo was actually a lot more bloody and was flowing from the severed arm. Well, as of no surprise, the good hands of today’s generation has taken away this amazing label, and given this beer an overhaul. The new label features art of the giant Antigoon in his armor, which looks modeled after an art piece that was made in 1534. The beer looks boring as Hell now. Why wold they take something so awesome and simplify it to appeal to the masses? Oh wait, I just answered my own question. Blah!

Poured into a tulip-style glass, Antigoon was a clear pale golden color topped with 3/4 of an inch white foamy head. Excellent head retention, leaving a large sheet of lacing down the glass.

Big and bready was the first hit in the nose. Fresh baked biscuits is a big player in the aroma along with mild banana, and a mild tart funkiness from the yeast. There was also a sweet sugary aroma, and mild grass and earthiness from the hops. A distinct Lager-ish corn aroma rounds this one off.

The taste was the same as the nose. Bready biscuit flavor hits the palate first, followed by a slight tartness, and banana with sweet candy sugar, grass and earthy hop characters. The finishing flavor is a distinct Lager-ish corn syrup taste.

The body is medium with an oily slickness mouthfeel with moderate carbonation. The finish was also still slick and oily.

Overall, I was not a huge fan of the blending flavors here. It didn’t sit well on my palate with an odd ratio of the applying characters in this beer. I don’t know if the bottle I purchased was old, or improperly stored at the store. I read so many positive things about this beer, only for this experience to be very disappointing. I do know that if I see the awesome old labels around that those bottles are old, so I guess I will have to search out the new boring labels that are now representing this Belgian beer. 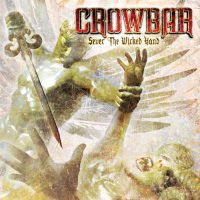 Metal Connection: With the folklore story behind the name of Antigoon, which includes severing hands, I thought I would for sure find a great Metal song about this mythical giant, or at least about severing hands. I did some intense research and came up blank, until I went with “Sever the Wicked Hand” by Louisiana’s very own Crowbar. Yes, that Crowbar. The one’s formerly known as “The Heaviest band in Metal,” due to the size of the members in the band at one time. This song comes from an album of the same title from 2011 on eOne Entertainment.

These guys get lumped up as being part of the metal elite most hated due to their affiliation with one Philip H. Anselmo, as members of Crowbar also jam in the band Down with the infamous ex-Pantera vocalist. I rather enjoy the music of Crowbar, and this song is no exception. It is heavy, fast, catchy, and just fuckin’ rips! I hear a little nod to old Acid Bath in this track. Just sever the wicked hand of those not paying the toll and throw that shit in the river!