Here is the final day of my birthday vacation trip. What a hell of a trip this was. 16 breweries within 3 days. We wanted to do more, but of course, we’re only human, and our livers were already pushed to the limit with all of these breweries.

On this day, we started off by visiting a very cool brewery by the name of Bitter Sisters Brewing Company. This brewery is housed in a small business center in Addison, TX, which was about a 45 minute drive from our hotel. From the outside, you really can not tell how big this brewery is, cause the strip center all looks the same on the outside. When you first go through the front door you are right into their small, but cozy taproom. The brewing equipment is behind a wall that at least has large windows to see the equipment, so it’s not like you are in one big warehouse space. The taproom and brewery are separated. Large posters of their labels are hanging all over the taproom, along with a largely drawn Bitter Sisters logo one one wall. 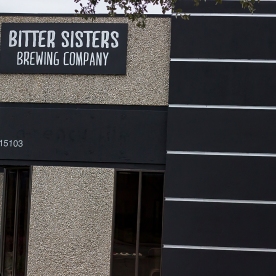 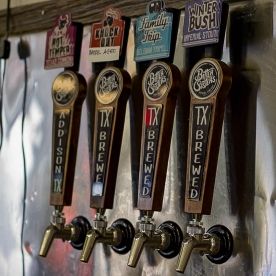 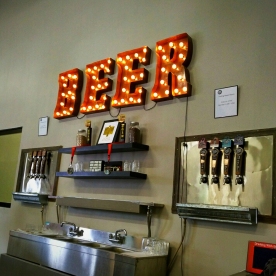 We got a flight of their offerings and felt that their beers were pretty good. Check out what we had then.

Our next stop was to Bishop Cider Company. Yes, we went Cider! Why, because at the time, Bishop Cider Co. was the new hotness. Their Crackberry brand was flying off of tap walls everywhere I went in San Antonio. I had to see what the rest of their brands tasted like. This was the first time ever going to a Cidery. So, Bishop has two locations in Dallas, but we only went to one of them. One location is just a tasting room, and the other is their production facility with a taproom. We went to the production facility. 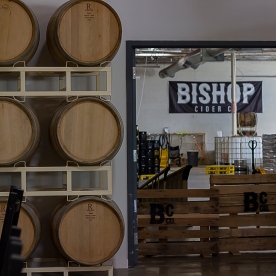 Well, Bishop Cider Co. did not disappoint.  We were able to sample some of their goods. Check out what we had. The last one was called Legendberry, and it was a strawberry cider that was over a year old. The founder, Joel Malone was kind enough to share it with us. He didn’t want to at first, cause it was way past it’s shelf life, but surprisingly it still tasted great.

[Update] Since our visit though, Bishop has now made this location the Cidercade by adding over 165 video games, along with 24 taps of cider. I really wish this shit was like this when we went. Our photos do this place no justice anymore. Check out the Cidercade website.

Our next stop was to Peticolas Brewing Company. This brewery has been a fan favorite for some time now. In fact, these guys make some award winning beers. At the time of our visit their hours open to the public were very minimal, so we had to rush over there to make sure we got there in enough time to hang around and enjoy their offerings and surroundings. Luckily, we made it. We loved their spot. It really reminded us of a large loft, or some fancy frat house or something. 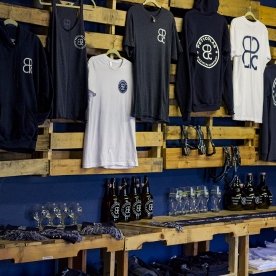 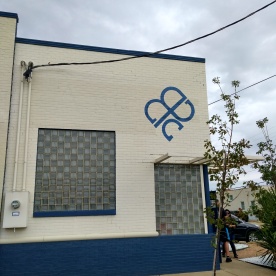 Check out what beers we had while visiting.

[Update] Since our visit, they have extended their hours, now being open Tuesday – Sunday. Another cool fact about this brewery is that they were the 2018  Grand National Champion at the US Open Beer Championship. They won 2 silver medals and 3 gold medals. Way to go guys!

Our next stop was to Noble Rey Brewing Company. It was a pretty close drive, as it was about 1.5 miles away. I always try to set up our trips with not a lot of driving in between stops. I had beers from Noble Rey a year before at the Craft Brewers Festival in Austin, TX. Then earlier in 2016, a local spot in San Antonio called Hop & Vine was able to bring in a couple of kegs to be tapped up. I was really looking forward to this stop, as I had heard that the brewery had an awesome look. I believed it based on their amazing can designs, which all feature different cartoon-like characters on them.

We ended up chatting it up with some locals who we had actually met at a couple of the previous breweries that we were at earlier that day. I guess they had the same idea we had. You know, try to visit as many breweries and drink as many beers as we could without throwing up or arrested. Ha ha!

We were able to get a flight of beer of what they were offering.

We’re still not done yet, almost, but not quite! We found ourselves traveling nearly 3 miles to Texas Ale Project. I am glad we stopped by this cool spot when we did. They weren’t open their whole entire hours for the day as a wedding was going to happen soon after our arrival there. This place was nice and big. The biggest facility of the day so far. No wonder someone would choose this place for a wedding. It was set up real nice for them.

So, we got a quick flight of beer, then headed out as soon as we were done. Previous to this visit, I had a couple of beers from them. I had Party Like it’s 1773, a tea spiced Ale, which I drank at the Craft Brewers Festival in Austin, TX back in 2014.Then I had their American Amber/Red Ale, Fire Ant Funeral which was from a can. I had this one at home. Check out what we had at the brewery.

Now we venture to our last stop of the day, the last stop of this entire birthday weekend. We went to Community Beer Company, which by the way, is less than a mile away from Texas Ale Project. That was awesome! Community Beer Company was awesome! It’s strange from the outside, as it looks like it took over an old furniture store or something similar looking in a shopping center. That definitely added some character to this place. Inside though, it was a large taproom, with tons of tables, games, a small stage for live music, and of course the bar. 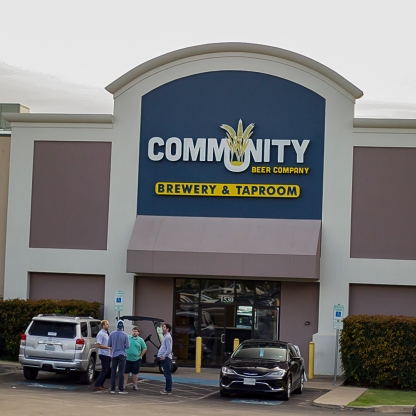 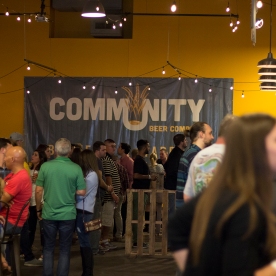 The one thing is, they didn’t offer flights, so we got full pours of beers, which by this time, we really slowed down. I only had 2 beers while there. I have had several of their offerings since 2013 though, so they were nothing new to me at the time. We were just happy to finally visit the actual brewery. So, I’m sure you all can imagine, we were feeling really good by this time, so we mingled and partied with some people there. We were by this group of dudes who were playing the large Jenga set they had there. We all got along and hung out the entire time we were there. There was such a friendly atmosphere there.

What a great weekend this was. We had such a great time at all these breweries that we visited. We can’t wait to go back again. Cheers!