It seems like daily I am hearing about a new brewery opening up in Texas, and I am trying to visit each one of them. On one of my last visits to Houston, I was able to visit a couple of new breweries, including 11 Below Brewing Company, located on the far Northwest side. I had never had any of the beers from this brewery until that day, and I was thoroughly impressed by their selection. When I was leaving H-Town, I stopped by a local liquor store, and bought single cans from their line-up, including Color Blind, their Red IPA.

Let’s talk about the can for a second. The artwork used on the cans by 11 Below are unique and definitely their own. They look clip-art style. This silver based can has a red and black colored unicorn shooting stars and a red and black rainbow from the tip of the horn. Maybe, I’m not hip tot his reference, but I don’t see the connection here with the name and the actual artwork. Either way, I do like the work on this can!

I wanted to use an IPA glass for this one, but I went with the regular shaker pint here, cause it was the 11 Below Brewing logo glass that I purchased from the brewery when I visited. The appearance was a clear reddish, copper color topped with a 1 inch light eggshell colored foamy head. A thin layer of the head retained throughout, leaving web-like lacing down the glass.

The aroma was citrus orange juice, orange, lemon peel, spicy pine, and floral greenery, all from the hops, which overpower the nose. There is a light caramel malt body with a touch of a little roasted malts, and fresh baked biscuits. The combo of hop characters linger in the nose a bit after each whiff.

The taste was complimentary to the nose, as they were identical. The hops overpowered the palate with notes of citrus orange juice, orange and lemon peel, some piney and floral greenery characters balanced with a light caramel malt backbone, some light roasted notes, and fresh baked biscuits. The slightest difference here between the aroma and the taste is that there was more caramel malt flavors in the aftertaste mixed in with the hop characters.

Color Blind had a medium body with a mouthfeel that was astringent, and spicy with moderate carbonation. The finish was nice and dry, which worked perfectly with the hop characters that lingered in the aftertaste.

Overall, I was impressed with this offering, but I do prefer more malt characters to shine through in Red IPA’s. This one had it, but it was muted behind all the hops. I still rated this one a 4 out of 5, but  would have gone higher if this one had the heavier malts in the flavor. I will definitely be buying more of this beer in the future to share with friends. If you find yourself in the Houston area of Texas, please go check out this brewery and their tasty offerings. 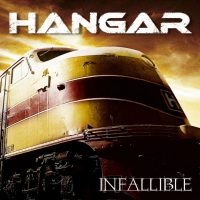 Metal Connection: So according tot he bio of this band, and it’s members, I should have been aware of this band’s existence, but to be honest with you, this is the first time I have ever heard of the Brazilian band, Hangar. These guy have been around since 1997, and have released 7 full length albums to this day. Their drummer, Aquiles Priester is somewhat of a bad ass. Again, I feel so uncool not to have ever paid any attention to this guy until now. He has been with this band since their inception, but throughout his career he has played with Angra, Paul Di’Anno, and Primal Fear (one of my favorite bands). He was also one of the drummers who was trying out for Dream Theater after Mike Portnoy left the band.

The song chosen here for this Metal Connection holds a similar name, “Colorblind.” This songs comes to us from Hangar’s full length album, Infallible from 2009. This 5:30 minute gem has some amazing drum work by Mr. Priester, spawning tons of cover videos on YouTube. The technicality of the guitar and bass work and the vocal approach compliment the obvious best part of this band, the drums. Check out this amazing song which is about being colorblind to the world around you, and finding your way.