When I am not drinking Craft Beer, I am found drinking some of the other good stuff known as coffee. I’m that idiot coffee drinker who will drink it t the worst times, and have me wide awake for hours upon hours at the strangest times. I hit the bed, when normal people are arising for their days. Why do I bring up coffee, you ask. Well, its simple. This review is for Gigantic Brewing’s Too Much Coffee Man, a beer brewed with a custom roasted cold pressed coffee by Coava Coffee Roasters from Portland, OR. Most coffee beers are based with Stouts, Porters, or maybe even Brown Ales. Gigantic went a step away from the norm, and brewed a, Imperial Black Saison, and blended the coffee right in there. This was a pretty interesting beer to say the least. Please read on to see my views on this strange brew.

Like all the other Gigantic Brewing Company’s beers, this one features another different artist. This time they went with indy comic book creator, Shannon Wheeler. His comic is actually called “Too Much Coffee Man” and has been featured online, and in various print other media like The Onion Newspaper or The New Yorker Magazine. See his work on his site, tmcm.com. Mr. Wheeler created a weird comic book superhero here for this beer label. This tubby little character sporting a red one piece suit similar to, let’s say, The Tick. Our little hero has four legs, a TMCM (Too Much Coffee Man) emblem on his chest, and a coffee mug head piece. His eyes are bulging and looks crazy wide awake. He looks like he is in the motion of running, while holding a cup of coffee in one hand and a beer bottle in the other. I’d love to read the adventures of our more than likely drunk, yet wired superhero!

Using a Tulip glass, Too Much Coffee Man poured a black color topped with a half inch tan head, which quickly died, leaving no lacing down the glass at all. I was hoping for more head (don’t we all) on this beer.

I did enjoy the aroma of this beer, as cold pressed coffee, chocolate, vanilla, smoke, char, grains, wheat, malts, black pepper, and slight banana filled up the nose with each whiff. The banana, smoke, and coffee linger a bit in the nose. The aroma was pretty complex. My only complaint was that it fell off by being a bit thin.

The taste had all the same characters as the nose. Cold pressed coffee hit the palate first, followed closely by some chocolate, vanilla, smoke, and char. Grains, wheat, malts, black pepper and light banana make up the body of this beer. Coffee and banana flavors linger for the aftertaste. Again, the overall taste was complex, but it was also a bit thin.

Too Much Coffee Man had a light and thin body.The mouthfeel was crisp and chewy with a bitter bite. There was mild carbonation, and a dry finish.

Overall, I really wanted to like this beer a lot more than I did. Don’t get me wrong, it didn’t suck or anything. It was quite tasty. I love Saisons, so this Imperial Black Saison caught my attention, and like I said before, I fucking love coffee. The overall flavor was complex and was blending quite nicely against the palate. It was the thin and light body that threw this one off for me. If it had a thicker body, and more head retention this one would have received a higher rating from me. As you know though, to each their own, and I just like to give a basis of an opinion on these beers, and I hope that I help you out with your decision making when purchasing beers. 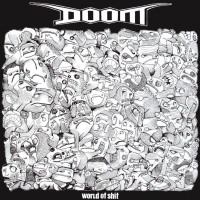 Metal Connection: Does Crust Punk count for a Metal Connection? Sure it does! Here we have Doom, am English Hardcore Crust Punk Rock band who’s original line-up was around from 1987 to 1990. This time frame for this band was a pivotal piece in changing the world of extreme music. Doom is cited as a precursor to the Grindcore scene.

The band would reform again in the early 1990’s and again around 2010. There are several releases under their belts including 6 full length albums to this date, 1 split album, EPs, demos, and compilation appearances. In 2001, Doom released their full length album, World of Shit. This 11 song album is fast, angry, and just down right ugly (in a good way). One of the songs on this album was a perfect fit for this Metal Connection. I give you “Can’t Smell the Coffee.” This track is about just being too busy, and aggravated with the world around you. No time to just chill out. So, like the character on this beer label, just always sped up and ready to run. Enjoy some D-beat Crust Punk Grindcore.