Rogue Ales have been putting out some interesting beers over the years, and their bottles match the craziness within. They are normally all colored bottles with an interesting label art. I am sure you have all seen the Sriracha hot sauce bottles on the shelves of your local grocery store. Well these guys over at Rogue decided it was a great idea to brew a beer with this hot sauce. Let’s see how this one came out.

Of course, you know me, the labeling is important as I am a visual guy and like to see some eye catching beer bottles. Rogue has taken one step further by coloring the entire bottles as part of their marketing for each beer. Everything about this bottle label is exactly like the actual Sriracha hot sauce bottle. The placement of the wording, everything. Funny part is, the words are replaced with wording revolving around this beer. For example on the Sriracha Hot Sauce bottle it says Tương Ớt Sriracha above the rooster, and on the beer bottle it says Rogue Rooster Sauce. I love that Rogue even put the bottle cap in light green just like the light green spout tops on the hot sauce bottles. Very clever. Very clever, indeed.

I used a store bought fat based goblet glass for this Chili Beer. The beer poured a near black, very dark brown color. It was topped with a dark tan half inch head. The head disappeared quickly, leaving no lacing.

The aroma was a bit shocking. I really thought that the addition of the hot sauce would intensify the aroma, but it wasn’t like that. Sweet milk chocolate, and a lactose sugar aroma hit the nose first followed by some mild sriracha hot sauce, dried chilies and red pepper flakes. There was a bit of soy sauce and some biscuit bread to round out the aroma.

The taste was close to the aroma, but some more characters came to the party in the taste. Sweet milk chocolate, and lactose sugar hit the taste buds first, just like it did in the nose. Some flavors of roasted coffee, red dried chilies and red pepper flakes blend with biscuit bread, herbs, spices, and sriracha sauce. There was a lingering burn of Sriracha Hot Sauce mixed with chocolate.

Helping this beer out was the thick and heavy body. The mouthfeel was smooth and oily with a lingering burn, and a smooth and slick finish.

To be honest, I was a bit scared of this beer at first before I ever tried it. Of course I received my first bottle of this stuff from my buddy, Jorge Espinoza of animebeers.com. He had sent this beer to me way before it was available for purchase locally. As I always do, I have to send a huge thanks to him for sending me my first bottle of Rogue Sriracha Stout. The mixture and complexity of flavors within this beer took me for a spin. I loved that this one was majority a sweet stout to my taste buds. The addition of sweet milk picked up in this chili beer really rounded out the flavor here. I have always wanted to try this one on draft. Hopefully one day I will be able to. 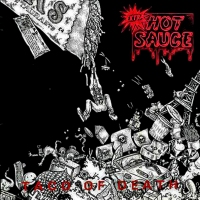 Metal Connection: I knew exactly which band I wanted to use for this beer’s Metal Connection. It was an easy choice. What better band to pair with a chili beer than the short lived Grindcore band, Extra Hot Sauce. This band was a side project of the bass guitar playing underground legend, Dan Lilker. This dude’s resume of bands is way too long to post on here, but I will name a few of them for yo who have no clue who this is. He has played in Anthrax, Nuclear Assault, Brutal Truth, Exit-13, S.O.D., and many, many more. Extra Hot Sauce was only around long enough to release 1 demo cassette, and 1 full length album, which were both titled Taco of Death. Normally Mr. Lilker plays bass, but with this project, he was sitting behind the drum kit, grinding it out. I went with the song “Clueless Fucks” for reasons being that I believe there are a bunch of Clueless Fucks who will never try this beer, or any Craft Beer for that matter. So Grind on ya bastards!