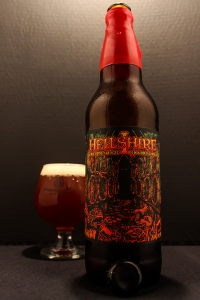 Back in 2014, I saw a review posted on my friend’s website, animebeers.com, and I knew immediately that I needed my own bottle of the good stuff. I am talking about Hellshire I, a Bourbon Barrel-Aged Barleywine by Oakshire Brewing Company from Eugene, OR. Hellshire is their annual barrel aged beer release complete with a Hellshire Day at their brewery. It seems that they are up to Hellshire VII this year. Unfortunately for me, I have had only this one, BUT, I do have Hellshire II & III still in the cellar. I promise that one day I will drink them. I once again have to thank my good friend, Jorge Espinoza for helping me get these beers. For now, check out my opinion on 2011’s Hellshire I. I’m sure there are some of you people out there like me, hoarding bottles in a cellar somewhere, and this bottle is still there, all dusty, ready to be downed.

So, of course I love name of this series, Hellshire. It’s like an evil version of some Lord of the Rings type shit going on. This bottle was waxed in red, which worked perfectly with the colors of the label, red, orange, yellow, and some bright green. It all looks so damn eerie. The artwork is a tight hallway with barrels on either side, presumably holding aging beers. At the end of the hallway into the pitch black are a pair of glowing red eyes, which I assume is the Devil or the demon watching over the barrels. In the hallway are a bunch of different demons, or different versions of the devil all guzzling down some beer from their mugs. If this is Hell, I am glad I have my one-way ticket already earned.

I used a small snifter glass from Strange Land Brewery for this beer. Hellshire I appeared an opaque dark reddish brown hue that looked like caramel. It was topped with a small ¼ of an inch khaki head, which quickly disappeared, leaving no lacing on the glass.

The taste was similar to the nose with some slight differences. Caramel malt, toffee, brown sugar/molasses, sweet hard candy were all there along with some earthiness, and some dark fruit flavors like raisins. The aftertaste was boozy, woody, and sweet.

Good heavy thickness on this beer. The mouthfeel was smooth with a dry finish. No real carbonation present.

Overall, this Hellish beer was fantastic. I know it was aged so I did not count off for certain things, and I gave this beer a perfect 5/5 rating since I highly enjoyed the taste of this beer. This one really won me over from the very first sight of this beer, for obvious reasons. I also, do enjoy a good Barleywine from time to time.

Stay tuned for reviews on Hellshire II & III, as those are the only other ones I have from this series. 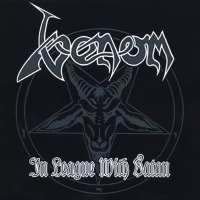 Metal Connection: Here’s a band that really needs no true introduction. Venom has been a major influence on thousands upon thousands of Extreme Metal bands from around the globe. With a beer named Hellshire, and such an evil looking label, I had to go with an old school classic Satanic song. Due to YouTube pulling off the original video I was going to post, which was the original version of the song “Welcome to Hell” from their 1981 debut album of the same name. I instead, was able to find a video that should not be pulled off, but it is a re-recorded version of the song which first appeared on the Venom ’96 EP, which marked the first recording of the then reunited classic Venom line-up of Cronos (Bass, Vocals), Mantas (Guitar), and Abaddon (Drums). The video posted here is from a series of published videos from Venom’s Greatest Hits compilation, In League with Satan, which was released on Castle Communications in 2003. This is an all time favorite song among the Extreme Metal Underground scene. Even though, this is a cleaner up re-recorded version of the song, it’s not that much different from the original. Feel free to drink some craft beer and worship Satan! Hails!