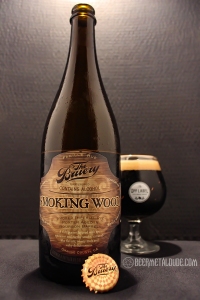 Went into the cellar for this one. We all know, or at you all should know who The Bruery is. This brewery has been pumping out some serious beers over the years.They make beers that can be aged for a while and still hold it’s awesomeness within the bottle. Here was one of those beers for sure! And, as usual, I have to thank my good buddy beer trader from Cali, Jorge Espinoza of animebeers.com.

You can always tell a beer by this brewery by their large bottle format and their crest shield-like labels. Obviously nothing really fancy here. It’s their colors that they use that represent each of these beers. Just as the name suggests, this one is very wood like. They keep it simple and to the point.

I poured this beer into a snifter glass, which is from No Label Brewing Company, representing their Off Label Nightmare on 1st Street beer. Smoking Wood appeared a very dark brown, just a hair shy of black. The beer was topped with a khaki colored 1/2 inch foamy head, which remained a thin layer atop the beer, leaving soapy spots of lacing.

A big hefty aroma of smoked toasted malt, smoked wood similar to a recently put out bonfire hit the nose up front. There was also hints of chocolate, vanilla, caramel, raisins, brown sugar/molasses, toasted rye bread spiciness, and some bourbon complete with a slight burn. The lingering aroma of a campfire and bourbon bring back memories of when I used to go… oh wait, fuck that, I’ve never gone camping!

For me the smokiness hits the taste buds first, just like the nose. Big smoked malt, toasted rye bread, smoky burning wood, caramel, raisins, brown sugar/molasses, small hints of chocolate, vanilla, and some cinnamon round out the body of this beer’s flavor. Bourbon is present as well. Lightly toasted raisin rye bread soaked in bourbon in the aftertaste.

The body was slightly over medium in thickness, with a smooth mouthfeel, and moderate carbonation. A very dry feeling in the finish.

Overall, this mother fucker delivered in its promise that is written right on the front of this beer’s label. Usually I am not a big fan of smoked beers, but this one worked well with all of it;s other components involved, especially the bourbon barrels. Aging this one too really helped, as I am sure the overall flavors were mellowed over time, which resulted in a beer that was well balanced, and something that was not cringe worthy. I wonder who is still holding onto one of this vintage? 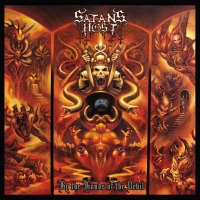 Metal Connection: Here’s a fun little tune. I mean, if you can’t have fun making Metal, then why fucking do it, right? Satan’s Host is a Colorado based band that has lived a very interesting career. 2011 saw the return of original vocalist, Harry “The Tyrant” Conklin, a.k.a. Leviathan Thisiren, who had left the band in 1988 right after only one album. From 1999 until 2010, Satan’s Host had changed their style to a more Blackened Death Metal to suit their new vocalist’s style. When Conklin returned to the band, their style went back to a Heavy Metal/Power Metal style with Blackened influences weaved within. The return album I am referring to is 2011’s By the Hands of the Devil. The final song on the album is a cover song of sorts. Musically, the song is in the tune of The Beatles hit song, “Norwegian Wood,” but with a change of lyrics to fit the band’s Satanic image. In fact, this version is quite funny. The lyrics deal with the church burning that took place in Norway performed by Black Metal musicians in the 1990’s-early 2000’s.

Burn in the flames
Of Norwegian Wood