Wow, how is it that no beers by Jolly Pumpkin Artisan Ales have been featured on this before? I remember getting JP beers back in the day as trades before they were distributed to my area. I guess they were just part of the group of beers that went overlooked and missed. Oh well, we will start with this one then, I guess. This beer is called Olas Espaciales, translated to “Special Waves.” This beer has caused a bit of controversy here in the state of Texas and the TABC (Texas Alcohol Beverage Commission). Are you ready for this nonsense?

So, apparently TABC says that it is illegal for a licensed out of state brewery to do a collaboration with a licensed in state brewpub, as it is a violation against the three-tier system. The reason I bring this up is because there is no mention of Jester King on the label at all. I asked my local friend who works for Flood Distribution who brings these amazing beers to my area, and he said that Jolly Pumpkin was kind enough to make a special label just for Texas that took off the Jester King name. Fuckin’ stupid, if you ask me!

I love the artwork on almost every single bottle of Jolly Pumpkin beer. Olas Espaciales has a great fuckin’ label, that’s for sure. It features a 70’s or 80’s style album cover looking label with all the pink and purple colors used. There is an astronaut and his dog on a strange planet looking at a bright golden archway with a large floating eyeball. They apparently came to the right place, according to the conversation those two are having. Yes, the dog spoke back. Going back to the whole TABC retardation, the back of this label features a quote from Jolly Pumpkin founder, Ron Jeffries. “Saison with Cherry, Lime, and Salt. I never had dinner with the President. I never had dinner with the President. I made this beer myself. Alone. No help given and gotten. From anyone. Certainly not, my dear friends at _____________. And money? None changed hands. None at all. No one has been paid in full. Ever. Never ever. Ever never. Ever never ever. ‘Cuz this beer is about Love, Respect, and Friendship. Nothing more, nothing less. Period. Saison with Cherry, Lime, and Salt.”

I poured this beer into a tulip style glass. The appearance was bright golden straw yellow with a light haze to it. It was initially topped with a bubbly white head that was about 1/2 an inch wide. The head quickly disappeared, leaving absolutely no lacing.

The aroma was full of lime, salt, earthiness, barnyard funk, pale and wheat malts, some wood notes, and slight cherry blended in, but not very strong. From the added ingredients , there was definitely more lime and salt in the nose.

Just like the aroma, there wasn’t much cherry in the flavor of this beer. The lime and salt hit the palate first, followed closely by the barnyard funk, wood from the barrels, some earthy flavors, light malts, and wheat. God damn, if there is any cherry used in this beer, it shows up very slightly at the end and lingers a bit, but it is overpowered by the lime and salt.

The body was not very heavy at all. Mild carbonation, and an oily mouthfeel that led to a very dry finish.

Overall, I was slightly disappointed in this beer. One of the main things I look for in each and every beer are the ingredients it says are in there. This beer said it was brewed with cherries, salt and lime. Well, the salt and lime were present, but no cherry. I was expecting a Cherry Limeade kind of flavor profile, but it was all tart sour lime and salt. Dare I say, more margarita-ish than anything else. It wasn’t a horrible beer as a whole, but it just did not deliver on it’s promises. Maybe a small tweak to this recipe and this one will be a complete winner. 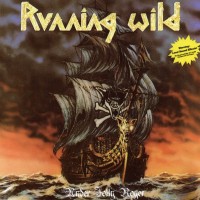 Metal Connection: Back in 2014, I used the song “Diamond of the Black Chest” from the German Power/Speed Metal band, Running Wild as a Metal Connection for Brouwerij Van Steenberge Bière Du Boucanier Golden Ale (Say that 3x fast). This is now going to be the second song I am featuring from the same album, which happens to be the title track of this 1987 full length, Under Jolly Roger. I used this song for this beer paring cause of the use of the word jolly. I found nothing else which would work here. I am not complaining though, as this is an excellent band, album, and song. After the 3o second intro of a pirate ship captain giving orders to fire cannons, the song comes in with an excellent opening riff of pure Heavy Speed Metal. This song takes you on a journey of our beloved pirate friends and their shenanigans.