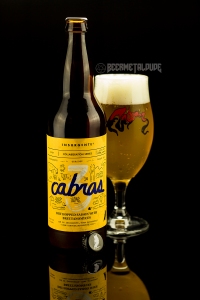 As I promised, I will still be putting up written reviews from time to time. Here is a good one I had some months back. I was doing some heavy trading with a friend of mine from Cali named Jorge Espinoza of animebeers.com, and this was one of the beers I had received in a box from him. So, cheers to that awesome MoFo right there!

This as my first beer from Cerveceria Insurgente from Tijuana, Mexico, and it was a damn impressive introduction for sure. I have yet to receive anything else by them up to this point, but I wouldn’t mind checking out their other brews.

So this one seems to be a special release by this brewery. It was a collaboration effort between Cerveceria Insurgente, Oersoep & Rooie Dop, two Microbreweries from The Nrtherlands. Despite the origins of these breweries, this beer is only available in Mexico according to the Rooie Dop website. They also claim that the name Tres Cabras, which means Three Goats is because of the use of Nelson Sauvin, Amarillo hops and refermented in bottle with Brettanomyces. My best guess was that it was named this because of the 3 different breweries involved, but whatever. I wasn’t there when they brewed this beer, so what do I know. haha!

The label is simple yet it caught my eye on the online beer shop where this was purchased, so it did it’s job. This 22 oz bomber bottle features a bright yellow label with what looks like hand drawn art by a kid, or just someone with minimal skills. (note: I still couldn’t even draw this shit if I tried!) The drawings are of different animals around a body of water. There are goats, obviously, rabbits, and chickens all around plants and water. The beer name is written in a cursive handwriting font in big bold blue letters, well at least the word Cabras is. the 3 is even larger and in white behind the Cabras word. I just think the bright bold blue across the bright yellow background is what got me. Very nice looking label.

I poured this beer into a bell shaped tulip glass by Brouwerij The Musketeers for their Antigoon beer. Tres Cabras was a hazy bright golden honey color topped with a large bubbly white head, which quickly disappeared to a thin layer atop the beer, leaving small spots of lacing down the glass.

A very well balanced aroma here. The Saison characters of wheat, hay, barnyard funk, lemon, lime, and unripe banana blend with floral hop characters and fresh cut grass. Stone fruit such as peaches, apricot are present, and let’s not forget everyone’s favorite, Brettanomyces, which intensified the barnyard funk in this beer. That funk lingered a bit after each whiff of the beer.

The taste was the same as nose. All barnyard funk in the flavor up front. The farmhosue pungency is strong with this one. Wheat and hay profiles mixed with lemon, lime, and unripe banana flavors. Nice floral and wet grass hop presence, and earthy notes. Stone fruit profiles like peaches and apricots. The Brett really intensified the barnyard funk in this beer, even in the flavor. Ever been to the zoo and walk near, or into a room with horses, or the like? Imagine that, but in a pleasant way. I know, I know, for those not familiar with this being pleasant will crucify me, but, um… Fuck you! hahaha! Cheers!

The body was light with a smooth and oily mouthfeel, which worked all the way through to the finish. Nice oily mouth coating feeling after each swill.

Overall, I was really impressed by this beer. I am a huge fan of the Saison/Farmhouse Ale style of beer. I could down this shit all day long. This collaboration beer was a big home run in my book. As I mentioned earlier, this was the first time I ever heard about these breweries, and this was my introduction beer. Way to fucking go! I will need to search the interwebs for more beers by each of these breweries, and I suggest you do the same!

Metal Connection: Might as well go with a newly discovered band since this is a new brewery to me. This is Dorso from Chile. No sure how popular this band is in their country but Dorso has been round since 1984, and has 7 full length albums and a few live albums under their belt. Not bad. The perfect song for this Metal Connection is called “Chupacabra,” and comes to us from their fifth studio full length, Disco Blood from 1998. Dorso seems to cover a wide range of topics in their music, including dark humor, which I am assuming this song falls under. I am not a Spanish speaker, so I put the lyrics in Google translate, but sometimes they look funny, and that might be the case here, but I also think the overall theme of this song is meant to be funny, yet sick and twisted. This song is well structured, and put together. A bit Thrash Metal mixed with some Groove Metal. Funny thing is, this reminds me of a song Gwar would play. Alright, mother fuckers, please check out the tune by clicking the link below. Cheers!