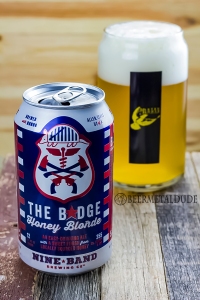 Don’t sleep for too long, cause you might miss an opening of a brand new brewery here in Texas. Allen, TX, a northern suburb of Dallas is home to a fairly new brewery that has been producing beer for the past couple of years. I speak of Nine Band Brewing Company. So far, I have had only 2 of their offerings to this point, their Pale Ale and this beer right here, The Badge Honey Blonde. I took the liberty to write down a review of this beer, and here are my thoughts.

Before I jump into the beer, let’s talk about the packaging. The Badge comes to us in a 12 oz can, usually sold in 6pks, but I was able to buy a few different cans individually at a local store. The story behind this beer name is that this is a salute to the men and women of police, firefighters, and EMS, who all wear badges. They even reference the law men of the old West as well in their statement. All of this is represented on the can. The main color of the label is blue with red and white squares down each side. There is a large crest shield which features the Nine Band armadillo logo on top followed by the EMS symbol, a couple of axes representing the firefighters, and a couple of revolvers representing the law. The beer name is written in white, with the letter A in badge being a red star. This is a very patriotic looking can.

I used a Martin House Brewing Company can-shaped glass for this. The Badge poured a hazy bright golden yellow color topped with a large 1.5 inch white foamy head. The head quickly disappeared, leaving no lacing at all down the glass.

The aroma was complete sweetness from the honey. There is a slight tartness in the nose, which I don’t know if intentional or not. Pale and wheat malts come through, There is a cereal grain bill as well. The tart sweetness lingers in the nose for a while.

Just like the nose, the honey hit right up front, followed by pale malts, wheat, and cereal grains. Biscuit bread rounded off the flavor of this beer. That weird tartness that I picked up in the nose was not present in the taste. This was just mostly sweet from the honey. The lingering aftertaste was sweet honey and the light malts and cereal grains.

Overall, this beer was not that bad, but it also was not that great. That slight tartness in the nose kind of threw me off. I would like to drink this one again to compare. Maybe I should try it on draft. Either way, as I mentioned this beer was definitely not a bad beer at all, just a bit weird. The sweetness from the honey really saved this beer for me. I am hoping to visit this brewery in 2018. I can’t wait to try the beer fresh from the source. 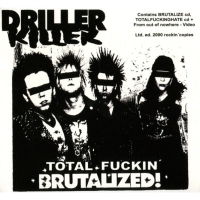 Metal Connection: Sometimes I do have to venture out of the Metal realm to get a song for these pairings. I didn’t have to go too far out of the circle though, as I am going with a band that rides the thin line of being labeled a Metal band under one of the 1,000’s of sub-genres. I am talking about the Swedish Crust Punk/D-Beat band, Driller Killer. This is the second time I have used this awesome band here on the site. They formed back in 1993, and named after the 1979 Horror classic by the same name. You can tell they are heavily influenced by the band Discharge, as most D-Beat bands are. The song I chose here, “Killer (with a Badge)” originally was recorded for their 1994 debut full length LP, Brutalize, but the version here is from a 2004 re-issue known as Total Fuckin’ Brutalized on Osmose Productions. This album featured the first two Driller Killer albums, Brutalize (1994), and Total Fuckin’ Hate (1995) together on one disc. “Killer (with a Badge)” is a short, fast, fuckin’ furious tune which could incite violence from the opening second to the end.