Alright, it’s been a while since I’ve added a written review to the site, so I decided to drink and review this IPA by Idle Vine Brewing Company out of Round Rock, TX, just north of Austin. I drank this beer about a month ago, and posted up the photo on my Instagram account (@beermetaldude). I love a brewery that is on top of their social media accounts. These guys reached out to me by commenting on the photo, and offered some free beer if I ever visit the brewery. So, of course, when I have some free time, it is in my sights to head up north to visit these guys, along with other breweries in the area. Not sure when, but this will happen soon.

I poured this beer into a Dogfish Head IPA glass, you know, because this is an IPA and all. On the initial pour, this IPA was topped with an inch wide white foamy head, which retained very well, leaving excellent lacing down the glass. The beer’s color was a semi-hazy light orange color. Nice looking beer.

The aroma was full of exotic hop characters, such as mango, pineapple, guava, passion fruit, and citrus orange. This was a surprise actually, cause I noticed that this can was about 6 months old. In all honesty, this beer held up really well over time. I will definitely need to try this beer fresh, as I can only assume these characters will be even more dominant. There was a good biscuit bread backbone behind all the fruit aroma.

The taste followed the exact pattern as the aroma. Right up front as soon as the beer hit the taste buds there were flavors of such fruit as mango, pineapple, guava, passion fruit, and citrus orange. Rounding out the taste of this beer is the biscuit bready malts, giving this beer a complete full flavor. As I said earlier, it was pretty surprising that the hop characters were so present considering the age of this beer. I have definitely had IPA’s that fell off after a couple of months, but this one was still pretty damn good. The aftertaste was full of mango, and pineapple mostly, in my opinion.

This IPA had a medium body with moderate carbonation. There was a nice astringency, which left a little bite to the mouthfeel. The finish was dry, which worked well with the lingering fruit flavors.

Overall, I was thoroughly impressed by this beer. My first impression with Idle Vine was with their Cream Ale, No Hitter. I wasn’t too fired up about that beer, but then again, this was on draft at a local spot here in San Antonio, so maybe it could have been the lines or something. I’d love to revisit that beer in the near future. After that, I have had two other beers from this brewery, including this IPA, and I can tell that these guys do make pretty good beers. Anyway, for this beer being a bit aged, which is normally a big no-no when it comes to IPA’s, this beer was impressive with how the flavors of the hops still held on here. I bet fresh, this beer is god damn awesome! 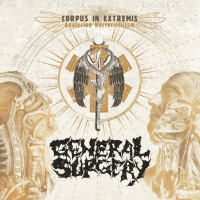 Metal Connection: Damn these beers with no clever names! At least I was able to find a very amazing Metal Connection by pairing the brewery’s name with a song title. There was a handful of songs I could have gone with here, but Sweden’s Death Metal/Grindcore band, General Surgery will do just fine. This band was born in 1988 and had a small early career only until 1991, releasing several demos, and one EP, Necrology on Relapse Records. This EP became an early classic. With the early success of the Death Metal/Grindcore band, Carcass, there was a rise of Carcass clones, and General Surgery definitely falls within this category. Early on in the band’s career, the line-up consisted of some familiar faces in the Underground Death Metal world like Matti Kärki (known for Dismember, Carnage, Carbonized, and Murder Squad), and Richard Cabeza (known for Unanimated, Dismember, Carbonized, and Murder Squad). Guitarist, Joacim Carlsson (also known for Afflicted) has been the only consistent member in General Surgery throughout their entire career to date.

The song, “Idle Teratoma Core” that was chosen for this Metal Connection comes to us from the band’s second full length album, Corpus in Extremis: Analysing Necrocriticism from 2009, released on Listenable Records. The song is fucking amazing. Sick medical lyrics, disgusting mixture of vocal styles, including a low pitch shifted style. As in typical General Surgery fashion, this song could be ripped from an early Carcass album, even though they do have their own unique twist to it.