Hey guess what? I’m drinking another can from my fridge that is well over a year old. I bet you’re thinking “Damn, does this dude ever drink beer he buys?” The answer is yes, but sometimes there are beers that just go untouched for a while. A long while sometimes. Fuck it! Anyway, I used to see Nebraska Brewing Company’s beers all over San Antonio on draft at all the usual Craft Beer watering Holes, but lately, I have only seen the cans around at stores like Total Wine (Beer Graveyard-Check your dates if you want to buy fresh). I did purchase this single can a long time ago, as I know it has been sitting on my beer fridge door for quite some time.

This comes to us in a 12 oz. can that comes equipped with a whole top pull off tab to drink straight from can. Well, as I would do that in a different circumstance, since I am reviewing this beer, I decided to pour this one into a glass. I will get into that in a minute, though. First, let’s talk about the can design. There’s no real artwork piece to focus on here with this one. It’s a bit all over the place and messy, but in an “organized chaotic” way. The can label is majority in a cream color with text in black. The other part is black with a large hop cone on it. Over the hop cone is a crest or shield that features a banner with the brewery name on it, and a silhouette of a large antlered animal. Perhaps a buck, deer, I don’t fuckin’ know, but one of those damned things! There are also 3 red stars completing this crest on there. Then there is the name of the beer diagonally written across the can in a simple text in red, silver, and black. The Nebraska Brewing stars, barley, and hops is across the bottom of the can. As chaotic as this sounds, the can really did pop out to me while sitting on the shelf. So, I guess, job well done.

As I said, I poured this beer into a glass to get the full effect for this review. I used a snifter glass from Saloon Door Brewing. This beer appeared black as night, exactly as they said it would. It was topped with a 1/2 inch khaki colored foamy head. There was excellent lacing left down the glass, as I did drink this one.

The aroma was full of dark fruit like raisins or prunes, which was pretty heavy and up front. I was also picking up some bitter sweet chocolate, cold brew coffee, caramel, roasted malts, dark rye bread or pumpernickel, and a hint of earthy hops masked behind the malt profile of this beer.

The taste has the same characteristics, although in a different order of appearance on my palette. Up front, as soon as the beer hits the taste buds, I tasted the bitter sweet chocolate, cold brew coffee flavor, and roasted malts. Caramel, and the dark fruits followed, as well as the dark bread. The earthy hops are present as well, behind main flavors of this beer. The aftertaste is nice combination of flavors, but mostly dominated by the dark bread, coffee, and chocolate.

Sitting at 9% ABV, I was and being a Russian Imperial Stout, it was a bit thinner than expected. Not that I hated it or anything, but I was just expecting a thicker beer here. It was very thin and watery. The finish was a bit dry, which complimented the aftertaste perfectly. Now, as I said before, this was a 2017 vintage, canned 01/04/17 to be exact, so at this point, being at the end of November, we are looking at a beer that is almost 2 years old. Maybe this played a factor in the overall flavor and body of this beer, but I had never had this beer fresh, and not sure if I will see this on draft any time soon. Maybe I will check dates on the cans and pick up a new batch if it’s still being distributed here to San Antonio.

Overall, I did this give this beer a 3.75/5 rating, which is a good score in my book. 4 or higher means remarkable to near perfect, but this score means that I highly enjoyed it, and will crush this beer again, as it was an easy drinking 9% Russian Imperial Stout. The body is where this beer hit the low notes for me, as I said it was just a bit thinner than expected. So, Nebraska Brewing releases Black Betty, which is a barrel aged RIS, and a beer highly rated. Little Betty is the base beer before it gets barrel aged, so if this is your thing, than seek this beer out. It was a very good beer. 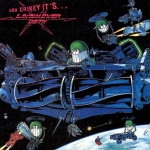 Metal Connection: I have used this band before here on BeerMetal.net. I mean, for all good reason, their songs kick major fuckin’ ass. I am talking about the Thrash Metal/Crossover monsters from England named Lawnmower Deth. Yes, Lawnmower Deth. What a crazy name, and their music matched the craziness. Formed in 1987, these crazy UK kids released 2 demos, and a split album before signing to Earache Records, and releasing their debut full length album, Ooh Crikey It’s… Lawnmower Deth. This is where our Metal Connection song comes from. For Little Betty Russian Imperial Stout, I went with the song “Betty Ford’s Clinic” for an obvious use of the name Betty. This song is short, fast, metal, and punk. The repeating line of “Alcohol at Betty Ford’s” is a nice touch to have this song appear as a Metal Connection here on BeerMetal.net. Click the video below to hear this amazingly fun little tune.