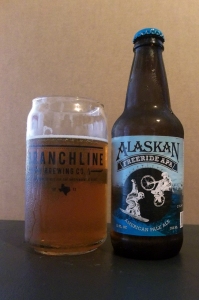 When Alaskan Brewing Company became available here in San Antonio, TX, I was pretty excited because I had heard good things about their beer. I have tried their Amber, IPA, Black IPA, White, Summer, Winter, and Smoked Porter, most of which were met with mediocre reviews. I wasn’t very impressed by their lineup. Now I didn’t say I didn’t like them at all. I just wasn’t blown away by them, like I am with other breweries.

With that being said, here I am staring at a newly purchased bottle of Freeride APA. On my drinking days, I would open the fridge, and basically push this bottle aside as I grabbed for something else behind it. I knew one day, though I would have to drink it. Well, here we are…

Using a Branchline Brewing Co beer can shaped pint glass, this beer poured a hazy golden color with a finger wide light beige head which held up pretty good, leaving a nice soapy lacing down the glass. Pretty nice looking beer. So far so good with this one.

Really huge aroma in this beer. My nose was instantly hit with lot of citrus flavors like orange peel, and a little grapefruit. There are hints of of a floral smell mixed in giving this an extraordinary hop presence for an APA (American Pale Ale). If I wouldn’t have known any better, I would have said this is an America IPA (India Pale Ale) based on the aroma. There is a presence of the malts in the smell hiding behind the hops. Rounding off the smell, there are scents of biscuit, and caramel. Two for two here. Chances are that I will like this one!

Taste wise, we have an IPA, I swear we do! This has such a hop profile in it’s flavor. It is all bright, crispy citrus and earthy pine up front, with a bready malt body, and a mix of floral hops and caramel in the finish. This is a very well balanced beer. I still say this is an IPA, though. This beer screams IPA to me! The body is medium, and there is a bit of a carbonation bite here. A perfect feel for the flavors.

Overall, I will say that is by far, my favorite Alaskan Beer so far. I will be purchasing this beer again for sure and so should you. For you that have not tried any Alaskan beers yet, do yourself a favor and start off with this one, cause it will give you a good impression about them.

When looking at the label and seeing a snowboarder and bicyclist, first band that came to mind was an old school band named AVERSION and their song “Down this Way” from their 1992 album, Fit to be Tied. Their style of Skater Thrash reminds me of music that would be played on a video clip of bike and snowboard wipe outs!  So enjoy this beer, and thrash away my friends!